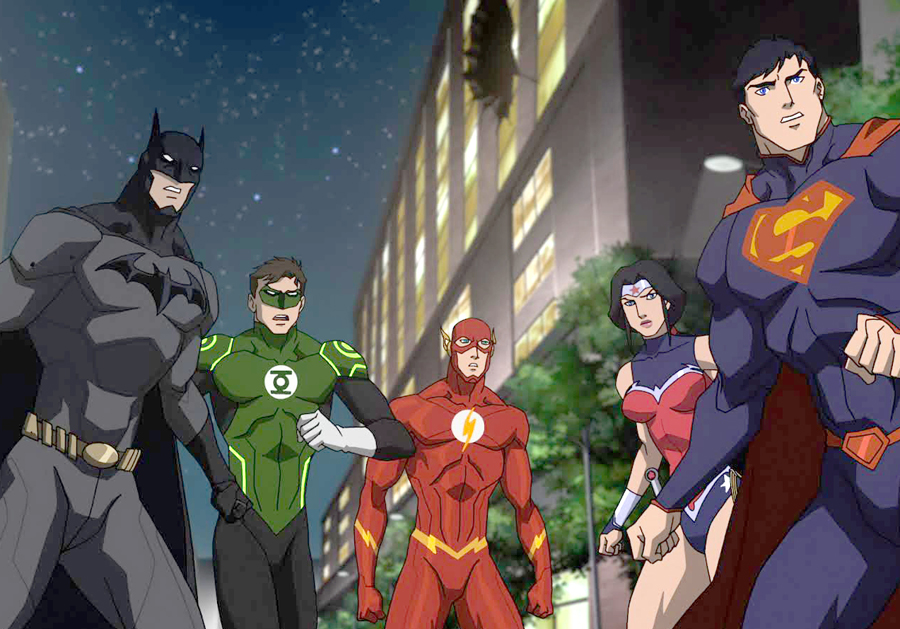 Ever since director Zack Snyder hinted that his upcoming Man of Steel sequel, still tentatively titled Batman vs. Superman, would serve as a direct lead-in to the long-rumored Justice League movie, fans have accused Warner Bros. and DC Entertainment of rushing things in order to replicate the phenomenal crossover success of Marvel’s The Avengers. Others have lambasted DC for allowing its rival to take the lead in the first place, citing the abysmal Green Lantern and other failed attempts to expand its stable of heroes beyond Batman and Superman as proof that Marvel’s meticulous world-building model can’t be topped. A League of Their Own · Batman, voiced by Jason O’Mara, and his fellow superheroes must unite against interdimensional tyrant Darkseid, voiced by Steve Blum in Justice League: War. – Photo courtesy of Warner Bros.

Both of those criticisms are perfectly valid, so long as we’re talking about live-action films. With the exception of Christopher Nolan’s groundbreaking Dark Knight trilogy, DC has struggled to match Marvel’s glib, fanciful energy and its ability to create an intricate yet accessible “shared universe.” Yet the exact opposite holds true for the field of animation, where DC has been dominating its old foe for more than two decades.

For years, one of the only major complaints about DC animation was its lack of a single unified line of continuity. That changed last week with the release of Justice League: War, the newest installment of the ongoing DC Universe Animated Original Movie series and the first to be set within DC Comics’ still-controversial “New 52” continuity, a rebooted timeline designed to streamline decades of cluttered narratives and draw in a new generation of readers.

Based on the first run of Geoff Johns and Jim Lee’s Justice League: Origin comic — the same series that launched the “New 52” back in Fall 2011 — Jay Oliva’s film follows Batman (Jason O’Mara) as he encounters Superman (Firefly’s Alan Tudyk) and the Green Lantern (Justin Kirk) for the first time while hunting down a cabal of interdimensional kidnappers in the employ of the evil deity Darkseid, played by voice-over maestro Steve Blum. The ensuing battle between the superheroes and Darkseid’s legion of “Parademons” ultimately leads to the formation of the Justice League, including founding members Wonder Woman (Michelle Monaghan), The Flash (Christopher Gorham), Cyborg (Shemar Moore) and Shazam (The Lord of the Rings’ Sean Astin).

Producer James Tucker recently announced that DC intends to release three straight-to-DVD animated features every year. Two of them will take place within the same continuity and the third will either be an original story with DC characters or an adaptation of a pre-existing work. Some adaptations will be brought into the new continuity, including this May’s Son of Batman, which takes Grant Morrison and Andy Kubert’s celebrated 2006 graphic novel Batman and Son and repurposes it as the follow-up to Justice League: War. Another upcoming project, this fall’s Batman: Assault on Arkham, will apparently take place within the world of the massively popular Arkham Asylum video games.

Son of Batman, directed by Avatar: The Last Airbender veteran Ethan Spaulding, is shaping up to be the most exciting of DC’s 2014 releases for a number of reasons. First of all, it will feature the animated debut of Damian Wayne, Batman’s fourth Robin and the genetically perfected offspring of Bruce Wayne and supervillainess Talia al Ghul. Despite being a relatively recent addition to the Bat family, this caustic, pint-sized assassin became an immediate fan favorite in the comics, and the outcry over his death in the pages of Morrison’s Batman, Inc. made international headlines last year.

If the idea of Batman discovering that he has a 10-year-old son who’s been trained to kill from birth by the League of Assassins fails to pique your interest, you might want to consider turning in your geek card. The film also boasts a surprisingly high-caliber voice cast, including the great Giancarlo Esposito as immortal arch-criminal Ra’s al Ghul. Esposito might have been talked into pursuing the role by his Breaking Bad co-star Bryan Cranston, who gave an excellent performance as then-Lieutenant Jim Gordon in 2011’s Batman: Year One.

While its animation team busies itself with a seemingly inexhaustible supply of new projects, DC is also making significant inroads with other mediums, including live-action TV. The CW’s Arrow has proven itself a surprise hit with an increasingly rabid fanbase — giving the series a distinct advantage over Marvel’s disappointing Agents of S.H.I.E.L.D. on ABC — and shows based on The Flash, obscure do-gooder Hourman, chain-smoking occult detective John Constantine and Jim Gordon’s early years as a Gotham City detective are already in development. The superhero craze has officially expanded to the small screen and VOD markets, and DC is taking the lead at a pace worthy of the Scarlet Speedster himself.