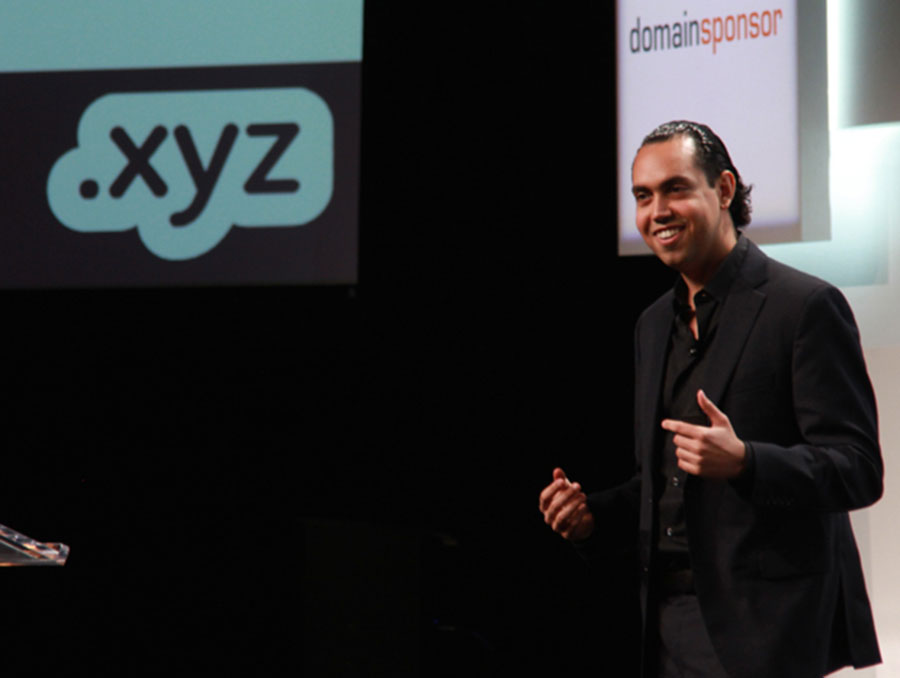 Located in beautiful Beverly Hills lies an interesting new startup. Exposed brick walls covered in graffiti-style art provide a backdrop for huge, colorful Gibson guitar statues that almost touch the ceiling. These decorations don’t look like they belong in a tech office, but this is not just any startup. This is the home of .xyz, a fresh new gTLD (generic top level domain) founded by Daniel Negari, a USC alumnus who graduated in 2008.  .xyz is in the business of selling website domains. Starting at $9.99 a year, customers can purchase a website domain with a .xyz ending, giving them more options for customization. Popular gTLD’s include .com, .info, .net and .org. Since officially launching on June 2, .xyz has garnered more than 450,000 registrations, including some in China. .xyz even has a celebrity client; NASCAR driver Kyle Busch uses .xyz as a URL shortener on his Twitter account.

.xyz is different from .com and the like because according to production manager Shayan Rostam, who is also a USC grad, says the value of .xyz lies in its memorability and ease of use. Currently, there are about 114 million registered domains with a .com ending and more than 270 million domains in existence across all domain extensions. Because most of the desirable domain names are already registered, a new domain extension can help a consumer find a more simple extension.

“Why would you pay more for a .com when you can get something that’s newer, fresher and memorable?” Rostam said. “It’s really been appealing to a younger demographic who didn’t necessarily grow up thinking about .com. It completely makes sense to them; they don’t even have to know about domain names to know that “xyz”  is the ending.”

Negari and Rostam mentions that on average, someone who uses GoDaddy.com, a popular website domain service, will search nine or 10 times before settling on a suitable domain name. Even then, many of the simple and memorable domain names are taken, making it necessary to incorporate combinations of symbols and numbers that can be confusing and long.

“We’re finding a lot of app developers and discovering that much of the next generation of internet users, the revolutionary people who are coming up with new ideas, [want] something shorter,” Rostam said. “When you give them the choice of a short ending like .xyz or one of those three word dot coms with a couple dashes, they’re going to choose .xyz every day.”

Rostam attributes much of the company’s success to the tight-knit team behind the scenes. Negari and Rostam, along with many of the staff at .xyz, were both members of the Beta Theta Pi fraternity at USC and have remained friends since college. The close connections between the team members helped facilitate the company’s growth.

“We’ve been growing very quickly and we’re trying to hire Trojans and people we have a history with,” Rostam said. “And who we know will be loyal to the company and work hard and basically believe in our vision of making .xyz the next dot com.”

.xyz’s growth can be attributed to the hard work of the team.  “Much of our success has come from people who are behind the company and who work very well together and spend a lot of time together,” said Rostam.

Though he had the support of his fellow Trojans, Negari did not always set out to become a registry operator. While he was still a student at USC, Negari started a profitable real estate business. Needing somewhere to invest his profits.

“I was taking my profits and investing in domain names and it got to a point where I needed to form a company to hold my assets. That’s when I started Cyber2Media,” Negari said. I needed to do something with them, so I hired developers and programmers and designers who could take my ideas online and that’s how it all started.”

.xyz  was created three years ago when the organization that regulates the  internet, The Internet Corporation for Assigned Names and Numbers (ICANN), allowed the privatization of top-level domain extensions.

“I was on the hunt waiting for ICANN to open up their application round and I always wanted .xyz,” Negari said. “I had bought XYZ.com throughout this process and I was planning on being a registrar when all of a sudden ICANN opened up the window to allow people to apply for new generic top-level domains.”

Abandoning his plans to become a website registrar like Go Daddy.com, Negari put in an application and a $185,000 non-refundable fee to acquire the .xyz domain extension. Negari later canceled his registrar and decided to go full force into the registree business. At age 28, Negari, CEO of .xyz and its parent company, Cyber2Media, is now ICANN’s youngest registry operator.

“In 2006, I met a guy who owned the .ws country code,” Negari said. “He was advertising it as a website and it kind of inspired me. I was on the hunt waiting for ICANN to open up their application round because I knew I always wanted .xyz.”

Though .xyz is enjoying rapid growth, none of it happened overnight. Negari advises aspiring entrepreneurs and businesspeople to gain as much experience as possible.

“Put yourself out there and work for free, Be an intern, Find the smartest people you can find and put yourself around them,” Negari said. “Be prepared to do what it takes, don’t complain and have fun. That’s really the mantra we have here. We’re all friends who work hard and play hard.”

New restaurant opens down the road from USC
Scroll to top