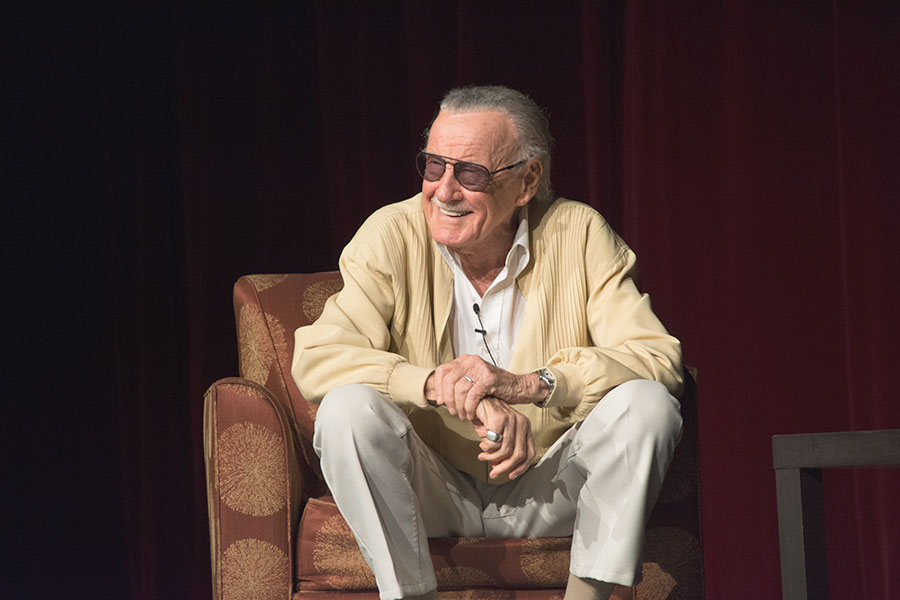 Chairman Emeritus of Marvel Comics and esteemed comic book creator Stan Lee discussed his professional accomplishments, chatted about the Marvel Universe and joked around with a capacity crowd at Bovard Auditorium Tuesday night at the Stan Lee: A MARVELous Mind event hosted by the Speakers Committee.

David Belasco, co-director of the Lloyd Grief Center for Entrepreneurial Studies at the Marshall School of Business, moderated the event and lauded Lee for his innovation in the entertainment industry.

“[Marvel fans make up] this community that’s been built [since] before there was social media,” Belasco said. “You were actually a pioneer in this.”

Lee told Belasco about his experience growing up in the Bronx during the Great Depression. Lee worked a series of odd jobs as a teenager before eventually being hired as an office assistant in the comics department of a publishing company at 17. By 18, Lee’s supervisors had been fired, and he was single-handedly running the department.

Lee said at first he was embarrassed about working as a comic book writer, so much so that he decided to use an abbreviated version of his name.

“I kept wishing I could get out of it,” Lee said. “I was so embarrassed about working on comic books that I didn’t want to use my real name because I thought one day I would use it to write the great American novel.”

Lee attributes much of his success in comics to luck and to the artists he worked with throughout his career, including acclaimed comic book artists Jack Kirby and Steve Ditko.

Lee said that one of the reasons he believes Marvel became so successful was his implementation of a new method for creating comic books. Instead of sending a first draft of a story to an illustrator for that illustrator to interpret, Lee would explain the story he hoped to write to the artist, and after receiving the finished product, he would add the dialogue, captions and sound effects based on characters’ expressions or the scene depicted in the illustration.

“The artwork and the dialogue constituted one illustration in a sense, and that’s why our stuff, I think, did better,” Lee said.

Lee also joked about Marvel’s rivalry with fellow comic book publisher DC Comics, the company behind superhero characters such as Superman and Batman. Though Lee explained that he respects DC’s work and is friends with many people at the company, he said that Marvel often sets the comic book trends, only for DC to follow.

Lee shared an anecdote to illustrate the differences between the companies.

“I tried to be incredibly scientific in our stories,” Lee said. “For example, when Superman flies, he has no visual means of propulsion. Now take Marvel: I wanted Thor to be able to fly, so I found the most scientific method you could find. He takes his hammer, which is attached to his wrist by a leather strap, and he twirls the hammer as fast as a propeller and then it just goes up into the air — but he’s attached to it.”

Though many of his characters have endured for many years, Lee believes that everyone can relate to superhero comic books and movies, which allows them to remain popular today.

“All of us loved fairy tales when we were young,” he said. “We loved stories of monsters and witches and dragons. We loved those stories, and that’s why fairy tales have endured forever. Superhero comics are the closest things to fairy tales for grown ups. You sort of recapture the fun you had when you were a little kid.”

The event concluded with a Q & A session with Lee and students in the audience. Students asked Lee about his thoughts on the Marvel movies, the diversity of the Marvel Universe, his favorite heroes and his own cameos in the films.

Lee said that he expects that all the characters he has created will eventually be incorporated into films. He also mentioned that he is working on several projects internationally with his media production company, POW! Entertainment.

“I’m happy doing things,” Lee said. “It’s very important to do things. It doesn’t matter what they are, just do them.”

Daniele Watts needn’t apologize for standing up to racial profiling