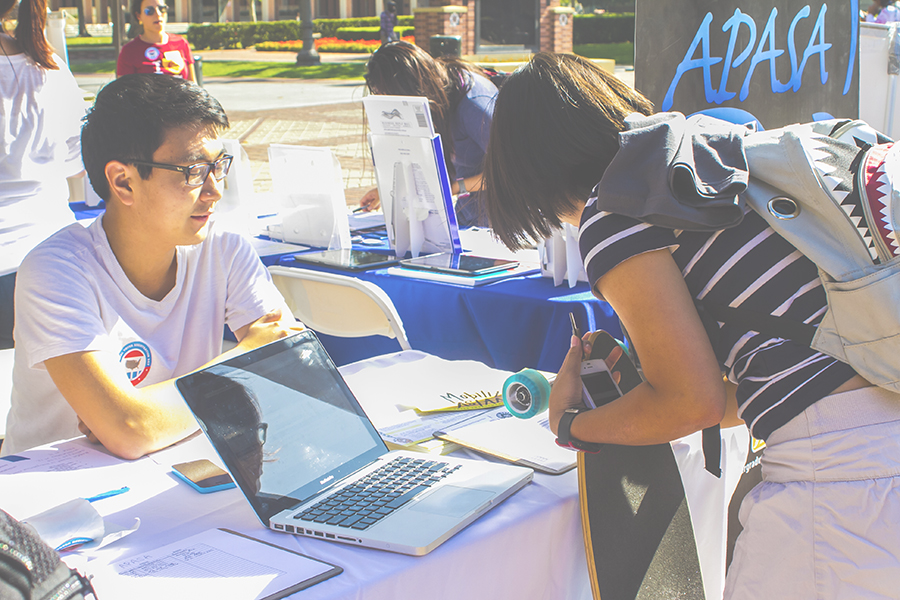 Students gathered in Hahn Plaza on Tuesday for a National Voter Registration Day event, which aimed to encourage student participation in the upcoming midterm elections this November. Get out the vote · Alex Kanegawa, a sophomore majoring in print and digital journalism, registers students to vote in Hahn Plaza on Tuesday. – Liliana Scarlet-Sedano | Daily Trojan

The event featured guest speakers from the local political sphere. Commissioner Mike Davis, Assemblyman Reggie Jones-Sawyer and California Republican Committeeman Shawn Steel spoke at the event about the importance of student involvement in the upcoming elections.

“These speakers may all be selecting different candidates for governor in November, and their ballots may look completely different, but they all ultimately want what is best for the community and for students,” Schnur said.

Alec White, president of the USC College Democrats hoped that the event would help increase voter turnout for USC students in order to make sure that student voices are heard in government elections.

“It’s definitely important for students to vote in the midterm elections because politicians generally don’t know what we want,” he said. “It’s important to get them to listen and to look at the issues that students are having more closely.”

Jennifer Massey, president of the USC College Republicans, highlighted the power that students can have in elections.

“Millennials really would have a large voice if they would all come out and vote,” Massey said. “In the last elections in particular, in 2008 and 2012, they came out in really large numbers to vote for the president and other candidates and they really showed how strong they can be.”

On Election Day, Nov. 4, polls will be open at several locations in the community surrounding USC, with maps and signs directing students where to vote. There will also be shuttles to various polling locations throughout Los Angeles.

Various student organizations tabled at the event. Additionally, every student who pledged to vote on Election Day was entered into a drawing for USC prizes, including t-shirts and gift cards.

Massey also hoped that the nonpartisan nature of the event would provide an opportunity to educate students about different political ideologies.

“My main goal, in general with all of these events, is to try to show the students on campus both sides of issues,” she said. “I just want to give students the facts from both sides and allow them to decide for themselves what they believe.”