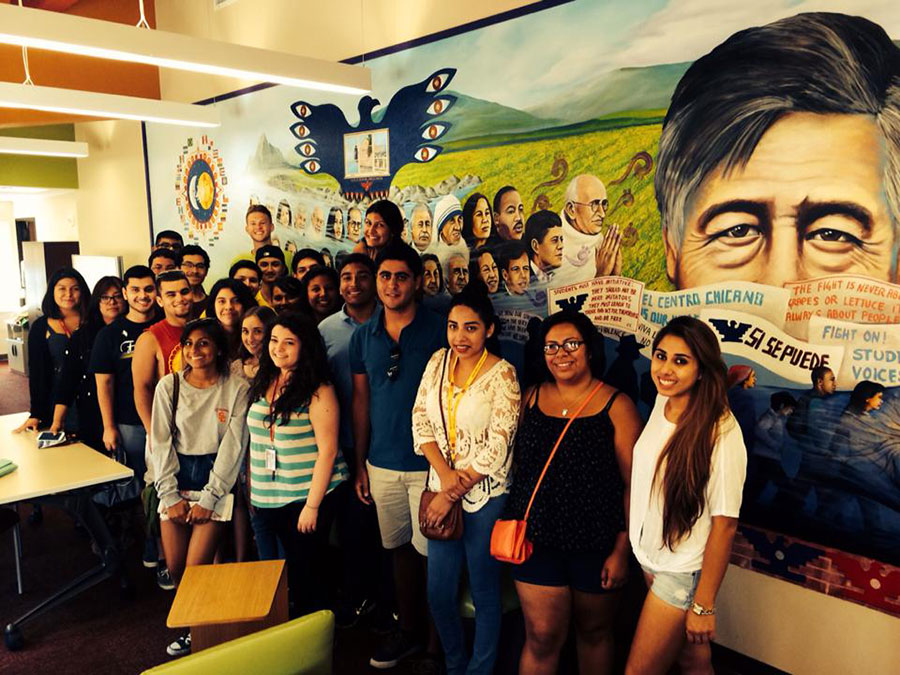 El Centro Chicano and the Office for Residential Education are marking the 40th anniversary of the Latino Floor at Fluor Tower with a celebration to honor the impact the floor has had on residents over the years. Cultural roots · Residents of the Latino floor are pictured on a visit to El Centro Chicano. The floor aims to create positive space for students. – Photo courtesy of William Vela

The floor, named “El Sol y La Luna,” was founded in 1974 and still exists as a place for those interested in Latino culture or seeking a close-knit community to live. The idea for the floor was conceived by Sal Godey, who also served as the first Residential Advisor on the men’s Latino floor.

“In 1972, when El Centro was founded, there was a huge need for a center and for more support at all universities for Chicano and Latino students. When [Godoy] was here in 1973, I think he saw the void and as a student he probably had an activist mentality and took the lead on it,” said William Vela, director of El Centro Chicano.

The anniversary will be celebrated by an event on Wednesday in the Ronald Tutor Campus Center Ballroom. The celebration will include a performance by Trio Ellas, a Latin-American music group based in Los Angeles. There will also be numerous speakers at the event, including Mary Ann Pacheco, who co-founded El Centro Chicano as a student, and Vela.

El Centro Chicano, one of many Latino student organizations on campus, led the planning of the anniversary celebration.

“Our main goal is to make sure we support Latino students in every way possible — whether that be academically, personally or leadership-wise,” Vela said. “We want to help them in their transition to USC and give them all the support necessary ultimately to graduate and be successful and connected just like any other student would be.”

El Centro and Residential Education also partnered with the Latino Student Assembly and Hermanas Unidas to plan and coordinate the event.

The Latino Floor strives to be more than just be a place where students live. It attempts to create a community and give residents a home away from home. Olivia Ceja, the current RA for the Latino Floor this year, returned after living as a resident on the floor last year.

“I wanted to give back to what I had been a part of last year,” she said.

One of the traditions of the Latino Floor is an annual beach trip to Santa Monica.

“It’s so funny to look back at the pictures because everybody didn’t know each other and now I see them going into the cafeteria as a big group,” Ceja said. “I’ve seen them progress as a family.”

Other residents said that that the closeness among floor residents have eased the transition to college.

“I felt like I needed that sense of familia because I come from a really close family,” said Carolina Lopez, a freshman majoring in biological sciences and a current resident of the floor. “Even though I don’t live far away from home I always want to have someone I can connect with.”

Relationships, including two alumni marriages, have formed between residents and often last long past college.  Fabiola Bermudez and Al Bermudez, two USC alumni who lived on the Latino Floor from 2002 to 2003, met each other while living on the floor and eventually married. They also still keep in contact with other floormates.

“Of course with social media it’s easy to stay in touch with people, but I still have contact with people who I met while living on the floor, including my best man,” Al Bermudez said.

Among those involved in the Latino Floor was an overwhelming sentiment that the floor has created a presence on campus and impacted the USC community at large.

“We’ve had more students who aren’t Latino live on the floor. The floor is not only supporting new freshman Latino students, it’s supporting students who want to find out more about the Latino community and personally want to build relationships, practice their Spanish or know more details about our community,” Vela said. “The program has been able to support these students and many of the results have been our strongest leaders.”