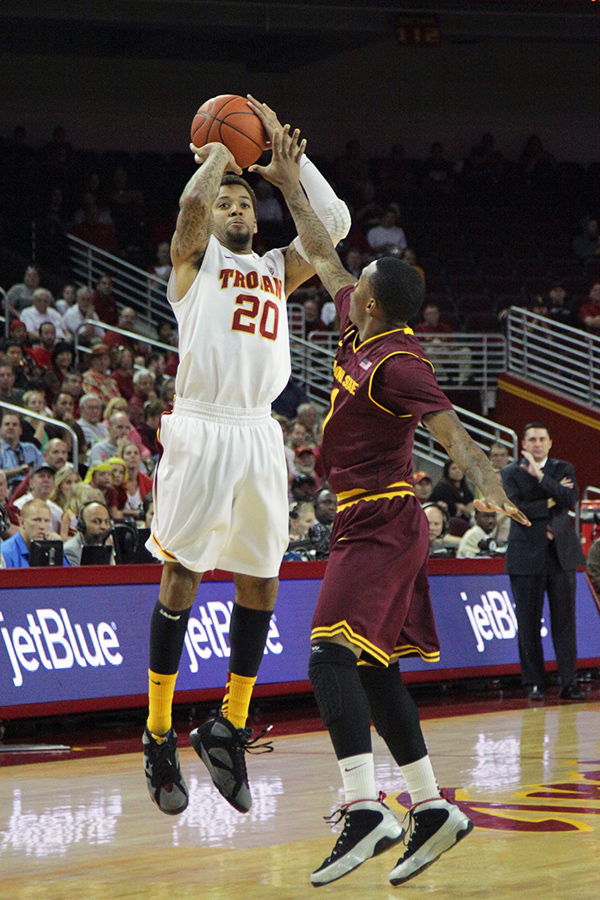 The USC men’s basketball team will attempt to bounce back from its season-opening loss to Utah State as it returns to the Galen Center tonight for the first home game of head coach Andy Enfield’s USC career against Cal State Northridge at 8 p.m. The Trojans (0-1) were outlasted by an experienced Utah State team in their season opener, as the Aggies (1-0) pulled away in the second half to secure a 78-65 win in Enfield’s debut. Utah State’s Preston Medlin, who led the team in scoring last season, scored 17 points as one of  four Aggies in double-digits. USU led 40-33 at the half and pulled off runs of 16-5 and 9-0 to jump out to a 65-44 lead and earn the victory.

Cal State Northridge (1-0) finished 14-17 last season, along with a 5-13 record in conference play to finish ninth in the Big West conference. The Matadors started the season 6-0 but were unable to keep that momentum up throughout the year, missing out on an NCAA Tournament berth for the fourth straight season. Guard Stephan Hicks led the team with 15.7 points per game and added 7.0 rebounds and 2.0 steals per game. Forward Stephen Maxwell averaged 14.6 points and 8.3 rebounds per game last season while playing in all 31 games, and guard Josh Greene had 14.5 points and 3.7 assists per game.

The Matadors opened their season with an 86-74 win over Hope International. Maxwell led the team with 23 points and 12 rebounds, while Hicks contributed 20 points and 9 rebounds.

The last time these two teams faced off was Nov. 11, 2011 at the Galen Center, which resulted in a 66-59 win for the Trojans. Former players Aaron Fuller and Dewayne Dedmon led the scoring attack with 16 points each, while former guard Maurice Jones scored eight of USC’s final 12 points to keep the Matadors from overcoming a 13-point deficit. Hicks led the Matadors with 16 points. Wesley, the only player remaining from the team that participated in that game, played 33 minutes and had five points and eight rebounds.