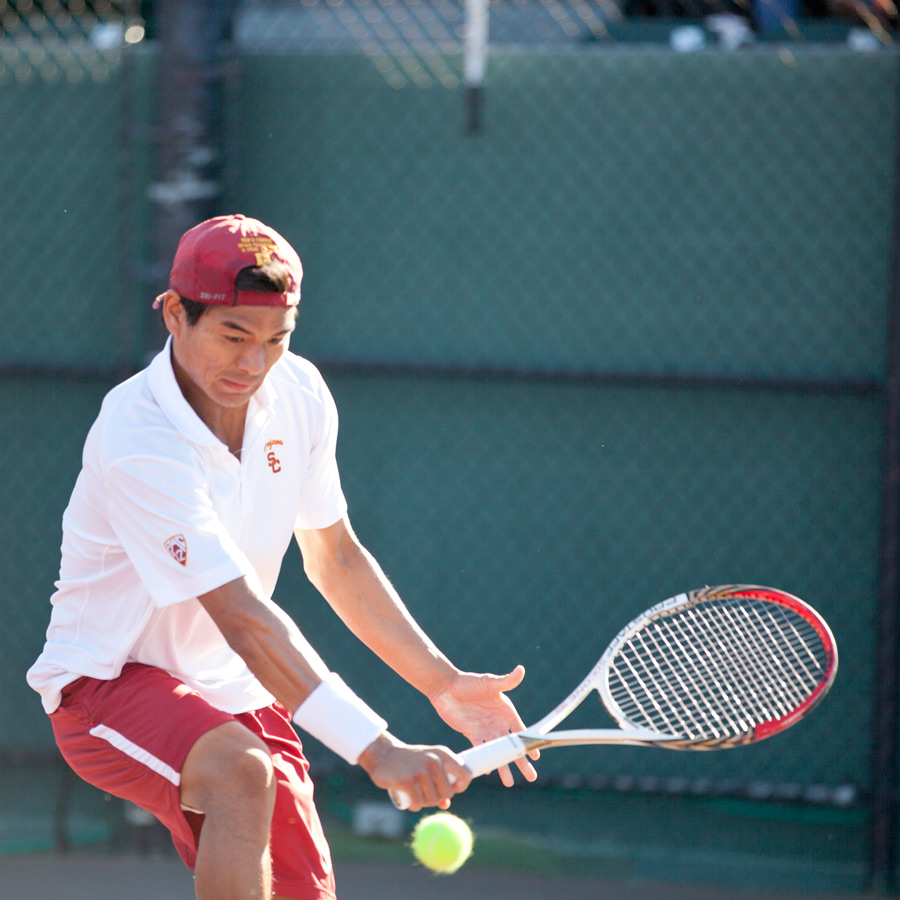 After a disappointing 5-2 loss at No. 4 UCLA on Tuesday, USC’s No. 2 men’s tennis team hopes to bounce back today at the University of San Diego. Against the Bruins, USC (8-2) won the doubles point to take an early 1-0 lead, but lost four straight singles matches to concede the match.

The team hopes to have better luck against USD today and in the Pacific Coast Doubles Championships in La Jolla, Calif. this weekend.

“We want to get back on court and play,” USC head coach Peter Smith said. “We’ve got to be able to stand up for ourselves.”

The Toreros (3-3), who are ranked No. 62 in the nation, will also be looking to get back on the right track after suffering a narrow 4-3 defeat at the hands of No. 33 South Carolina last Sunday.

Clarke Spinosa is USD’s only ranked player in singles, sitting at No. 61 in the nation. Meanwhile, USC will bring four ranked players into the matchup: senior captain Ray Sarmiento (No. 6) and juniors Yannick Hanfmann (No. 10), Jonny Wang (No. 43) and Roberto Quiroz (No. 80).

Spinosa leads the way for the Toreros in doubles as well. He and doubles partner Filip Vittek are ranked No. 30 in the nation together, while USC’s Sarmiento and Hanfmann sit at No. 12.

Around this time last year, USC took it to the Toreros in San Diego. The Trojans dialed up a 6-1 victory at USD. USC faced off against USD again later in the season, where the Trojans took down the Toreros 4-1 in the second round of the NCAA tournament. USD earned its sole point in the match when Spinosa upset Sarmiento by a score of 0-6, 6-1, 6-1.

The Trojans hope to extend their winning streak against USD today, and a win over the Toreros would be especially sweet considering the connection between the two schools: USD head coach Brett Masi.

Masi served as the Trojans’ assistant coach from 2005-2009, when he helped the team win its first of four consecutive national championships.

“He’s probably one of the closest people to me in my life, and I love him,” Smith said of Masi. “He’s like a brother. [I] just want to kick his butt, bad.”

Following the match against USD, the Trojans will compete at the historic Pacific Coast Doubles Championship at the La Jolla Beach and Tennis Club. The tournament second-longest running tournament in the United States, starting in 1890.

This tournament is open to people of all ages, not just college tennis players, and doesn’t count toward the Trojans’ wins and losses. This, and the fact that just a few steps away from the courts is the pristine beach and beautiful Pacific Ocean, creates a laid-back atmosphere — a welcome break from the normal stress of being the most successful team in the history of college tennis.

“I think the tournament relaxes us, which makes us last longer in the regular season,” Wang said.

Though the atmosphere might be low-pressure, the tournament still represents an opportunity to scout some Pac-12 teams, as players representing UCLA, Stanford and Cal, among other schools, will be competing.

The Trojans might even get a chance for a rematch with some Bruins at some point in the tournament. Last year, USC’s then-sophomore Eric Johnson and then-freshman Max de Vroome advanced to the finals of the tournament, where they faced UCLA’s Marcos Giron and Dennis Novikov. The Trojan duo was playing together for the first time all season, but put up a fight against the talented Bruin pair, eventually falling 7-6 (6), 3-6, 4-6.

The forecast calls for rain all weekend, but the Trojans are determined to make the best of the situation and enjoy the break from the stress of competition.

Today’s match against the Toreros begins at 2 p.m., and the doubles tournament runs today through Sunday.