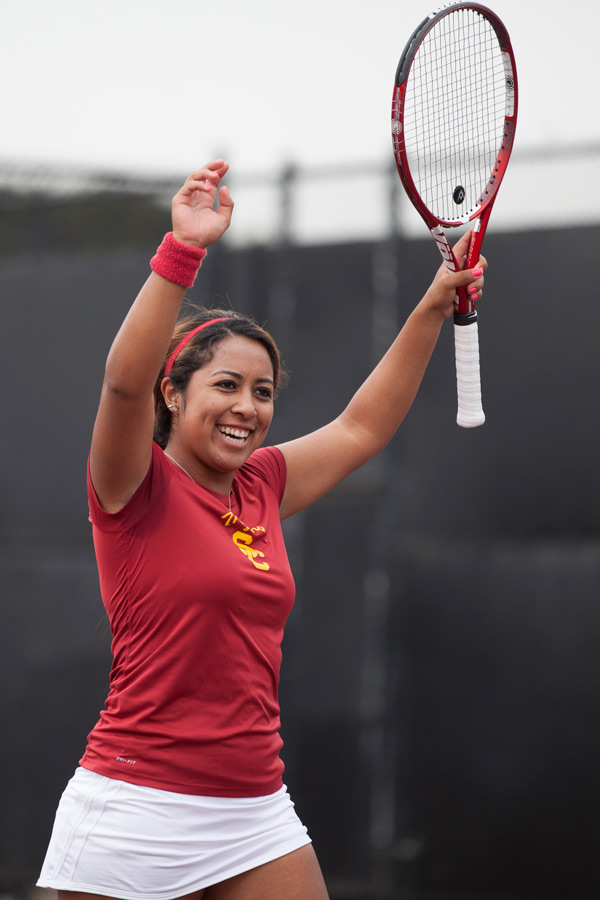 The sun never stopped shining at Marks Stadium yesterday afternoon, allowing the USC women’s tennis team to pick up its fourth consecutive victory. The No. 6 Women of Troy (7-2, 0-0) avoided the threat of rain and defeated St. Mary’s 6-1 behind dominant efforts in singles and doubles action. Starting off the day was the 19th-ranked doubles team of senior Kaitlyn Christian and junior Sabrina Santamaria, who finished off the Gaels’ Jenny Jullien and Catherine Leduc by a score of 8-0. Freshman Zoë Katz and senior Brynn Boren, ranked No. 8 nationally, secured the doubles point for USC shortly after, defeating Parminder Kaur and Danielle Flores 8-2. It has been all good news recently for Katz, who was named the Pac-12 Player of the Week after clinching victories over San Diego State and No. 4 California in her previous two outings. Seemingly on their way to a doubles victory for USC was the remaining team of juniors Giuliana Olmos and Zoë Scandalis, whose match was suspended at 6-2. Olmos and Scandalis are ranked sixth in the nation.

The singles portion of the match seemed to move just as quickly, with the Women of Troy claiming the three wins they needed for victory in quick succession. Sophomore southpaw Ellie Yates got things started with a 6-3, 6-1 win over Jade Frampton. Not far behind was Christian, who took down Leduc 6-1, 6-0. Olmos, the nation’s 65th-ranked singles player, then picked up her team’s fourth and final necessary point with a 6-0, 6-2 victory over Kaur.

Still left to play individually were the Women of Troy’s top-three seeded singles players: Santamaria, Boren and Scandalis. Seventeenth-ranked Santamaria scored an impressive 6-1, 6-4 win over No. 6 Julien, while No. 30 Scandalis picked up a dramatic 6-3, 3-6, 10-8 over No. 69 Jamie Pawid. USC’s only individual loss of the day came from Boren, who fell to Flores 6-4, 7-6.

Though she has lost her last two singles matches, Boren’s performance yeterday was a promising sign. The ITA All-American transfer from Tennessee struggled with injury throughout last summer and missed several matches earlier this season. Playing in the competitive No. 2 slot, the Laguna Niguel, Calif. native has shown steady improvement in her matches over the past few weeks.

Yesterday marked USC’s second win over St. Mary’s this year; the two squads first met in the championship of ITA Kick-Off Weekend last month. Last time, the Women of Troy completed a 4-0 sweep. This victory was especially sweet for Santamaria, who got another crack at defeating Julien after the pair’s previous match was suspended. In January, the two appeared to be heading into a third, deciding set when the match was called after a USC victory.

The Women of Troy will now travel to the Lone Star state to take on No. 26 Texas on Sunday before returning to Los Angeles for a huge home showdown with No. 2 UCLA next Friday.

The Bruins boast two of the nation’s top 10 singles players in No. 3 Robin Anderson and No. 9 Chanelle Van Nguyen, along with the top-ranked doubles team of Anderson and Jennifer Brady. The Women of Troy will attempt to avoid the fate of their male counterparts, who fell to the Bruins 5-2 last Tuesday.

Women of Troy gear up for season opener