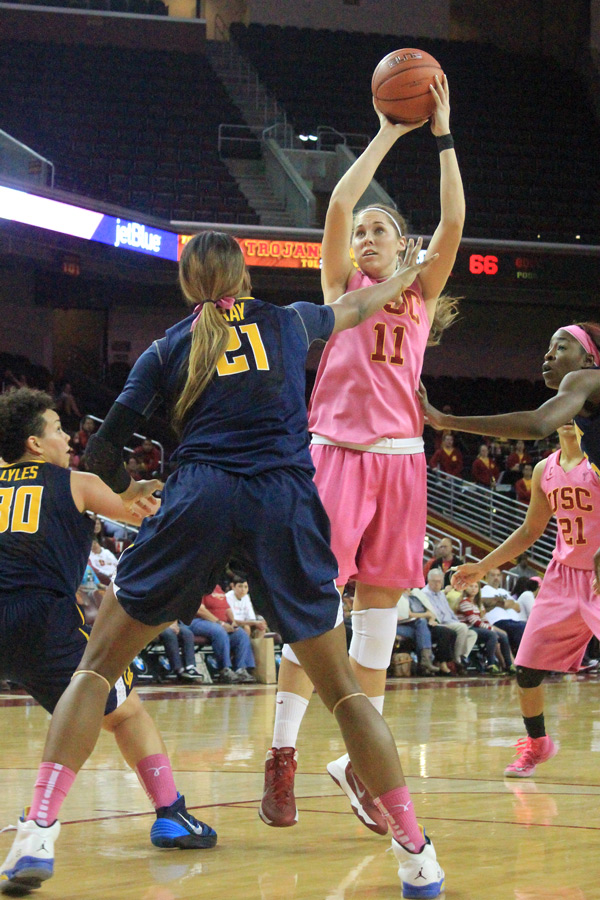 Senior forward Cassie Harberts was named to the All-Pac-12 Team for the second consecutive year on Tuesday, leading four other Women of Troy to receive All-Conference honors ahead of the Pac-12 Tournament on Thursday. Best of the best · Senior forward Cassie Harberts was named to the All-Pac-12 team yesterday for the second straight season. Harberts averaged 16.2 points per game this season after posting an 18.0 average in 2012-2013. – Ricardo Galvez | Daily Trojan

In head coach Cynthia Cooper-Dyke’s first season at the helm, Harberts was the standout star for the Women of Troy en route to their 18-12 (11-7) record and fifth-place finish in the Pac-12. The four-year starter led the team in points per game (16.2), rebounds per game (7.5), minutes per game (32.9) and blocks (25). She asserted herself as the fulcrum of USC’s offense down low in the post, constantly drawing double-teams and fouls, as she led the team in free throw attempts (214) while converting 57 percent of her tries from the line. Harberts was one of 15 players and seven returnees to be named to the squad.

Harberts tied three others for USC’s program-record 128 appearances in the Women of Troy’s final regular season game, and is poised to claim the record for herself in the team’s Pac-12 Tournament opener against Arizona on Thursday.

If Harberts was the steady star for USC that teams knew they had to stop, Crook was the breakout performer who frequently showed offensive explosiveness to catch opposing defenses off-guard. The Torrance, Calif. native averaged 15.8 points and 2.3 assists per game, often utilizing her quickness to drive to the basket for easy lay-ups. In USC’s biggest win of the season, a 77-70 road upset over then-No. 19 Cal, Crook poured in 34 points, the most scored by a Woman of Troy since 2002.

Both Vaioletama, the only USC player to start all 30 games besides Harberts, and Barrett molded reputations as defensive stoppers this season. Vaioletama led the team in steals (1.9) and defensive rebounds (4.8) per game, while also doubling her offensive output from last season in becoming USC’s third-leading scorer (8.5 ppg).

Barrett, who received All-Defensive Team Honorable Mention for the second straight year, led the team in assists per game (2.8), was second in steals per game (1.4) and fourth in points (6.8 per game).

Jaco established herself as a solid contributer off the bench, averaging 3.8 points per game and nailing 36.1 percent of her three-point attempts while averaging 14.1 minutes.

The selections were culled from a vote of the league’s 12 women’s basketball head coaches.