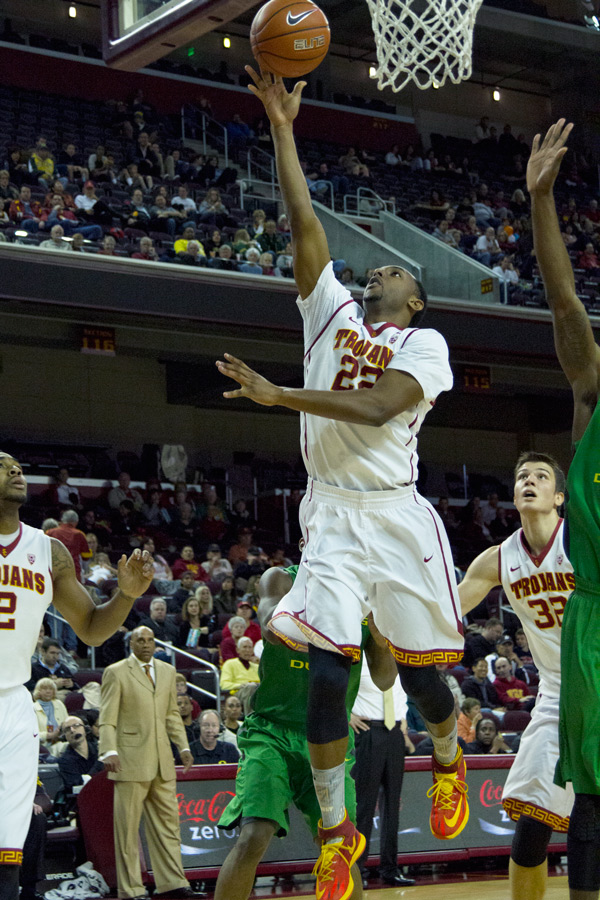 USC’s men’s basketball team is in Pullman, Wash. today, playing its second to last game of the season against the Washington State Cougars. Insufficient · Junior guard Byron Wesley averages 17.0 points per game but hasn’t been able to guide the Trojans to a victory in the past 10 contests. – Tucker McWhirter | Daily Trojan

The two cellar dwellers have yet to meet this season, but matched up twice last season. The first meeting resulted in a tense four-point USC win at the Galen Center. Later in the year, the Cougars recorded one of their four conference wins with a 76-51 thrashing of the Trojans at Washington State’s Beasley Coliseum.

USC’s offense looked anemic  in that contest, with then-junior guard J.T. Terrell being the only Trojan to get into double figures.  This year has been more of the same for first-year head coach Andy Enfield’s squad.

Luckily for USC (10-19, 1-15 Pac-12), the Trojans will be matched up with the only Pac-12 team that has been as bad this season. Washington State (9-19, 2-14 Pac-12) is coming into the matchup against the Trojans following a 23-point rout at the hands of its in-state rival Washington Huskies, and is in the midst of a seven-game losing streak.

This seems to be the last winnable game for Enfield’s team, with a game against Washington (16-13, 8-8) just around the corner to finish up the regular season. The Trojans have lost 10 games in a row — their worst streak since 2012.

Shockingly, USC has actually led in the second half of six of the last 10 contests, and has been within five points in the second half of the other four games. The Trojans have been coming out of the gates strong, but have  struggled near the end of games where the outcome is usually decided by half-court offensive execution and free throw shooting.

Acquiring an elusive second Pac-12 win will require that the Trojans stop Washington State’s dynamic guard DaVonte Lacy. The Tacoma, Wash. native  averages 19.6 points per game for the Cougars, and is the only player on his team averaging double figures. Forward D.J. Shelton leads the team with 9.3 rebounds per game.

Meanwhile, Washington is led by a trio of dangerous guards in Andrew Andrews, C.J. Wilcox and Nigel Williams-Goss. Wilcox is the team’s leading scorer at 18.2 points per game. Williams-Goss,  Washington’s leading assist man at 4.1 per game, has come on strong in the last few games — the freshman dropped 17 points in the squad’s win over Washington State last week.

Following this road trip against the Washington schools, the Trojans will prepare for the Pac-12 Tournament in Las Vegas next week. Presumably entering as the 12th (and last) seed, the Trojans will most likely be matched up with the highest-seeded team that does not have a first-day bye (the top four teams do not play until the second day).

Interestingly enough, this means that the Trojans could be matched up with either Cal or Stanford — both teams they have competed very well against this season.

Their only conference win, in fact, was a 77-69 triumph over the then-unbeaten in conference Cal Golden Bears.

USC took Stanford to overtime in the second game of that road trip, with just eight points separating the team from a Bay Area sweep. The close loss represented the beginning of the current 10-game slide for the Trojans.

Though the wins have been sparse, those inside the USC locker room genuinely believe that the Trojans have been improving steadily during Enfield’s tenure.

The fans certainly are not enjoying the mounting losses, but at least this year’s basketball team can be credited with playing hard game in and game out.

One of the major criticisms of Kevin O’Neill during his tenure as USC’s head coach was the overwhelming apathy that seemed to engulf the entire program. The Trojans this year have a pitiful record, but their coach believes they are playing hard.

“I’m proud of our players,” Enfield said. “They’ve had great attitudes and they’ve been very enthusiastic.”

Hopefully that enthusiasm will manifest itself into a pair of wins this week, just in time for a potential Pac-12 Tournament run.

Beer and baseball belong together
Scroll to top