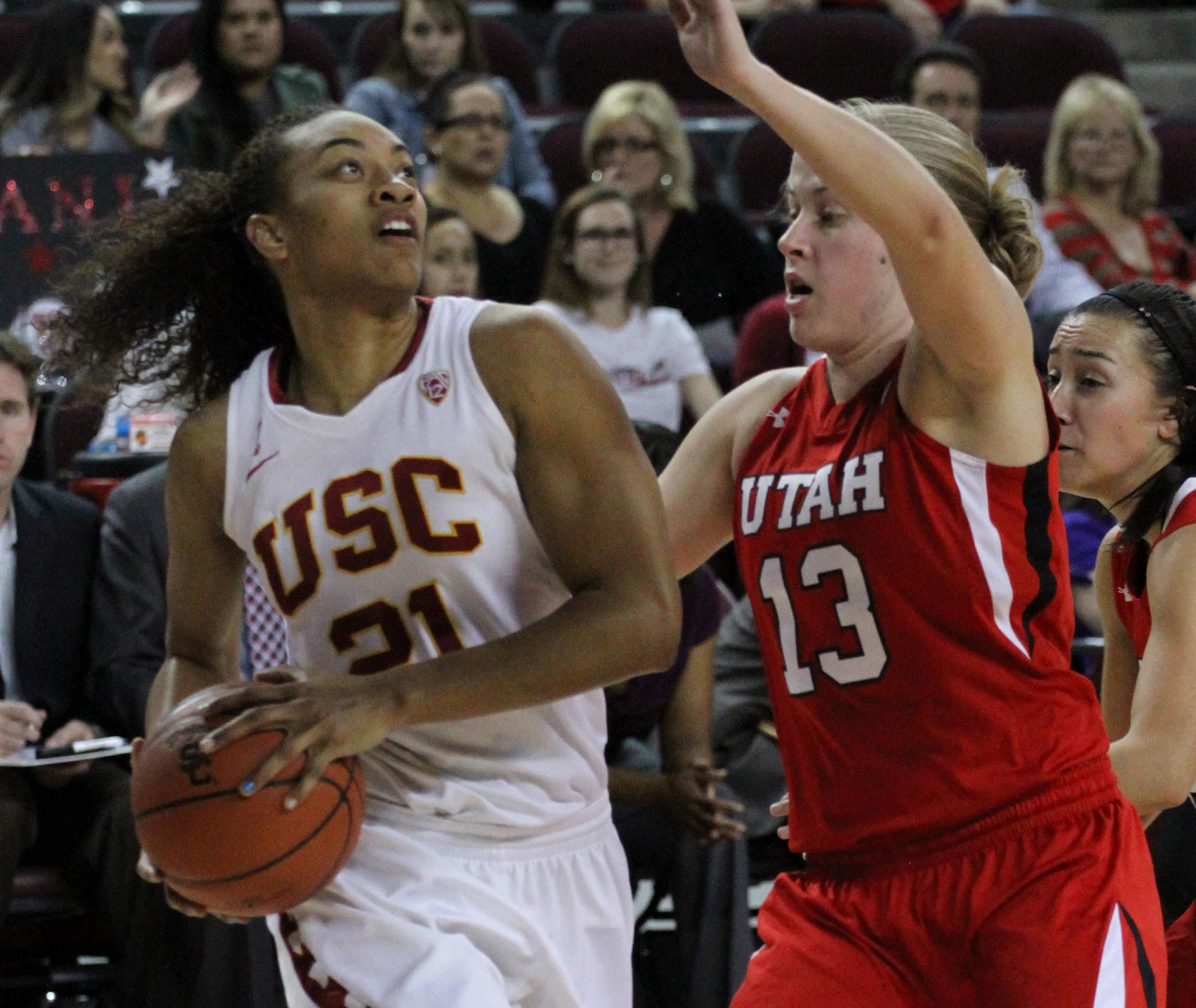 Following the lead of the USC football team, the No. 5-seeded Women of Troy pulled off the monumental upset of top-seeded and No. 4-ranked Stanford, prevailing 72-68 in the Pac-12 tournament semifinals on Saturday night in Seattle.

A win of such magnitude likely clinches a bid to the NCAA Tournament for the first time since 2006. Doing it all · Junior forward Alexyz Vaioletama led the Women of Troy with 19 points and 15 rebounds in Saturday’s victory over No. 4 Stanford. – Austin Vogel | Daily Trojan

“This team has proven their worth, we just beat Stanford,” head coach Cynthia Cooper-Dyke said. “I cant even remember the last time we beat Stanford and it feels great, but it really is a tribute to these players and how they have persevered and worked hard all season long.”

It does snap a 14-game losing skid to the Cardinal and puts USC in Sunday night’s championship game with No. 3-seeded Oregon State. A conference title would give the team an automatic berth to the NCAA tournament.

It will be the team’s second-ever appearance in the title game. Their last appearance came in 2009, when the No. 6-seeded Women of Troy were routed by top-seeded Stanford 89-64.

No matter how that game goes, though, this is a victory that will define Cooper-Dyke’s first season as head coach of the program and perhaps indicates USC’s ascendance back into prominence in women’s basketball.

The Women of Troy persevered throughout the game, especially down the stretch, trailing by three when senior forward Cassie Harberts put the team on her back and scored 10 straight points to give USC a 67-60 lead with 1:23 remaining.

“I’ve been working towards this for four years,” Harberts said. “I’ve never seen a team that’s given so much heart and never gave up. Even when they made a run, we knew we were going to come back and win the game.”

Playing like the experienced team they are, Stanford would not go away easily and the game would go down to the wire. A missed three-pointer at the buzzer by Pac-12 Player of the Year Chiney Ogwumike would seal the deal for the Women of Troy and give them the assurance that the Cardinal were not going to win their eighth consecutive Pac-12 championship.

Harberts was a force to be reckoned with in the game’s final minutes and finished the game with 13 points, but USC would be carried throughout the game by the one they call “X” — junior forward Alexyz Vaioletama.

Vaioletama would finish the game with a double-double, consisting of 19 points and 15 rebounds.

“We rebounded the ball when we needed to, executed offensively, we got Cassie started late in the second half and X [Vaioletama] played such a great game,” Cooper-Dyke said.

Junior guard Ariya Crook did her part when her team needed her as well, keeping the Women of Troy in the game in the first half by pouring in 13 points, breaking the 1,000 point barrier for her USC career along the way.

The two teams were leveled at 32 at halftime, but the Women of Troy would jump out to a 10-point lead midway through the second half. A large amount of trips to the free-throw line and the efforts of Ogwumike would disintegrate that USC advantage.

Ogwumike led the Cardinal with 30 points and 21 rebounds, tying the Pac-12’s all-time scoring record in the process.

The ability to play stout defense was an integral part in USC’s success. The Cardinal were held to a season-low 31.9 shooting percentage from the field.

The Women of Troy shot just under 40 percent from the field and an impressive 8-for-16 from the three-point line. Crook and Vaioletama were each responsible for three of those eight from long range.

“It’s just a testament to how hard this team has worked and this team deserves this,” Cooper-Dyke said.

Harberts agreed. “Seeing how much my team has grown over the course of the season,” she said. “We just relied on a lot of people and a lot of people stepped up tonight.”

Trojans miss out on March Madness
Scroll to top