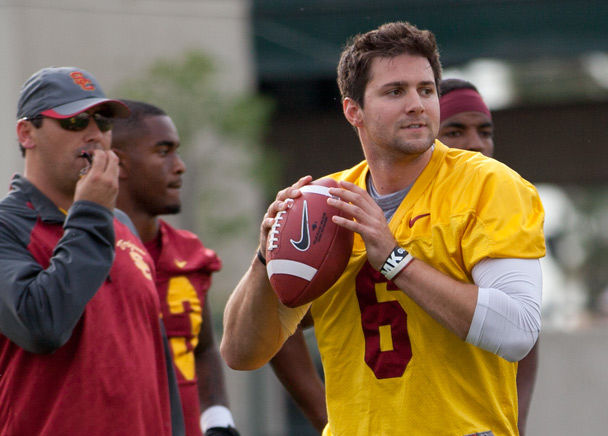 It’s almost spring, but spring football is  officially up and running for new head coach Steve Sarkisian and the USC football team, as they held their first practice on Tuesday at Howard Jones Field.

And as expected, the practice went a lot faster than it did under the team’s previous regimes. Of course, Sarkisian brings from Washington a high-tempo, no-huddle offense that is new to USC players. This style may have been foreign to the Trojans, but that was not reflected in the way they came out to play on Tuesday. The team brough out the intensity and focus that is desired by any coach.

“It didn’t really feel like a first practice,” Sarkisian said. “The guys came out with great energy today and our players were ready, in the right frame of mind to practice.”

“All in all, it was awesome coming through the gate and coaching these guys … I had a blast,” Sarkisian said.

If you were to ask any USC player if there was anything different about practice on Tuesday, they would say that Sarkisian did not waste any time.

According to redshirt junior quarterback Cody Kessler, the offense ran 125 plays in the hour and 45 minutes time allotment, a great deal more than in the Kiffin or Orgeron eras.  He described that this type of up tempo offense makes it easier for a quarterback in certain situations.

“Getting the plays now is easier, I’m not reading off my wristband and there is a lot more time on the play clock when I snap the ball,” Kessler said.

A big question coming into spring ball, for the second consecutive year, is who will win the USC starting quarterback job once the spring is over: Kessler or redshirt freshman Max Browne. Kessler is the incumbent, but Sarkisian, having recruited Browne from Skyline High School in Washington knows what he can do with his arm. Look to this position battle for Sark’s first real important decision.

“I’m just trying to get better every practice,” Kessler said.

For now, Sarkisian is just focused on making sure that his team plays up to the quick tempo that he has installed.

He shared a motto: “If you’re walking, then you’re doing it wrong.” He continuously praised veteran linebacker Hayes Pullard for leading by example and being the first guy to every drill.

Even Sark was all over the field, engaging with his players, clapping and giving them encouragement, and getting on the field to spot the ball to speed up the pace of play.

“It was a lot of plays,” offensive lineman Max Tuerk said.

Changes on the Line

Returning junior Tuerk slid down from his left tackle to make the start at center in the spring’s first practice, a position that needed to be filled with the departure of last year’s starter, Marcus Martin.

Tuerk returns with the most starts of any offensive lineman with 20 career starts and is considered the Trojan’s most versatile lineman.

According to Tuerk, offensive line coach Tim Drevno notified him of the position change about a month ago.

Tuerk had previously given the center position a shot last spring before Martin assumed the position’s roles. Things have changed since then though, he asserted.

“I have a lot more confidence now and we are picking up the offense,” Tuerk said.

Questions still remain on the offensive line, however, as someone is still needed to replace Kevin Graf at right tackle.

“We had to move guys around … Max Tuerk is playing center and has taken a leadership role,” Kessler said about the offensive line in an interview with ESPN.

Five-star USC signee Adoree’ Jackson was at practice today, but it remains unknown where the coaching staff will utilize him in the fall. Top 2015 quarterback and verbal commit Ricky Town was also in attendance.

Sarkisian confirmed that defensive end Leonard Williams had his shoulder cleaned up following the bowl game and will be limited in practice. Josh Shaw has a stress fracture in his foot, was in a walking boot and will also be limited.

Justin Davis, who suffered a season-ending ankle injury during an impressive freshman campaign, only participated in walk-throughs, along with a few other injured players.

Wide receivers George Farmer, a redshirt junior and Steven Mitchell, a redshirt freshman, were back in action on Tuesday. Farmer was patient when discussing his injury.

Farmer claimed his knee was currently at 85 percent.

With a new style of play, injuries, and the constant pressure to win surrounding the program, it appears that Sarkisian has a lot of questions left to answer this spring.