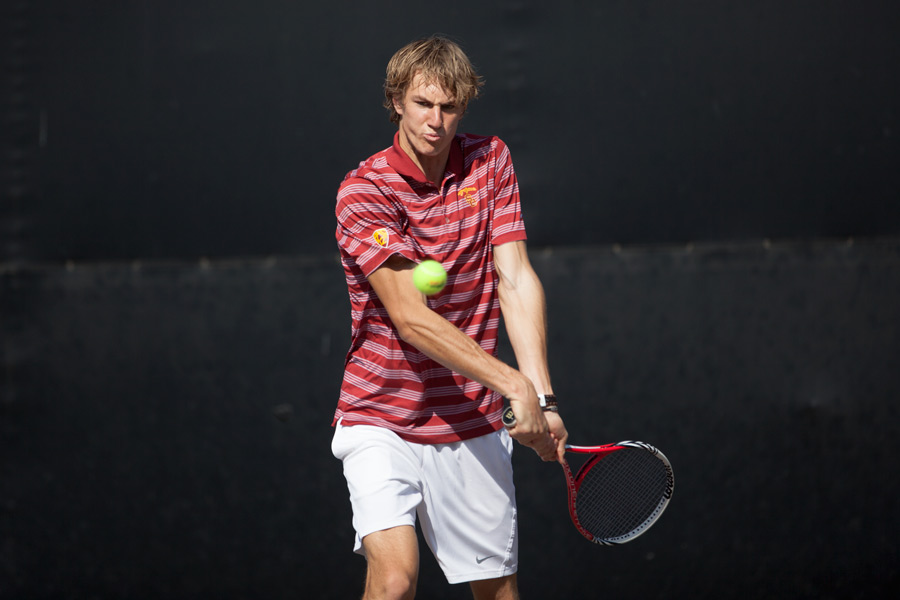 The cloudy gloom over Marks Stadium couldn’t cast a shadow over the USC men’s tennis team’s fiery playing style in yesterday’s matchup against No. 75 San Diego State. The newly minted No. 1 Trojans dominated with a 7-0 sweep — their ninth straight victory. Sophomore Max de Vroome and junior Eric Johnson scored a quick 8-2 win over the Aztecs’ Andranik Khachatryan and Hunter Nicholas, setting the tone in doubles action. Though the win was expected, what wasn’t expected was head coach Peter Smith’s unconventional coaching style going into this matchup.

“I wanted to make it as tough on us as possible,” Smith said, referring to his unconventional lineup. “I wanted to play as many guys as I could, and make it tough.”

Smith’s team was up for the task, and handled themselves well. Freshman Nick Crystal played with previous Pac-12 player of the week Roberto Quiroz, who beat out their teammates on court three and secured an 8-5 win over Freddy Gelbrich and Hendrik Jebens.

“Nick [Crystal] played great,” Smith said. “I think that would be our third team.”

Smith’s unexpected lineup achieved exactly what he wanted: a chance for underutilized players to win.

In singles, freshman Rob Bellamy drummed up a quick 6-1, 6-1 win over Khachatryan for a lift to a 2-0 lead for USC — and for the freshman’s seventh straight victory. Next, Michael Grant took down SDSU’s Milen Ianakiev in a 6-0, 6-2 to make it 3-0. Sealing the Trojans’ team win was No. 56 junior Roberto Quiroz. Quiroz claimed his eighth victory in a row over Thorsten Bertsch in a 4-0 lead.

Next in line with a straight-set win for USC was Eric Johnson, whose 6-1, 7-5 win over Freddy Gelbrich at court three extended his lead to 5-0. At the No. 5 spot, Jonny Wang rang up a 6-2, 6-3 win, coming back in his second set to beat Juan Florez and boost USC to the 6-0 advantage.

“I fought my heart out, tried my hardest, and stayed positive,” Wang said.

USC achieved straight-set wins in every singles match but one — No. 2. Despite a slow start, Max de Vroome clinched a win in the second set by pummeling his opponent Nicholas in a tiebreaker. De Vroome finished his match and the game with an action-packed 6-4, 5-7, 1-0 (10-2) win.

Though the Trojans are no strangers to being No. 1, this marks the first time the Trojans have held the position since the close of the 2012 season, when USC finished off its fourth consecutive national championship run.

Coach Smith credited his team’s success to its competitive nature.

USC’s coming road trip will take the Trojans to the Pacific Northwest. The Trojans battle  Oregon in a 1:30 match on Friday before traveling to Washington at 1 p.m. on Saturday.