Trojans head north to take on No. 6 Stanford, Pacific 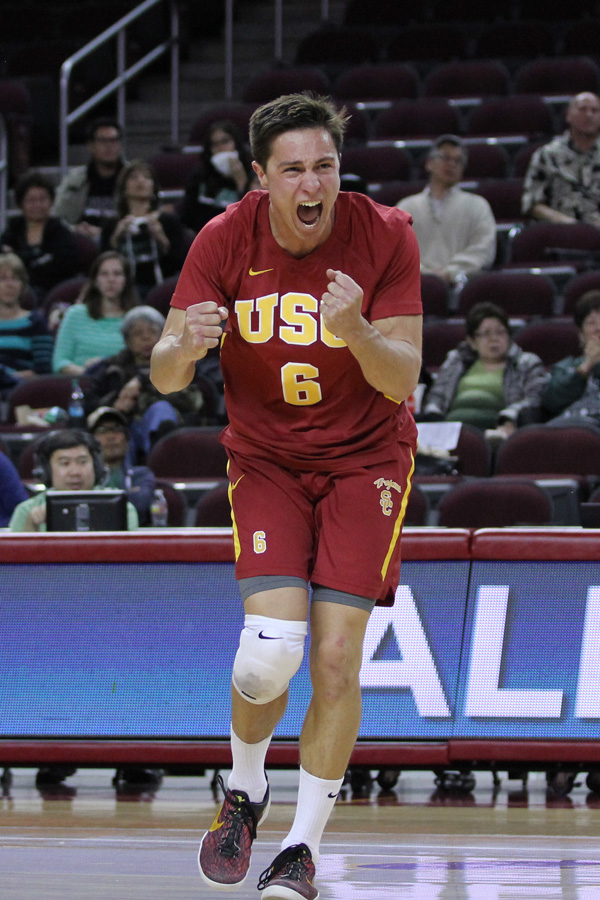 With just two weeks remaining in the regular season, the USC men’s volleyball team seems to have finally come into its own. After three big conference wins over spring break, the Trojans will head north this weekend to take on Stanford and Pacific for two more crucial Mountain Pacific Sports Federation matchups. Digging deep · Senior outside hitter Henry Cassiday ranks second in the nation and first in the MPSF conference with 3.15 digs per set. – Nick Entin | Daily Trojan

“It feels good,” said USC head coach Bill Ferguson. “We’re definitely playing our best volleyball right now, and you always want to be peaking at the end of the year, and we’re starting to do that.”

“We’re playing better every single game,” McKibbin said. “Our passing has gotten better, our hitting percentage is going up, we’re blocking a lot more balls, we’re getting a lot more aces. It feels like we’re steadily reaching our peak, which is what we planned to do.”

“I love playing in North Gym,” said senior libero Henry Cassiday. “I don’t think I’ve ever lost here. It’s a gnarly home court advantage with the low ceiling, and we practiced with that a little before. We have our fans here and they’re really close, they’re right next to the action, so it’s really fun.”

The three-game winning streak featured the same starting lineup for the Trojans each match. Along with McKibbin and Yoder starting at the two outside hitter spots and with Jansen starting at opposite, the USC starting lineup has featured freshman Andy Benesh at the first middle blocker spot, junior Chris Lischke at the second middle blocker spot, Cassiday starting at libero and junior Micah Christenson as the starting setter. With relatively few exceptions, Cassiday, Christenson, Yoder and Benesh have started every game for the Trojans this year, though the team has used more of a committee for the second outside hitter spot, second middle blocker spot and the opposite. Cassiday, however, said that the group of seven starters from the last three games has developed a lot of chemistry together and look to be the starters for the rest of the season.

The Trojans are ranked as the No. 7 team in the country, according to the most recent American Volleyball Coaches Association poll, with Stanford coming in at No. 6 and Pacific unranked. The Trojans are currently in fifth place out of 13 teams in the MPSF, 4.5 games behind BYU, who leads the conference at 16-2.

Both matches this week are set to start at 7 p.m. If USC can win both, the team will have won five straight matches for the first time this season.

No. 1 USC pulls off comeback victory

Questions abound after ruling on union
Scroll to top