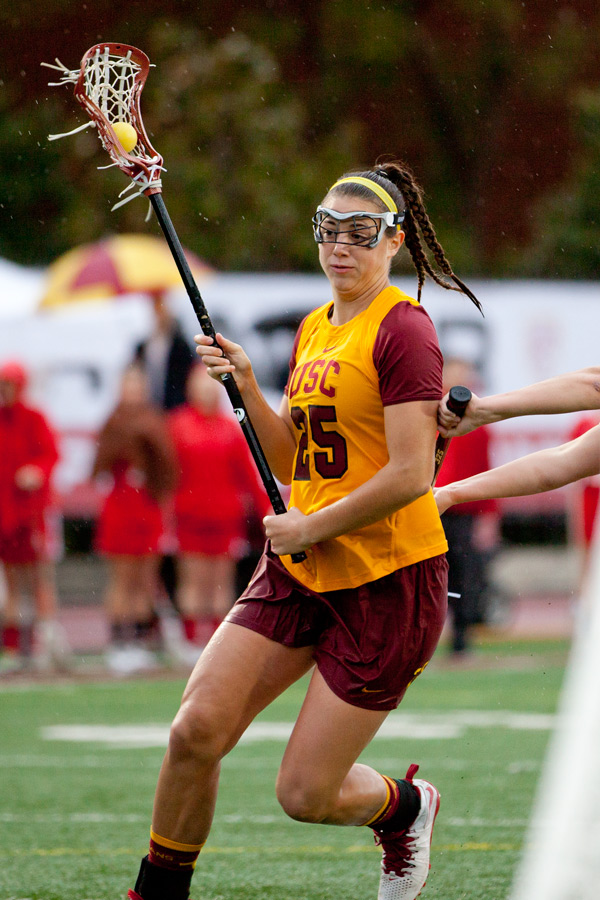 USC’s women’s lacrosse team remains undefeated in early Mountain Pacific Sports Federation play after beating San Diego State Wednesday, 13-9. USC improved to 4-4 overall on the year as well as 2-0 in the MPSF. After suffering a loss at Massachusetts (9-1) last Saturday, USC got back to .500 with the win over the Aztecs. USC more than doubled SDSU’s efforts in shots, putting 29 on target compared to the Aztecs’ 14. That forced SDSU’s goalie to make 13 saves, while USC sophomore goalie Liz Shaeffer only made two.

After eight scoreless minutes to open the game, SDSU got on the board first, but within 30 seconds USC senior midfielder Elizabeth Eddy scored for the Women of Troy. The teams traded goals until the score was locked at 3-3. The Women of Troy then surged ahead, scoring three straight goals to head into halftime with a 6-3 lead.

De Lyra’s offensive prowess was matched by SDSU’s Michaela Jarvis, who also put up four goals and an assist.

USC currently sits in a three-way tie with Denver and Stanford for the best record in MPSF play. Both USC’s preseason projection and current standings in conference play indicate that USC will make the MPSF tournament but need big upset wins to dethrone the top two teams in the conference. The Women of Troy also would not receive a bye in the quarterfinals of the MPSF tournament if they finished third in the conference standings.

Questions abound after ruling on union