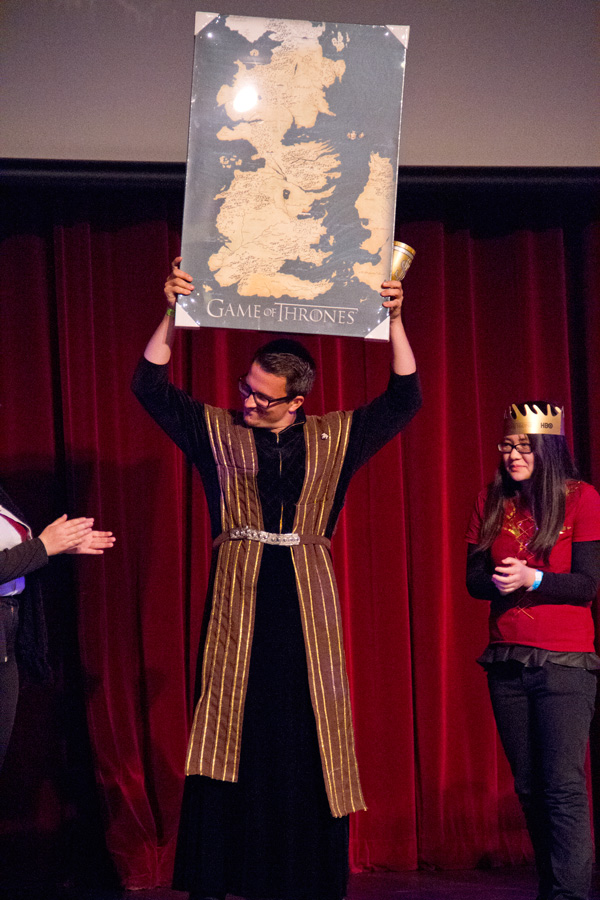 The USC Special Events Committee hosted a pre-screening of HBO’s Game of Thrones Season 4 for an audience of more than 800 in Bovard Auditorium Wednesday evening.

Game of Thrones, the television adaption of the A Song of Ice and Fire series by George R. R. Martin, premiered in April 2011 to critical acclaim, garnering a numerous awards and nominations as well as a loyal fan base. The show is now on its fourth season, which will premiere on April 6. Austin Kolodney, a senior majoring in film production, won a map of Westeros in a costume contest for before the screening. Kolodney dressed as ‘Game of Thrones’ character Petyr Baelish. – Austin Vogel | Daily Trojan

The evening was a collaboration between the Special Events Committee and HBOCollege.

“We had worked with HBO last semester with The Newsroom, and then they brought up the idea of potentially doing a Game of Thrones pre-screening this semester,” said Kim Chu, director of USC Special Events Committee. “So we got on board with that immediately after The Newsroom [screening].”

A Facebook event drew more than 1900 people, but because only the orchestra and one balcony were made available, only 850 people would be allowed access into the screening, said Chu.

“The challenge [was] that there were too many people and that we [had] to turn down some people at the end. I mean, enthusiasm [for the event was] off the charts, within the first 30 minutes of me making the event public there were 850 people.”

Chu, a Game of Thrones fan herself, was thrilled to provide students an exciting event.

“I’m hoping to just enhance the USC experience for all of our students,” Chu said.

Many students began lining up Wednesday at noon for a guaranteed chance to attend the event.

“[I waited in line] for about six hours,” said Michael Malconian, a junior majoring in theatre. “I’m looking forward to see where all the plots happen and see the characters and spend time with some friends.”

Malconian also said he enjoyed the show due to its medieval fantasy setting and theme.

“I definitely like the mythos aspect of it, the lore, it’s very self-contained and I like that,” Malconian said.

Several students attended the event not only for the screening, but the overall experience of watching the show with other avid fans.

“The thing that appealed to me [about the event] was that I’m sitting in Bovard Auditorium with like 800 other people, and they’re all really hyped up about Game of Thrones,” said Benedict Chiu, a freshman majoring in business cinematic arts. “And it’s like we’re watching the preview and it’s just something I’m never going to get the chance of participating in again.”

The USC Special Events Committee will also be attempting to break the Guinness World Record for “Most Sandwiches Made in One Hour,” this Friday afternoon in partnership with Zeta Phi Rho to benefit their Zeta Phi “Skid” Rho philanthropy.

Fantasy baseball draft: Rounding out the team
Scroll to top