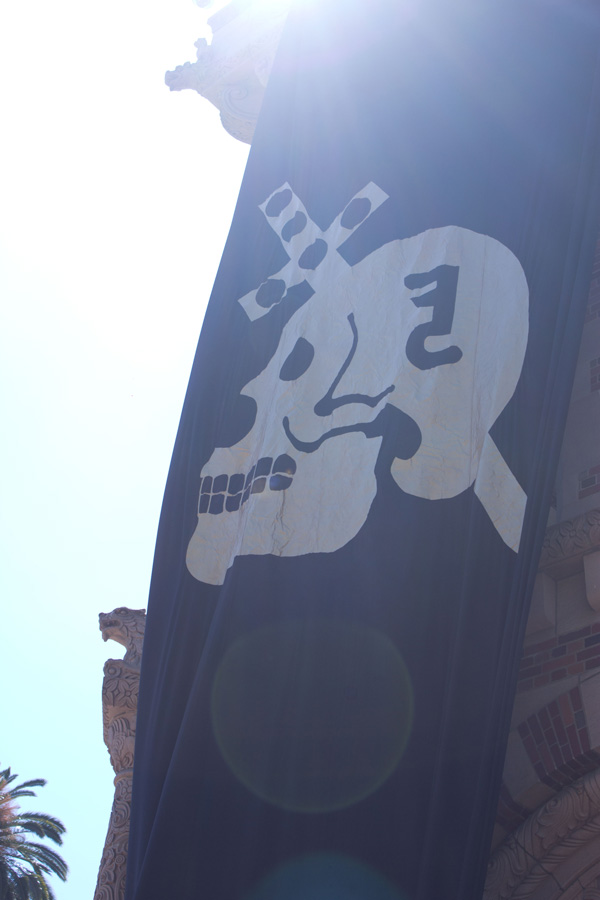 Dozens of students lined up in front of the Gwynn Wilson Student Union building Thursday morning in response to a mass email from the USC Ticket Office announcing major changes to the 2014 football season ticket rules. At noon however, the email was revealed to be an elaborate prank staged by Skull and Dagger Honor Society. Punk’d · Members of the Skull and Dagger honor society unfolded their banner from the top of the Student Union after successfully executing their annual prank on Thursday afternoon in Hahn Plaza. – Joseph Chen | Daily Trojan

Students received an email on Wednesday evening stating that season ticket holders were now required to obtain reserved seats. The email further stated that only the first 3,000 students waiting in line on Thursday starting at 9:00 a.m. would be guaranteed a ticket.

“I thought the email was an April Fool’s joke, but I was walking by and I didn’t have anything else to do, so I figured I’d just wait in line,” said Jaffar Agha, a junior majoring in economics, while waiting in line. “I still don’t know if I really believe it. Maybe it’s true, or maybe when we get to the front they’ll give us a T-shirt.”

At noon, when students believed they would be receiving their assigned seats, Skull and Dagger members appeared in costumes in front of Tommy Trojan and fake ticket stubs were handed out. Some members unveiled a Skull and Dagger banner from the top of the Student Union and free pizza was given to the students who waited in line.

“I’m a freshman, so at first I thought it was real,” said Eliana Velasco, a freshman majoring in broadcast and digital journalism. “I figured maybe this was a normal thing. Now that we know it’s a prank, I’m laughing it off because I’m one of the ones who fell for it. Luckily not a lot of people showed up.”

The turnout of about 30 students was small compared to last year’s prank, which involved football star Marqise Lee and drew the attention of about 400 people and local news teams. This year’s email, however, stirred up controversy online.

“The Facebook groups were total chaos last night,” said Celina Caovan, a sophomore majoring in human biology. “A lot of us were really mad, because we had bought our tickets and were looking forward to the games, but we couldn’t wait in line because we had class. We freaked out for a while, but then we figured out that it had to be a joke.”

Some, however, predicted the news was a prank. Nathaniel Haas, a sophomore majoring in political science and economics and a Daily Trojan staff writer, wrote an article published on Neon Tommy Wednesday evening that questioned the email’s legitimacy.

“Look close at the email, and you’ll notice the sender:  uscto@usc.edu,” Haas wrote. “Sounds legit enough (to = ticket office). But if you’ve been harassed by the real ticket office for the last few months like me, you’ll notice that’s not actually their email address.”

Skull and Dagger’s annual prank is an initiation ritual for new members of the university honor society, which celebrated its 100th anniversary last April. Past pranks have included false announcements and fake raffles for Coachella and football tickets.

“As a new student here, I hadn’t heard of Skull and Dagger until last night,” Caovan said. “The whole thing was pretty stressful, but it was fun and creative. They really had us going.”

Shakespeare in song
Scroll to top