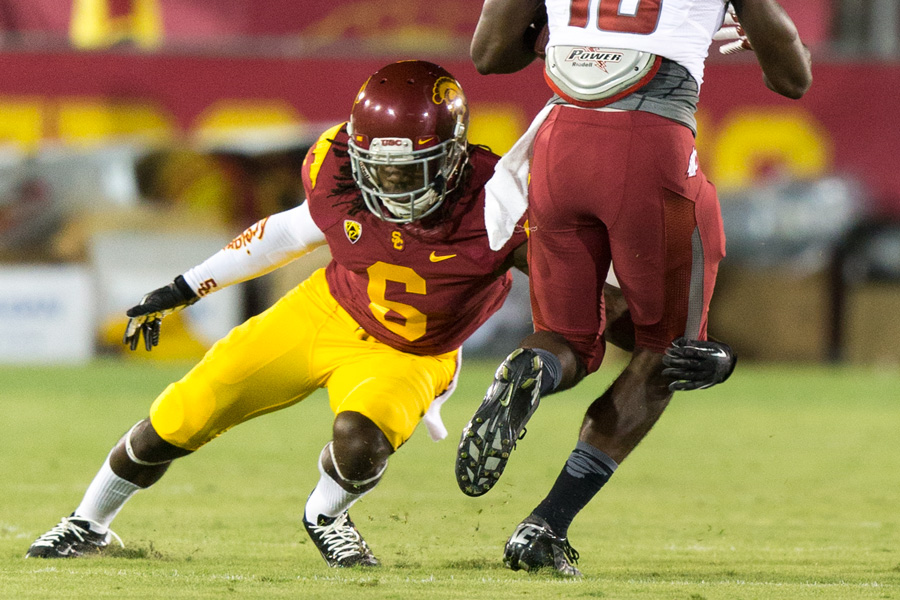 After a lackluster practice on Tuesday, the USC football team rebounded nicely for a strong session on Thursday. USC head coach Steve Sarkisian was again impressed by his players’ ability to respond to the coaching staff’s criticism. Valuable asset · USC redshirt senior defensive back Josh Shaw has sat out of most of the spring with injury. Shaw, a transfer from Florida, has recorded 119 tackles and 6 interceptions in his time at both schools. – Ralf Cheung | Daily Trojan

“We looked at the film from Tuesday, which I thought [showed that] we were a little bit sloppy and a little bit slow, and we came back today and finished practice eight to nine minutes faster than Tuesday, and the tempo was where we wanted it,” Sarkisian said. “There were less unforced errors. You’re gonna have some days where you don’t do it exactly how you want to. The important thing, though, is, ‘Are we gonna respond?’ And I thought our guys really responded today.”

Thursday’s practice was the eighth of 15 for the team, marking the midpoint of spring practice. Sarkisian was pleased with the progress his players have made in the past few weeks.

“We feel very good about where we’re at,” Sarkisian said. “Some of the mistakes that we were making early, we’re not making those same mistakes now. We’re not perfect by any means, but we’re getting an idea of who we are as a team and where our strengths are, and we’re trying to play to those strengths on both sides of the ball.”

Sophomore safety Su’a Cravens, who started 13 games last season and finished tied for second on the team with four interceptions, missed practice for the second time this week while dealing with a knee injury. He joined redshirt senior defensive back Josh Shaw and redshirt sophomore cornerback Devian Shelton on the list of injured defensive backs.

These injuries have provided many opportunities for younger, inexperienced players to get more playing time. Freshman cornerback Chris Hawkins was able to take most of his reps with the first unit.

“It’s all new for him,” said defensive backs coach Keith Heyward. “We’re new coaches, with a new scheme, new techniques and new things they’ve got to learn. [Hawkins] hasn’t played [in games yet], so he has to get used to the speed of the game. But he’s doing a good job.”

“Coach Heyward is a great coach. He takes the time out to really teach you,” Hawkins said. “He goes from corner to free safety to strong safety and to the other corner. He doesn’t skip over anybody.”

Yet with no game experience under his belt, Hawkins, who just turned 19 in March, has leaned on veterans such as Shaw and junior cornerback Kevon Seymour to help guide him as he adjusts to his new role on defense.

“Kevon and Josh both help me a lot,” Hawkins said. “I’m the young one in the group, so they help me a lot. Knowing that they’ve been in the game and knowing what receivers are trying to do to them, they help me physically and mentally.”

Sarkisian said that he hopes to get as many players back during spring as he can, but his ultimate goal is to have everyone healthy by the time fall camp begins.

“When we go to training camp, I want a 100 percent healthy football team, and I don’t want to risk that in spring,” Sarkisian said. “With that being said, we’re fighting like crazy to get these guys back on the field because we’re a better team the more guys we have out there.”

Midway through practice, Sarkisian called the team together for a competition period, a normal part of practice that pits a handful of offensive and defensive players against each other in what is normally a strength or speed drill.

This time, however, the “competition” was a dance-off, as players showed off their moves while the speakers blared hip-hop music.

“We have a competition period where we do a lot of one-on-ones,” Sarkisian said. “I just felt that the time was right to shake that period up a little bit. It was a good competition. Some guys have some moves, and some guys don’t.”

Rogers and redshirt sophomore linebacker Scott Starr were singled out as the best dancers on the team.

USC’s next practice will be on Saturday at Howard Jones Field. After practice, the players will participate in the Swim With Mike charity event, which helps physically challenged athletes.

“It’s a great event, and it’s an opportunity for players to understand their role here,” Sarkisian said. “They’re not just guys who put on helmets and shoulder pads. They’re student-athletes that do a service to the university. It’s their opportunity to give back, and they’ll do a good job.”