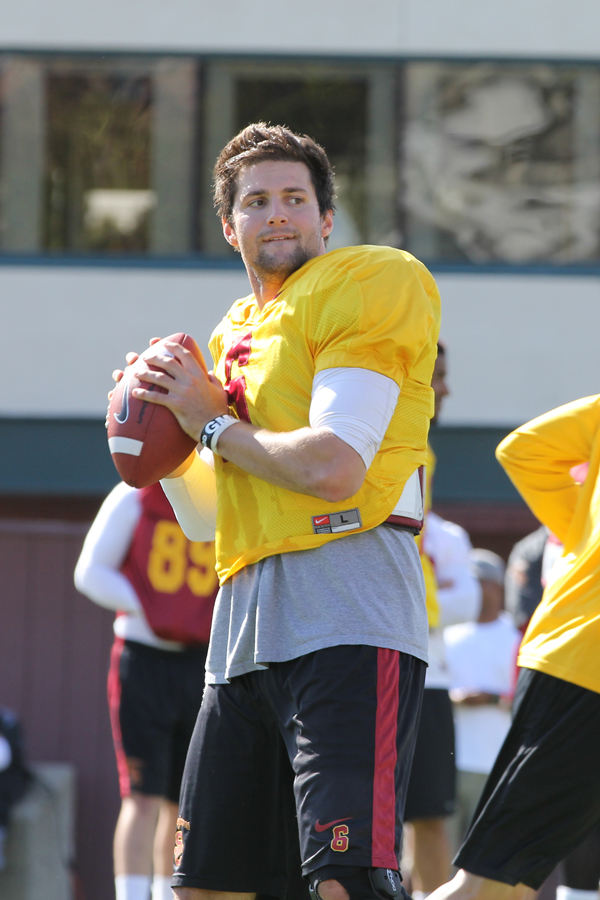 After USC’s football practice on Tuesday, head coach Steve Sarkisian said he “would suspect” he’d name a presumptive starting quarterback by the end of spring. Wow! What news! What a dramatic impact this will have on the season. Stop the presses, everyone.

Of course, I jest a little bit. This is not a completely insignificant statement, especially after Lane Kiffin dragged last year’s quarterback battle two full games into the season.

But let’s be honest, it’s not that significant either.

There are still close to five months before USC’s season kicks off against Fresno State on Aug. 30. There are still four spring practices and the entirety of fall camp. When Sark “officially” announces redshirt junior Cody Kessler (presumably) as his starting quarterback in the near future, there will still be plenty of time for the head coach to reconsider, or for Kessler’s competitor, redshirt freshman Max Browne, to make him do so.

And for anyone who has seen much of spring ball, this is a non-event. There is one quarterback that has outplayed the other, and generally speaking, that makes him the starter. That was part of what made last season’s ordeal between Kessler and his classmate Max Wittek (who has since announced that he will transfer) so frustrating. To many observers of fall camp, Kessler was the obvious choice. Wittek may have had superior physical tools, but ultimately, those don’t matter if you don’t have the mental ones.

This spring is a similar situation. Browne, like Wittek, is more physically gifted than Kessler. He looks like a quarterback. In an “ideal” world, he would have emerged as the starter. But you can’t just look the part, you have to play it too. And just like in his competition with Wittek, Kessler’s command of the offense and grasp of the playbook is obviously better than Browne’s.

So there’s no reason to overreact, or react much at all, to Sarkisian’s statement. First and foremost, he will simply be stating the obvious — for the time being. Cody Kessler, right now, gives USC the best chance to win.

But as previously mentioned, USC isn’t playing games right now. Nor will they next week, or next month, for that matter. An awful lot can change between “right now” and Aug. 30. Max Browne will have the entire summer to further his understanding of Steve Sarkisian’s new playbook (then again, so will Kessler, and there is no substitute for actual reps, during a game or in practice). Sarkisian made it clear that his choice is not set in stone. Rather, he will “watch for a little bit … and see what it feels like” after he names the starter.

For now, however, quarterback speculation is just that: speculation. It means nothing, or at least next to nothing. Cody Kessler will probably enter fall camp on top of the depth chart, where he spent (almost) the entirety of last season. He’ll take reps with the first-team — good for him. Max Browne will enter as the No. 2 guy. But those positions aren’t locked. If Browne outperforms Kessler in the fall, it won’t matter who did what in the spring.

The best player will play. That is what Steve Sarkisian is doing now, and that is what I imagine he will do come fall.

Nick Burton is a senior majoring in broadcast and digital journalism. His column, “Any Given Saturday,” runs Thursdays, ironically. To comment on this story, visit dailytrojan.com or email Nick at burtonn@usc.edu.