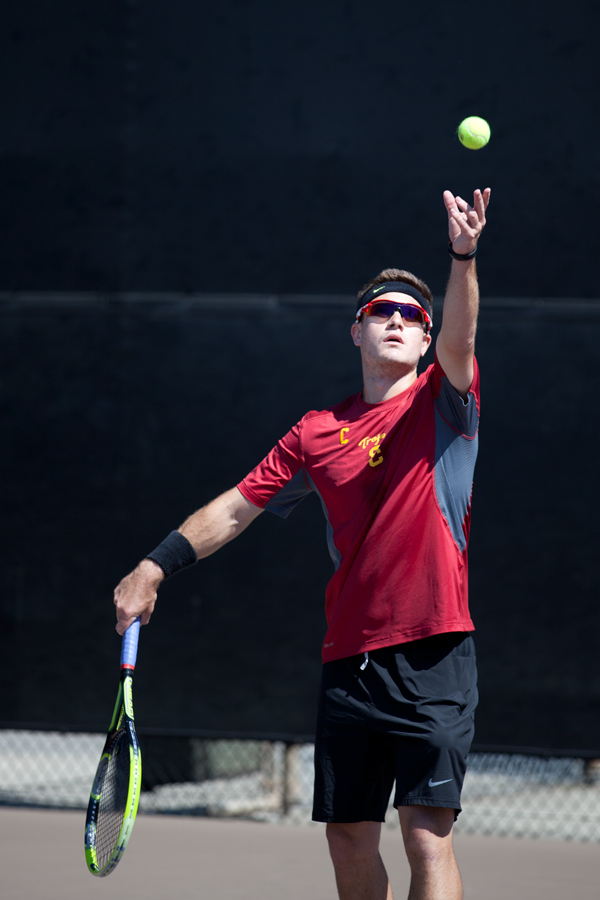 USC’s second-ranked men’s tennis team looks to continue its success this weekend on a two-game road trip. On Friday, the Trojans take on the unranked Arizona Wildcats in Tucson, and on Saturday they head to Salt Lake City to take on the No. 51 Utah Utes. The Trojans (22-2, 4-0 Pac-12) are riding high off of their sweeps of Stanford and California last week. USC went 7-0 against Stanford and 4-0 against Cal, perfectly propelling them into another round of Pac-12 action.

“Cal and Stanford have always been big rivals [of ours],” senior co-captain Michael Grant said. “It’s nice to beat them the way we did.”

Junior Jonny Wang said the wins were a “crucial part of  Pac-12 play” and that the intensity the team brought to the last two games is something they’re hoping to maintain.

Wang and Grant are just two of USC’s six singles players ranked in the Intercollegiate Tennis Association’s top 125. Senior co-captain Ray Sarmiento leads the way at No. 7, down slightly from the No. 3 ranking he held for a few weeks before losing two straight singles matches at Oregon and Washington. Next is junior Yannick Hanfmann, who sits at No. 17 in the nation. Wang is ranked No. 46, and junior Roberto Quiroz is ranked No. 53. Sophomore Max de Vroome has fought his way back into the national rankings and is slotted at No. 94. Grant rounds out the group with a No. 107 ranking.

Sarmiento and Hanfmann have climbed up to the No. 4 spot in doubles together, and Grant and freshman Nick Crystal make up the 57th-ranked duo in the country.

The Trojans are heading into the homestretch of the season, and Wang says USC’s coaching staff has been key in keeping the Trojans motivated to make sure they don’t burn out.

“[The] coaches have really kept us on track,” Wang said. “They push us every day and keep us really focused, not just on the result. We’ve really focused on the process, more so than the goal.”

USC is currently riding an impressive 13-match win streak dating back to the end of February. Quiroz has prevailed in singles play in each of these 13 matches, bringing his dual-match record to 17-1 on the season. Quiroz and freshman Nick Crystal have also won five straight doubles matches together.

USC head coach Peter Smith doesn’t want his team getting complacent heading into this kind of matchup, so he has tried to keep things interesting in practice, and the players are responding positively.

“We’ve been working out a lot more — morning workouts, workouts on the beach, or where the girls volleyball team [plays],” de Vroome said. “It’s just getting [us] stronger, more ready for the next games.”

Make no mistake, though: This beach approach isn’t meant to loosen up the team, but to strengthen the players and to serve as a team bonding experience.

“The sand is super soft on us,” Grant said. “So it’s pushing us really hard and working really well.”

This unconventional training has also prepared the team to take on Utah (14-5, 2-2), a team that has won two straight matches. Last weekend, the Utes traveled to Oregon and Washington and netted two 4-2 victories, despite having no ranked singles or doubles players.

The Trojans insist that they don’t pay attention to their opponents’ records, though, and focus instead on their own individual and team game.

“I’ve been working on my footwork and getting closer to the net,” de Vroome said. “[I feel] very confident about what’s coming next, so I’m looking forward to it.”

The Trojans kick off their weekend trip on Friday at Arizona at 1:30 p.m., before traveling to Utah to take on the Utes Sunday at 1 p.m. MST.