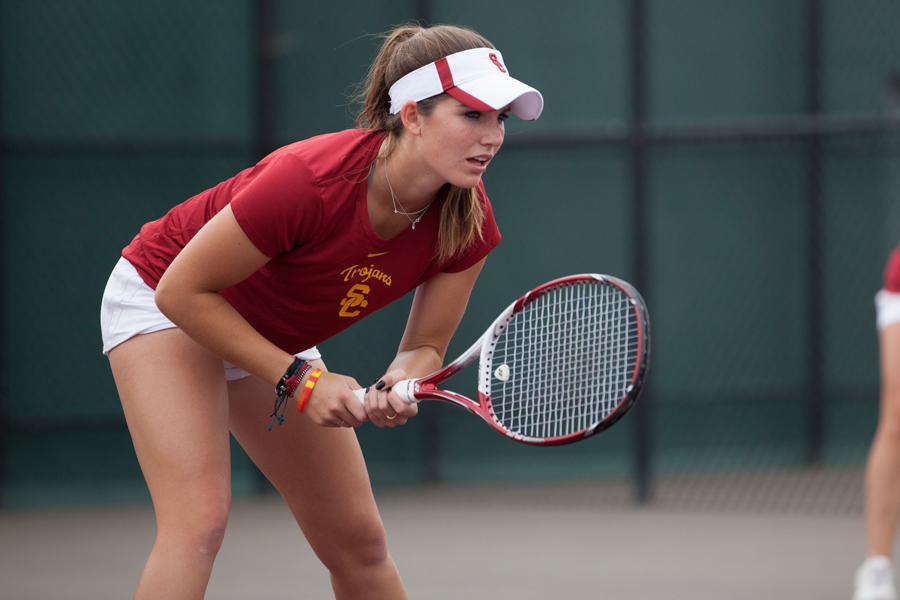 USC’s 13th-ranked women’s tennis team will have an opportunity to redeem itself  this weekend after suffering back-to-back losses at No. 12 Cal and No. 4 Stanford. Break the chain · Freshman Zoë Katz has lost her last four singles matches, but hopes to get back to her winning ways this weekend. The Los Angeles native is currently ranked No. 101 in the nation. – Ralf Cheung | Daily Trojan

With the losses, the Women of Troy fell into a fourth-place tie in the conference standings, two matches behind Cal and a match behind No. 2 UCLA and Stanford.

USC is now gearing up for its last home stand of the season, as No. 19 Arizona State comes to town on Friday and No. 25 Arizona visits USC on Saturday. All three teams are tied with a 5-2 mark in conference play.

The 19th-ranked Sun Devils are coming off of a 4-0 win over Colorado and a 4-2 win over Utah last weekend. Arizona State boasts two nationally-ranked singles players in No. 49 Desirae Krawczyk and No. 68 Stephanie Vlad. In addition, Krawczyk and Kassidy Jump comprise the 85th-ranked doubles team in the nation.

Arizona will also come to Los Angeles having recently topped Utah, 7-0, and Colorado, 5-2. Much like their rival Sun Devils, the Wildcats have two players ranked in singles: No. 60 Lacey Smith and No. 61 Lauren Marker. Arizona has no ranked doubles teams.

Meanwhile, USC boasts four ranked players in singles. Junior Sabrina Santamaria is ranked No. 17 in the nation, but she sustained an ACL injury in March that sidelined her for the remainder of the season.

Junior Zoë Scandalis, who has taken over Santamaria’s spot on USC’s top singles court, is next at No. 26. Junior Giuliana Olmos is ranked 76th in the nation, and freshman Zoë Katz rounds out the group at No. 101.

Ranked doubles teams for the Women of Troy include the tandem of Olmos and Scandalis, who land at No. 6. The team of Katz and senior Brynn Boren, meanwhile, currently sits at No. 13. Santamaria and senior Kaitlyn Christian, the defending national champions in doubles, come in at No. 25.

If history repeats itself, USC’s chances of dispatching the Arizona schools and climbing back into the Pac-12 contender race are solid. Last year, the Women of Troy took home two resounding wins on a road trip to the Grand Canyon State defeating the Sun Devils 7-0 and the Wildcats 6-1. USC was led in those matches by Olmos and Santamaria, who each captured two straight set wins in singles. Still, given the loss of Santamaria to injury and the team’s poor play last weekend, this year’s matches should be more competitive.

Interestingly, another good omen for the Women of Troy could be their current two-game losing streak. The two previous times this season that the team lost back-to-back matches, it went on to rattle off five straight wins.

USC’s next two games mark its second-to-last weekend of Pac-12 play. On April 18, the team travels to face UCLA, looking for revenge after having fallen to the Bruins twice this season already (once in the ITA National Team Indoor Tournament by a 4-0 score and again last month, 5-2). A week later, both teams will travel to the Pac-12 championships in Ojai, Calif.