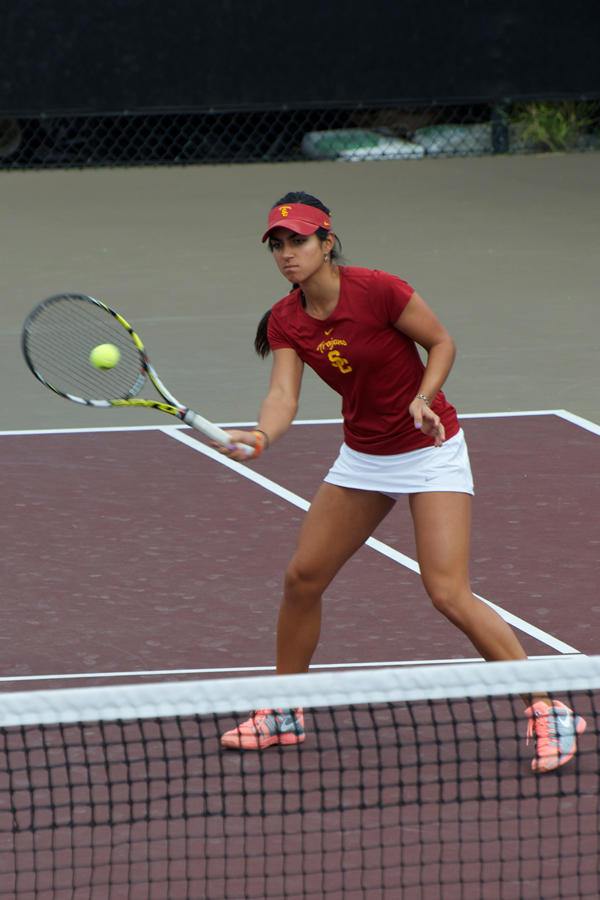 USC’s women’s tennis team picked up two crucial wins this weekend to move into sole possession of fourth place in the Pac-12 conference heading into the end of the regular season. USC came into the weekend trying to get back on track after suffering back-to-back losses at the hands of California and Stanford. Head coach Richard Gallien was impressed with his team’s ability to bounce back from the losses with two wins this weekend.

“If we were at all limping after the Cal or Stanford weekend, this last weekend would have been really tough,” Gallien said. “Just from a mental toughness standpoint, I really give our team an A-plus because they were just very resilient.”

Since junior Sabrina Santamaria suffered a season-ending ACL injury in March, Gallien has used a slew of different lineups, which has made it difficult for the team to get into a groove.

“It really did take us a while to get our sea legs back and almost find out our new identity,” Gallien said. “Had this happened in January, in some ways it might have made it a little easier for us.”

USC’s doubles teams found their footing on Friday. Junior Gabi DeSimone and freshman Zoë Katz raced to an 8-2 victory on court three to get the Women of Troy on the right track. Next, senior Brynn Boren and junior Giuliana Olmos, playing on court two, clinched the doubles point with an identical 8-2 score to put USC ahead 1-0.

Olmos, ranked No. 76 in the nation by the Intercollegiate Tennis Association, continued her success in singles, increasing USC’s lead to 2-0 with a dominating 6-3, 6-1 win over her opponent on court five. ASU would close the gap, though, when No. 49 Desirae Krawczyk topped Boren on court two.

DeSimone put the Women of Troy up 3-1 with a 6-2, 6-3 victory over her opponent, but the Sun Devils kept it close when Kassidy Jump defeated senior Kaitlyn Christian.

With the score sitting at 3-2 in USC’s favor, No. 26 junior Zoë Scandalis clinched the match for the Women of Troy with a hard-fought 7-5, 6-4 win over 68th-ranked Stephanie Vlad on the top singles court.

USC closed out its regular season home slate with a sweep of Arizona (16-5, 5-4) on Saturday.

The Women of Troy came out of the gates strong, clinching the doubles point to go ahead 1-0. This time, Scandalis and Christian took home an 8-2 win on court one before Boren and Olmos topped their opponents, 8-4.

Once again, DeSimone, Olmos and Scandalis carried their team to a victory in singles.

Gallien praised his team’s ability to fight through injury and beat two top-25 teams over the weekend.

“Right now we only have six people that are healthy,” Gallien said. “That doesn’t leave much margin for error. And of those six, believe me, half of them are playing hurt.”

USC must now prepare to take on UCLA to end the regular season. The Bruins have come out on top in the teams’ two previous matchups this season, but Gallien insists his team will play to win.

“You have to go there expecting to win,” Gallien said. “I think you have to have the mindset, even today, of visualizing things happening and playing well and not shrinking from it and not feeling sorry for ourselves.”

USC has reason to be hopeful next year
Scroll to top