Women of Troy prepared for showdown with UCLA 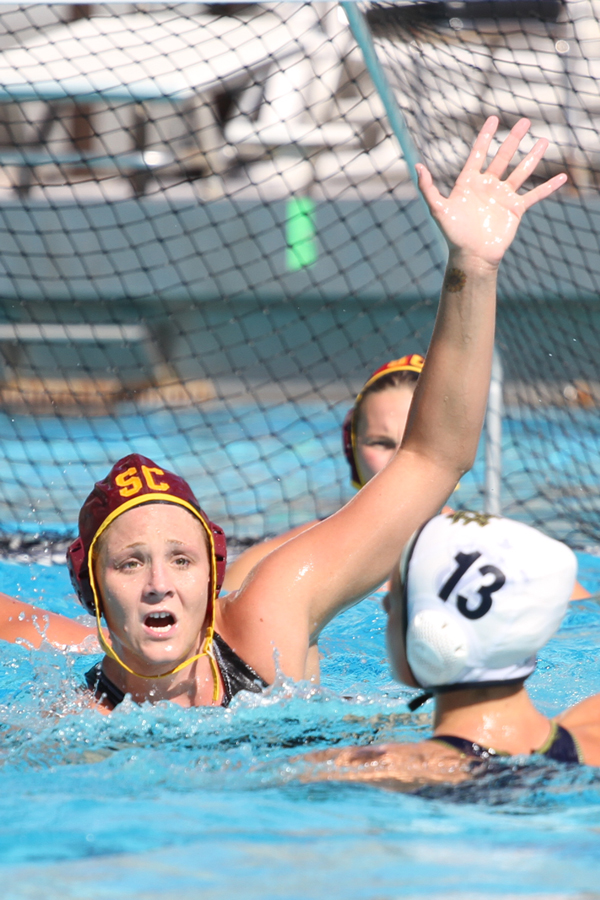 With the postseason just over a week away, the No. 3 USC women’s water polo team (22-1, 5-1 Mountain Pacific Sports Federation) looks to polish off its regular season this afternoon against No. 2 UCLA (22-3, 4-1). A win over the Bruins would complete a perfect regular season at home in the newly renovated Uytengsu Aquatics Center, a good omen for things to come. USC will play host to both the MPSF and NCAA tournaments. The Women of Troy were able to extend the win streak at home last week against a No. 13 Loyola Marymount team that had a difficult time containing the explosive USC offense.

As time wound down in the opening period of play with just four seconds on the clock, junior two-meter Eike Daube slammed in the first of her four goals on the day to erupt the packed crowd. Daube’s goal, in addition to another stellar defensive outing by the entire Cardinal and Gold squad, gave USC a 3-0 lead going into the second quarter.

“As the season progresses and we’re playing with each other more and more, our defense is just going to get stronger,” said senior captain Maddie Rosenthal. “Especially having someone like Flora Bolonyai, who’s an Olympian and arguably the best goalie in collegiate water polo, in the cage — it definitely gives you a lot of confidence on defense. It lets you take a few more risks, knowing that you have such a strong presence in the cage.”

LMU was able to close the gap, using a 6-on-5 powerplay to get on the board, but it wouldn’t take long for the Women of Troy to reassert their dominance. Daube tallied another score, then senior utility Kaleigh Gilchrist followed with one of her own. Co-captain Gilchrist moved into sole possession of No. 12 on USC’s scoring list with the rocket.

The Women of Troy would expand on the scoring frenzy coming out of the halftime intermission. Daube finished off her scoring efforts to increase the advantage to 9-3 before the Lions were able to find the back of the net again.

“I think that in prior games there have been situations where I’ve been hesitant, but after the Stanford and San Jose games, I just had a spark,” said Daube, who has registered nine goals in the past two games. “It just made me want to go for it and not be afraid.”

Heading into the final frame with a 10-4 lead, head coach Jovan Vavic was able to give the starters some much-deserved rest and provide substitutes with invaluable playing time. Junior driver Jennifer Stiefel got things going with back-to-back scorchers that made their way into the cage. Freshman two-meter Avery Peterson capped off the day with a pretty touch that scooted by the outstretched LMU goalie, as the Women of Troy tamed the Lions, 14-5.

As the hungry squad prepares for today’s big matchup, they are not oblivious to the fact that this is not just any other opponent.

“It’s very heated playing UCLA. They’re our crosstown rivals,” Rosenthal said. “I’m not going to say that we like them — after all, it’s UCLA. We are really excited and fired up and looking forward to [the game].”

In the season’s first matchup against the Bruins, USC was able to clinch the UCI Invitational title with a 7-6 victory in its only overtime game this year. Daube led the Women of Troy in scoring, with both goals coming in the extra period to capture the win.

The crosstown rival Bruins enter the matchup coming off a grueling weekend of competition. On Friday evening, the No. 1 Stanford Cardinal eked out a narrow victory, 9-8. The Bruins, however, returned to their winning ways as they took down No. 8 San Jose State at home, 8-6.

“When we played Stanford, we weren’t playing our best water polo. When we play UCLA, we have to play to our potential,” Rosenthal said. “If we’re able to step up and play the type of water polo I know that we are capable of, we should be able to come out with a win.”

Today’s regular season finale tips off at 5:00 p.m. and all coverage can be seen on the Pac-12 Networks.

NCAA rulings are often out of touch
Scroll to top