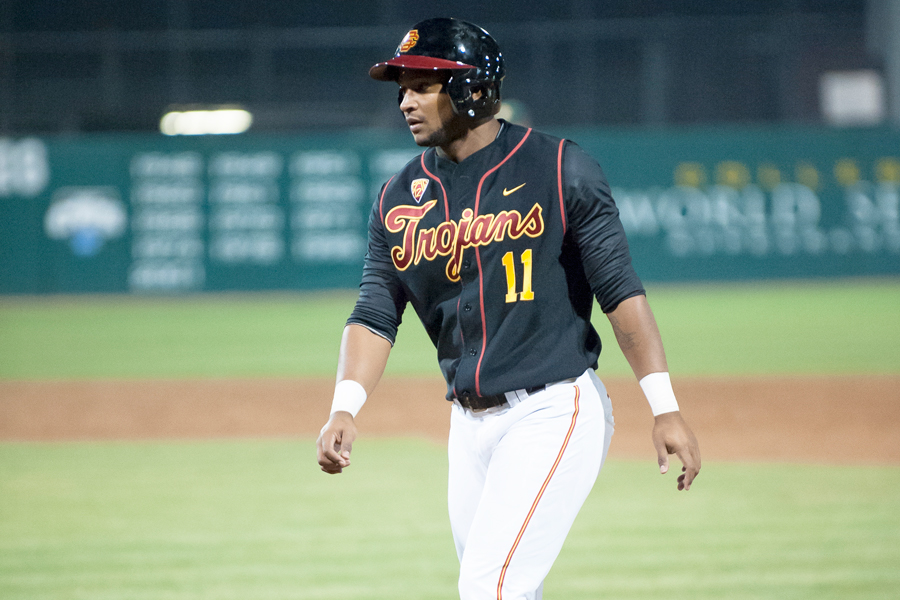 With the baseball gripped proudly in his ungloved hand, USC senior catcher Garrett Stubbs signaled to the umpire that he had indeed made the improbable catch up against the fence of his own dugout. The ball had ricocheted off senior first baseman Jake Hernandez, and danced from Stubbs’s bare hand before it was finally trapped against his chest. It didn’t matter if it seemed like he wasn’t going to catch it; he did, and that was all that mattered. Clutch kid · Redshirt junior left fielder Omar Cotto scored an RBI walk-off single in the bottom of the 12th inning on Saturday. The Puerto Rican also delivered the first of two RBIs in USC’s win over Arizona on Sunday. – Will Ehart | Daily Trojan

So the season has gone for the Trojans, who sometimes bobble the ball, and yet still find ways to come up with it in the end. This weekend’s three-game series sweep against the Arizona Wildcats was the triumphant fist, and gives the team, now 9-9 in conference play and 20-17 overall, a boost of confidence with a couple extra days of rest.

“I’m excited for the guys,” said USC head coach Dan Hubbs. “They kept their energy up all weekend long and, come on, in the past we don’t win a one-nothing, two-nothing game and a 5-4 game in 12 [innings] against a good team that can hit, so for us it was big.”

Senior starter Bob Wheatley, who had the team’s second-lowest ERA in 2013, returned to form in timely fashion in Saturday’s game, which was televised on the Pac-12 Networks. Wheatley pitched seven shutout innings, his first start tossing more than four innings since the loss to UCLA on March 9. The left-hander allowed only three runners to reach base, two singles and a walk, in Saturday’s 2-0 victory.

Hubbs said that Wheatley had been “all out of whack” since the Cal Poly series at the beginning of March and that in the subsequent weeks, they’d been reviewing tape and trying to work out the kinks during bullpen sessions. Hubbs was pleased with what he saw on Saturday.

Wheatley said he’d been struggling with his command, throwing balls and issuing too many walks. He admitted that his pitching performance had been putting pressure on his defense, which in turn came up big during Saturday’s game.

It was finally identifying the problem that gave Wheatley confidence, even when his offense couldn’t plate runs until the seventh inning.

“As a pitcher, you have one job and that’s to get hitters out and the way you do that is just attacking the glove,” Wheatley said. “So I just have to remind myself a few times of that, just because it’s human nature, but there was no doubt we were going to come up with a couple of runs.”

On Friday, junior left fielder Omar Cotto helmed his second walk-off of this season, the eighth total for USC. This time Cotto’s hit was a game-winning single in the bottom of the 12th, and he was rewarded with a pie to the face during a post-game interview. Cotto’s previous walk-off was a three-run monster home run (the first of his collegiate career) against North Dakota State in February.

Cotto’s single on Friday was one of 16 for the Trojans, whose pitching staff held the Wildcats to only five. A tag-team of sophomore pitchers, Brent Wheatley and Kyle Twomey, kept the Trojans in  contention for the win. The latter hurled five complete innings of one-hit ball, at one point retiring 14 consecutive batters.

The weekend of consistent pitching began with junior Wyatt Strahan’s dominant performance on Friday. Last week, Strahan recorded a career-high 11 strikeouts, only to one-up himself in Thursday’s game. The 6-foot-3 right-hander threw his first career complete-game shutout against a team that, heading into the series, led the Pac-12 conference in batting average.

“Wyatt really pitched fantastic on Friday and I think he kind of just showed the way for everybody,” Hubbs said. “I think what it did is it gave confidence to everybody else that they could do the same thing.”

Baseball is as much a mental game as it is a physical one. For the Trojans, performing well is contagious, as evidenced by Strahan’s outing, which propelled the team to a sweep, culminating in Wheatley’s stellar Saturday start. With the performances on the mound (and off it, in the field or behind the dish) starting to strengthen, Hubbs sees a depth that can help the team inch toward contention in the Pac-12.

Next on the schedule is Hawai’i  on Tuesday at 6 p.m. at Dedeaux Field, but Hubbs can’t help but look forward to knocking off the defending national champions and crosstown rival, UCLA, in a series that begins on Thursday.

“They’re a good team. We know that they pitch really well, they get timely hits and they play solid defense and that’s what we think we do,” Hubbs said. “So it’ll be a good series.”

Trojans will thrive in playoff system