Spring game was just for show 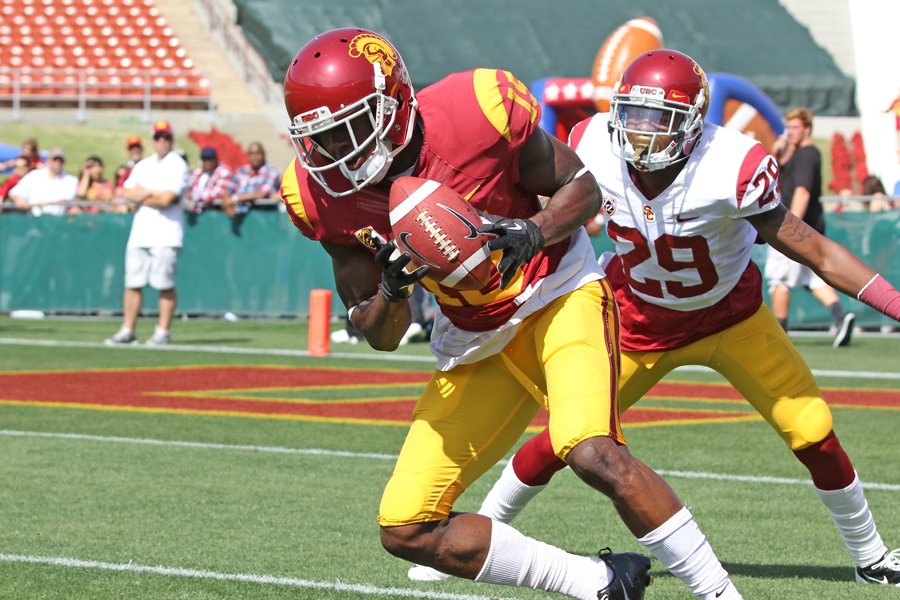 On Saturday, as the start time for USC’s spring game grew closer, play had already begun in Tuscaloosa, Ala., where the Alabama offense sputtered in its first spring game under new offensive coordinator Lane Kiffin. Over 2,000 miles away from here, the Crimson Tide failed to score an offensive touchdown until midway through the third quarter, which drew snickers from many of the Trojan faithful who remember Kiffin’s struggles at USC all too clearly. After the Trojans were kept out of the end zone entirely during their first spring game under new head coach Steve Sarkisian, though, the Kiffin jokes stopped. In what was a mostly uninspired scrimmage, the only real noteworthy happenings were that a little kid threw a touchdown, a random grown man scored a touchdown and Trojan basketball player Katin Reinhardt tried valiantly (but failed) to reach 10,000 Twitter followers.

So no, there was really nothing newsworthy to report from USC’s 2014 spring game, except that there were no major injuries and the 17,500 fans in attendance seemed to have themselves a pretty good afternoon. This is not a bad thing by any means and, in fact, might have been the plan all along.

“We kind of held back today and played smart,” redshirt junior quarterback Cody Kessler said. “We went back and forth, our defense did a great job, and we kept it real simple and, at the same time, gave the fans a show.”

More than 20 injured players were held out of Saturday’s scrimmage, leaving the Trojans thin at several positions, but all are expected to return by the time fall camp starts.

Though Sarkisian admitted that the spring game was more about staying healthy than anything else, he feels that his first spring as USC’s head man was a successful one.

“I really feel like we’ve got our schemes implemented,” Sarkisian said. “For what we do offensively and defensively, which are relatively complex schemes, we got the majority of both of those two things installed and got quality reps at them. When we go back for fall camp, it won’t be foreign to these guys.”

Offensively, the Trojans are nearly through their growing pains in learning Sarkisian’s new fast-paced attack.

When run efficiently, the strategy allows the Trojans to take advantage of their athleticism and get the ball quickly to playmakers in space. At times, the speed with which the offense operates makes it difficult to notice the intricacies that make a given play work, but the end result is nearly always positive.

When the offense hiccups, however, things appear sloppy.

Mistakes are fewer and farther between now than they were three weeks ago, but they still happen from time to time — like on Saturday, when Kessler and the rest of the offense froze at the line of scrimmage, appearing confused, while Sarkisian — whose voice was audible through the Coliseum speakers — shouted at Kessler to snap the ball quickly before calling a timeout.

These types of gaffes are the downside of moving too fast, but they are also the types of mistakes that will go away in time.

“We need to get to the point where we have this offense down perfect in the sense of guys lining up perfect every time,” Kessler said. “We need to get to where there are no communication issues. We can do that. I’m gonna make sure that guys are at every single summer workout, and we’re not just coming out and messing around, but we’re getting better.”

As soon as Saturday’s scrimmage ended, USC’s offensive players were eager to look ahead to the summer rather than reflect on their recent performance, not out of embarrassment, but out of excitement for what lies ahead. They knew better than anyone else that the spring game was not intended to be the indicator of how spring practice went, and they were satisfied with their play during the past three weeks as a whole.

“This spring wasn’t just about today, it was about the 15 practices that we got to get better,” said junior wide receiver Nelson Agholor. “For me, I got better every practice, whether it was weight lifting, field work — it didn’t matter.”

When the Trojans return at full strength in the fall, the real evaluation period will take place. Saturday, though, was a chance for Sarkisian to bask in his return to a fan-filled Coliseum and look ahead to his real debut in late August.

“This is a special place, a special building,” Sarkisian said of the Coliseum. “To come out of that tunnel and coach on that field is tremendous. Hopefully next time we come out, we can score in the red zone and keep tackling and playing defense, and that’ll be the key to success when we come back here in the fall.”

When the Trojans return to the Coliseum on Aug. 30 for their first home game of the 2014-2015 season against Fresno State, that hope will have dissipated, and in its place will be more expectation, more fans and, hopefully, a few more points on the scoreboard.

Nick Selbe is a senior majoring in communication. His column, “Inside the 20s,” runs Tuesdays. To comment on this story, visit dailytrojan.com or email Nick at nselbe@usc.edu.