Hanfmann named Player of the Week 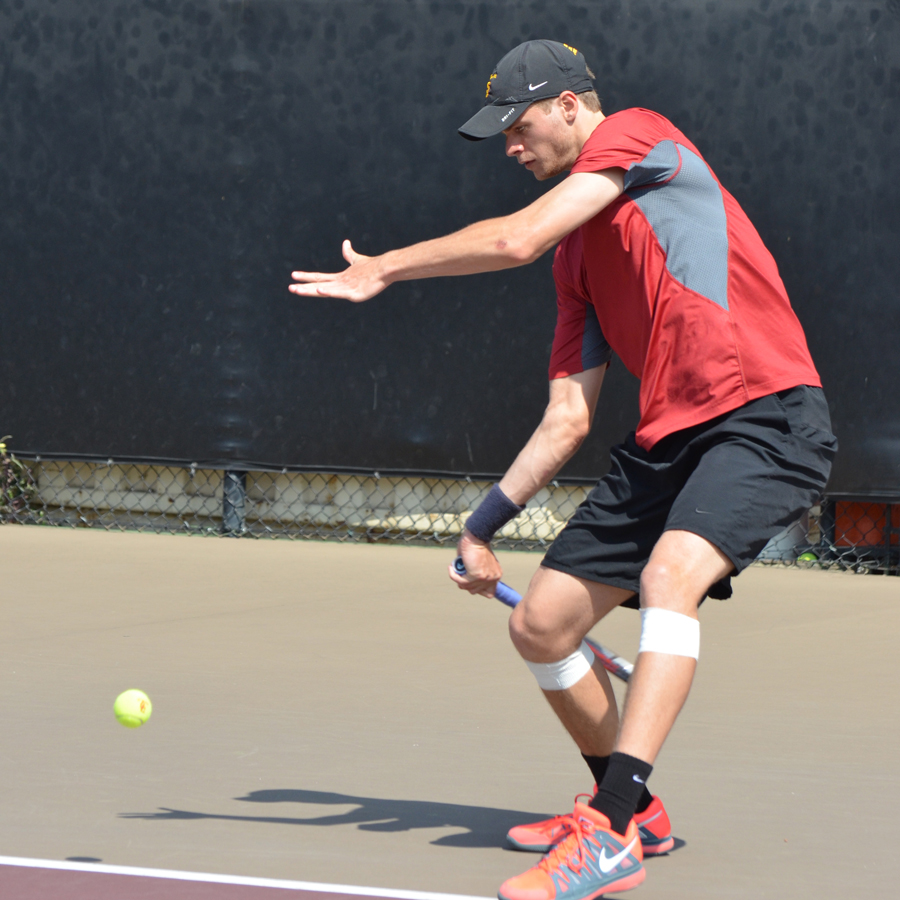 After reclaiming the No. 1 spot in men’s collegiate tennis, the Trojans have yet another cause for celebration: junior Yannick Hanfmann’s spectacular performance against crosstown rival UCLA last week earned him Pac-12 Player of the Week honors. This pair of triumphs for USC and one of its star players is a testament to the chemistry Hanfmann has built with the rest of his team. Best of the best · Junior Yannick Hanfmann upset UCLA’s Clay Thompson, the No. 1 singles player in the country, during the Trojans’ victory over the Bruins last week. Hanfmann is now 18-5 in singles play this season. – Jazmine Rolle | Daily Trojan

Hanfmann left everything he had on court one against the Bruins in the Trojans’ home success over UCLA on Friday, serving up dominating doubles play alongside senior Ray Sarmiento before also demonstrating his singles prowess in an upset of Clay Thompson, who is currently seated atop the national leader board. The No. 2 duo of Hanfmann and Sarmiento found its way to an 8-4 win over the Bruins’ Marcos Giron and Karue Sell, who are currently ranked No. 58 nationally.

In his solo outing, Hanfmann was unyielding in his clash with Thompson, clinching the first set 6-4 before finding himself at a 1-3 disadvantage in the next. He would soldier on to win the second set 7-5 with a powerful finish over the star Bruin, which would bring USC to a 2-1 lead over UCLA. The Trojans eventually toppled the Bruins with a final score of 4-2.

USC’s victory sealed its 7-0 finish in Pac-12 play for the season, with its undefeated record ensuring the No. 1 seed in the upcoming Pac-12 Tournament. This also marks the second time in the past four seasons that USC has finished regular-season Pac-12 play undefeated. The Trojans ended the season with a 25-2 mark overall, while UCLA boasts a 20-3 overall record and a 6-1 mark in conference play.

The successful game against UCLA comes as the Trojans’ 16th straight win. Hanfmann’s defeat of No. 1 Thompson brought him to an 18-5 record in singles play on the season, and his doubles record with Sarmiento sits at 13-1.

This is Hanfmann’s second conference Player of the Week award this season — the native of  Karlsruhe, Germany was also honored after his team’s sweep of Florida and Georgia in the Pac-12/SEC Showdown in early February. Hanfmann’s teammate, junior Roberto Quiroz, has won the award twice, and Sarmiento has won once.

USC tunes up for the MPSF tournament