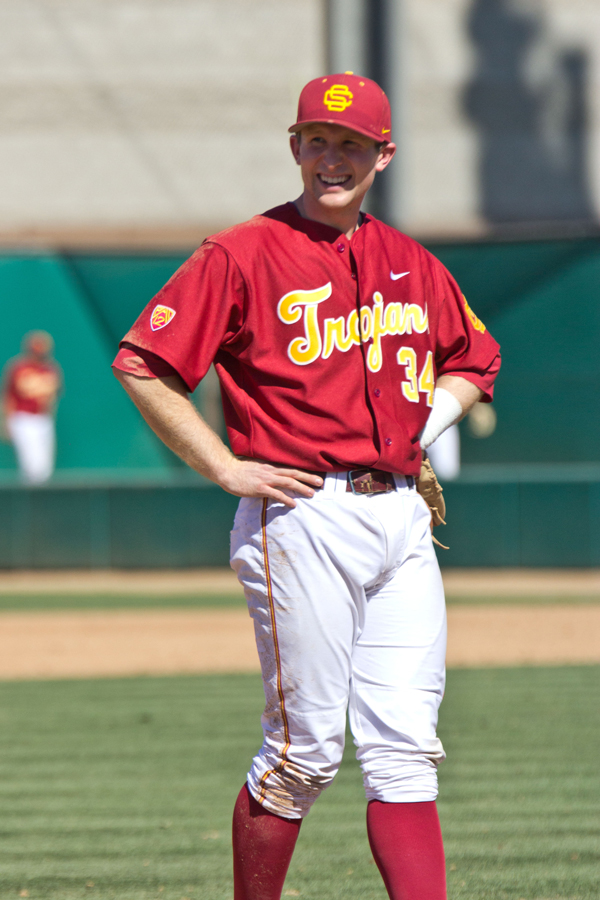 The USC baseball team kept its six-game winning streak alive Tuesday night against the University of Hawai’i, just two days before an all-important series with crosstown rival UCLA. The Trojans handily put away the Rainbow Warriors 10-4 at Dedeaux Field in one of their last weekday home games of the season. Sophomore Brooks Kriske commanded the game on the mound from the beginning, going 4.2 innings and allowing only one earned run on six hits. The Trojans were led at the plate by junior Jake Hernandez, freshman Jeremy Martinez and sophomore Timmy Robinson. The Trojans can attribute their winning streak to vast improvement at the plate. On Tuesday, seven different Trojans had a hit, with four having multi-hit outings in the batter’s box.

Senior infielder Kevin Swick believes that the team’s newfound confidence at the plate has made a definite impact in helping to score runs and win games.

“We know now that we can get it done at the plate in the big spot,” Swick said. “That’s something we haven’t really been able to do in the past. It’s definitely exciting that we’ve finally gotten our hitting rolling. I know everyone on the team is feeling really confident right now.”

This weekend, the Trojans will take their crosstown rivals at Jackie Robinson stadium in Westwood. Thursday and Friday night’s games will be broadcast on the Pac-12 Networks at 6:00 p.m. and 7:00 p.m., respectively.

In 2013, the last time these two teams met, the Bruins swept the Trojans in an embarrassing weekend series at Dedeaux Field, during which USC struggled to turn hits into runs.

The Trojans believe that their recent hitting and winning streak will help to make this year’s series far more competitive.

“Tuesday’s game kept us on a roll and when you have momentum like that, you start to feel really confident, like you can face anybody, so that’s really huge for us going into this weekend,” Swick said. “We’re going to be facing a lot of good pitchers this weekend so we have to be as confident at the plate as we have been in recent games.”

The numbers indicate that USC could have the advantage this weekend in terms of hitting, given that the Trojans currently have four players batting over .300 while the Bruins only have one, but UCLA could hold the upper hand at the mound.

Last year, an offensively challenged Bruins team rode their pitching and defense to a national championship. The anchor of that pitching staff, closer David Berg, has been dominant this year with a 1.63 ERA in 25 appearances. Another key member of UCLA’s pitching staff has been RHP James Kaprielian, who is 5-3 with a 2.12 ERA in 10 starts this season.

Statistics aside, Swick feels the Trojans must, first and foremost, keep calm and focused to pull wins this weekend.

“We’re going to approach this weekend like any other weekend, but at the same time, it is UCLA and playing your rival is always challenging, especially on the road,” Swick said. “Our biggest challenge is going to be keeping our emotions in check and staying steady. If we do that, I think we’ll be good this weekend.”

Calhoun has a true love for the game
Scroll to top