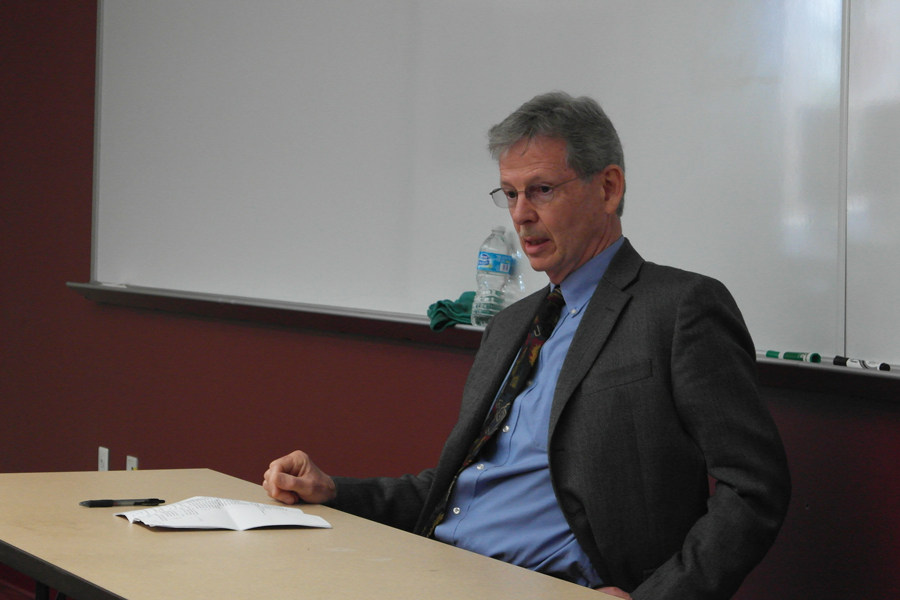 Professor Robert Springborg, a recent retiree from the U.S. Naval Postgraduate school in Monterey and an expert on Egypt and its military, spoke to students in Ronald Tutor Campus Center Tuesday afternoon about the structure and role of the Egyptian military during and after the revolution in 2011 that deposed former president Hosni Mubarak. The event was sponsored by the Middle East Studies Department.

Springborg, who is a visiting professor on war studies at Kings College, London and the director of the American Research Center in Cairo from 2000-2002, discussed the structural characteristics of the Egyptian military, internal politics of the country, and what policy the US should pursue in the region. Professor Robert Springborg discusses the structure and role of the Egyptian military during and after the revolution in 2011. — Photo by Christine Yoo

“This is a significant military by any measure and certainly in the Middle East,” Springborg said. “If you want to look at control of the military in the Arab world, you can’t use the standards you would for a democratic state.”

The Egyptian military, which is 500,000 strong with both significant armored and air capability, is the largest military force in Africa and one of the larger military forces in the world. Springborg compared different aspects of the military to the militaries of many countries in South America, where literature on the role of the military is widely available.

“Brazil, for example, has a GDP that’s ten times higher than Egypt, yet military is 40 percent smaller,” he said. “In terms of the share of the economy, the Egyptian army is much larger.”

He said that one metric to measure the size of the military is to look at the number of soldiers and officers per 10,000 civilians. In Egypt, the number is 190, and if you include barracked police forces, it is as high as 415. He said the average in Latin America, by comparison, is closer to 30.

He also noted that the military operates its own court system where civilians can be tried. Under a previous constitution, civilians could be tried for “crimes that harmed the armed forces” in military courts. That definition was narrowed under the 2014 constitution, but still gives the military sweeping judicial authority.

“The military has basically empowered itself to try whoever it wants under its own court system,” Springborg said.

The military conscripts 325,000 per year, but Springborg said that a large portion of them are used for labor in the military factories and other companies. He said it is typical to serve the last six months of a three-year conscription in military company, while still earning conscript wages.

“You have a large army for show so that you can justify having a large officer corps that you enrich and are loyal to you, and that helps protect the presidency,” he said. “It’s highly stratified [and] inward-looking — it’s not focused on fighting, but on enriching itself.”

The talk then shifted to the internal politics of the military, and the restructuring that took place during the revolution. The professor referenced incidents of corruption and cronyism within the military. He spoke in particular about Field Marshal Abdel Fatah al-Sisi, a presidential candidate in Egypt who previously controlled the Ministry of Defense. Springborg said al-Sisi has consolidated power by placing supporters in key government positions.

Springborg said the United States lost face when dealing with the Egyptian military following the ousting of President Mubarak. He referenced an incident when the military, headed by Mohamed Hussein Tantawi, was angered by the US sending $63 million in aid to civil society and humanitarian efforts in the country. Then Secretary of State Hillary Clinton chose to suspend the payment, which Springborg said was symbolic of the US handling of the situation.

“[The United States] didn’t back the revolutionaries either in word or in deed,” he said, “We realized this was a two-horse game, when the [Muslim Brotherhood] failed, we switched horses and now back the officers.”

Students who attended the event found it informative and engaging.

“I didn’t realize how big the military in Egypt was and I didn’t know how different it was from other countries particularly in terms of its size relative to the economy,” said Erica Behrens, a sophomore majoring in international relations.

“It’s interesting to hear these kind of inside analyses,” Peabody said. “he has a counterintuitive perspective on some issues that were really fascinating to hear about.”