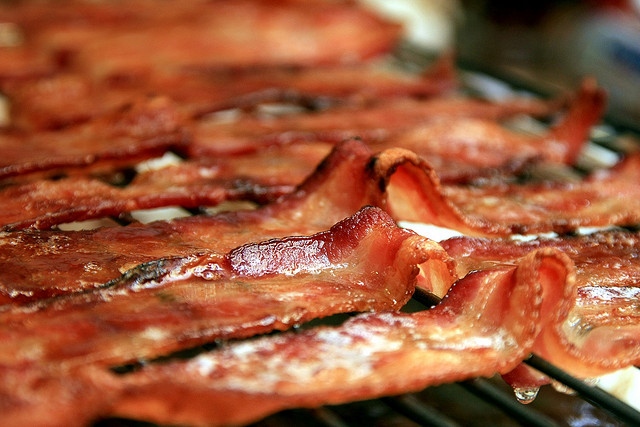 I have this thing for cured pork meat product: bacon.

This love — or obsession — began at a young age and started mostly because of healthy childhood deprivations. My mom is a total health nut (love you, Mom!), but because I was deprived, my love only grew stronger. I wish I could remember when this obsession started. I must have been in elementary school. According to my mother, this was the most difficult time in my young foodie life because I was a picky eater when it came to my mother’s food but ate everything else. Elementary school provided an opportunity to try the unhealthy cuisines that I did not normally eat at home – I’m talking hot Cheetos, white bread, fruit snacks and bacon on toasted wheat bread.

One bite of bacon and I was hooked.

I remember asking my mom why we never ate bacon, and later, at the grocery store, placing the first packet of bacon I could find in our cart. I later found that my mom had either put back the bacon or replaced with the ever-so-cardboard-like and healthier turkey bacon. My mom was not raised on red meat, so there was never a chance of getting her to buy bacon.

My father, on the other hand, basically came from Neanderthals. I favor my caveman-like qualities over my mother’s careful and healthy eating habits, but don’t get me wrong when I say that I can grub on quinoa and vegan eats with the best of them – it just so happens that I eat everything.

Every morning, without fail, I crave something savory and delicious, something that will kick-start my taste buds for a day full of class. But sometimes a bowl of yogurt and granola just doesn’t cut it. Sometimes, all I need is a succulent double bacon cheeseburger from Hodad’s followed by a visit the local Jack in the Box for a bacon milkshake.

I want to be practical with my bacon obsession because I do believe in moderation, but since bacon has become a foodie’s obsession, it is difficult to not want to wrap your life in it.

Constant bacon consumption has its pros and cons, but the main pro is that bacon is awesome and it goes perfectly with anything. The con is the rumor that every piece of bacon consumed shortens your life by a year – at least I will be happy.

Alegra Hueso is a sophomore majoring in creative writing.  Her column “In Love With the Edible” runs on Wednesdays in print and Fridays online.