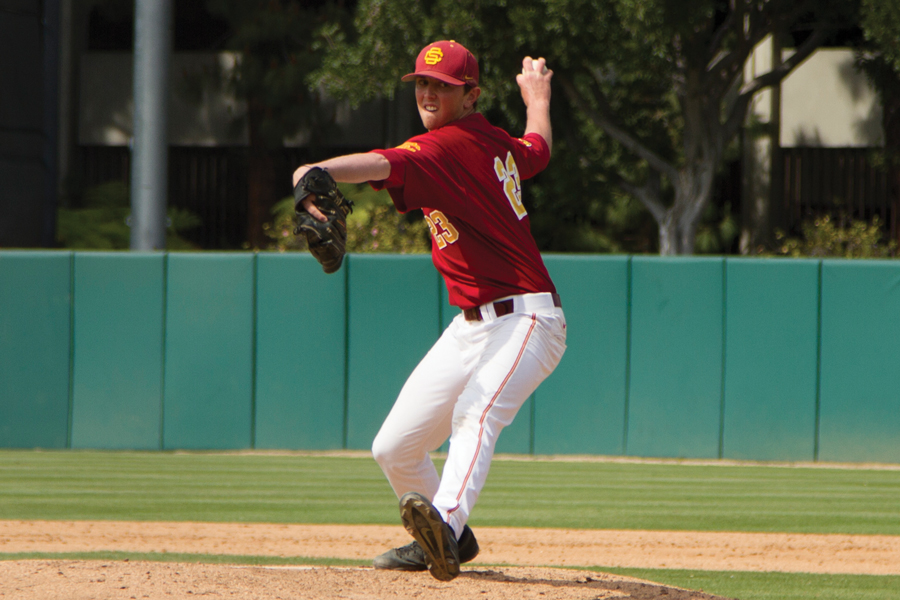 The USC baseball team is hoping to secure its 10th straight win tonight against the UC Irvine Anteaters after sweeping crosstown rival UCLA last weekend. The Trojans (24-17, 11-9 Pac-12) swept the Bruins for the first time since 2005, thanks to stellar starts on the mound by junior Wyatt Strahan and sophomore Brent Wheatley and key relief pitching by freshman Jeff Paschke and sophomore Kyle Davis. The Trojans started off the weekend series strong at the plate, handily beating the Bruins 10-0. Friday’s match was more competitive, featuring excellent pitching from both teams, though USC managed to secure the 3-2 win.

Saturday proved to be the series’ most exciting match. After getting off to a very slow start at the plate, the Trojans scored seven runs on seven hits during the top of the ninth inning to come back from a four-run deficit and win 7-4. USC now holds the No. 3 spot in the Pac-12 conference standings while the Bruins fell to No. 6.

As a result of his impressive hitting and fielding during this weekend series, senior Jake Hernandez was named Pac-12 Player of the Week. Hernandez hit .556 and tallied 10 hits during the past four games, including multi-hit outings in each game. In the three games against UCLA, he went 7-13 with four RBIs.

Coming off the exhilarating weekend, the Trojans will face the UC Irvine Anteaters at Dedeaux Field tonight.

“We know what we have in front of us; we know that Irvine is a really good team,” Hubbs said. “We had Sunday to celebrate the sweep, then Monday we practiced and prepared for Irvine. We know what’s at stake. We can’t lose our momentum now. We can only focus on the game right in front of us.”

The Anteaters will enter tonight’s game after sweeping UC Davis last weekend in Davis, Calif. Currently, UC Irvine holds a 28-14 overall record, an 11-5 away game record and an 11-1 record in the Big West conference. The Anteaters are led at the plate by infielders Connor Spencer and Jonathan Munoz, with  .363 and .333 batting averages, respectively.

The last time USC faced UC Irvine, on March 4, the Trojans failed to play their best defensively and fell 6-4 to the Anteaters. All five USC pitchers had trouble on the mound that day and failed to prevent UC Irvine from producing key hits and eventually taking the win.

Two months later, however, Hubbs feels that the Trojans are more than capable of beating the Anteaters.

“I think we’re pretty evenly matched with Irvine going into tonight’s game,” Hubbs said. “We need to pitch well, there’s no doubt. We can’t give them many free bases because they will take advantage of that. They don’t walk many people, so we’re gonna have to be opportunistic when they give us an opportunity to score because they don’t give you a whole lot. I think whoever plays the best will win tonight.”

Though the Trojans have pitched extremely well recently —  especially the starting pitchers — the numbers indicate that UC Irvine might hold the advantage on the mound. Currently, the Anteaters hold an overall team ERA of 2.53 as opposed to the Trojans’ 3.39. The Anteater pitching staff is led by starter Andrew Morales, who currently holds a 7-0 record and an impressive 0.78 ERA.

Sophomore righthander  Brooks Kriske will take the mound for the Trojans tonight at 6 p.m. at USC’s Dedeaux Field.

Despite the growing anticipation for the approaching postseason and mounting pressure to keep the team’s win streak alive, Hubbs stresses the importance of the Trojans remaining calm and focusing on one game at a time.

“We’re in a position now where we could make a serious run at the postseason,” Hubbs said. “We can only worry about the game that’s in front of us. The kids have been doing a good job of that and I think that’s why we’ve got this winning streak going. I just keep telling them, we just have to win one game and then we can worry about the next one. If we do that, then I really think we’re in a position to win tonight and keep this streak going.”

With only 12 games left in the regular season, the Trojans realize they must now concentrate on the areas in which they need most improvement. Though the team holds an impressive nine-game winning streak, Hubbs believes that the Trojans must improve their weak points to make a good run at the NCAA playoffs in May.

“I think we need to continue working on getting that big hit with men in scoring position,” Hubbs said. “In terms of pitching, we just need to be even more consistent on the mound with our starts. The reason we’ve played so well the last couple weeks is because our starting pitching has been good. And that has to stay because if it doesn’t, then we’ll be in trouble. That’s the biggest key is our starting pitching and getting big hits in big spots. More than anything, we’ve just gotta keep it small and play our game the way we know how to play it.”

Change of plans paid off perfectly
Scroll to top