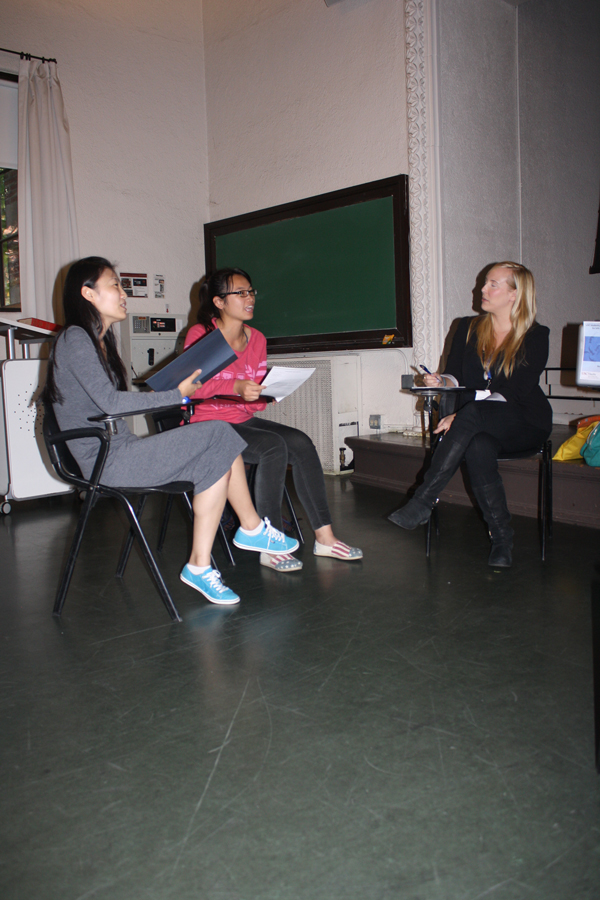 ABC’s hit TV show Shark Tank, a reality series in which up-and-coming entrepreneurs pitch their products and ideas to a panel of investors, hosted an open call yesterday afternoon in Mudd Hall of Philosophy. The reality show’s casting team heard more than 25 pitches from USC students, alumni, faculty and staff in conjunction with the Health, Technology and Engineering program.

HTE@USC is an interdisciplinary program for graduate students co-sponsored by the Keck School of Medicine and Viterbi School of Engineering that focuses on bridging the gap between medicine and technological innovation.

Nadine Afari, project specialist for HTE@USC, and Mindy Zemrak, casting manager for Shark Tank, both proposed the open house. Zemrak is an alumna of the School of Cinematic Arts, and the two were able to connect via Twitter when Zemrak was looking for a way to come to campus and host an open house.

“I knew USC would be a perfect fit on stops for open calls [for Shark Tank] at universities,” Zemrak said. “Its entrepreneurial student body and top-notch academic reputation stood out the most.”

Shark Tank premiered in 2009 and earned an Emmy Award nomination in 2012 and 2013 for Most Outstanding Reality Program. The show is centered on hopeful entrepreneurs who pitch their ideas to potential investors, such as Dallas Mavericks owner Mark Cuban, successful real estate entrepreneur Barbara Corcoran and clothing line founder Daymond John, in the hopes of landing one or more of the “sharks” as investors and partners in their business.

Last season drew over 40,000 applications to be on the show. Even those who walk away with no deal still gain exposure to nearly 7 million viewers during their pitch.

Shark Tank typically does general open casting calls, but this season chose to focus part of its efforts on college campuses. The idea of coming to colleges to search for talent was something that will be present much more in the upcoming season.

“We have been to Harvard, UT Austin, UNLV, Ohio State, San Diego State University and University of Colorado at Boulder,” Zemrak said. “There is a possibility that this season will have a college-focused episode entirely devoted to student-based entrepreneurs.”

“Today we were able to allow all of our campus the opportunity at being on [Shark Tank] — it really is great,” Tolomiczenko said. “I’ve already seen a team in here today that had students from Viterbi, Keck and Marshall — a collaboration across USC which is exactly what we are aiming for.”

Those who attended were allotted roughly one to two minutes to pitch their ideas to the casting team, similar to an ordinary open call.

A follow-up will happen in the coming weeks, and then those selected must put together a five to 10-minute video where they demo the product or service they pitched, which is then seen by producers before the contestant pool is cut down once again.

Zemrak described how rewarding it has been to work on the show since the first season; she currently serves as the casting director for the show.

“We are definitely the little show that keeps growing and growing,” she said. “I’ve seen people’s lives changed just from being on the show, which makes my job that much more satisfying.”

She noted that studying at USC was instrumental in getting her to where she is today.

“My time at USC greatly prepared me for what I’ve been doing in my career thus far and provided me with the tools I needed to be successful in television,” Zemrak said.

Those who missed out on the open call yesterday at Mudd Hall are still able to apply for the show via the website, ABC.com. There is also an open call being hosted in San Diego, Calif. at Coleman University the first weekend of June. More details can also be found on the Shark Tank website.

Do you believe in magic?
Scroll to top