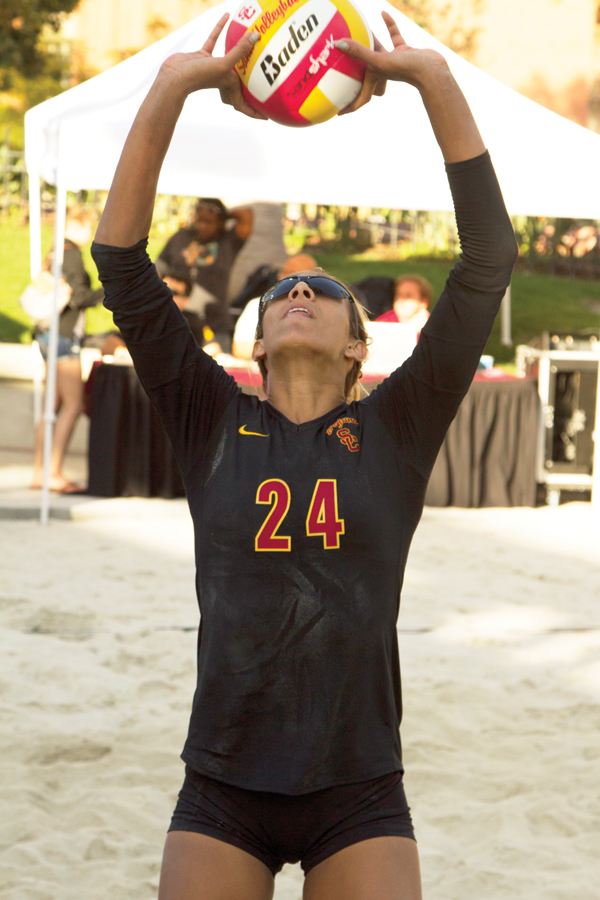 The No. 1-ranked USC sand volleyball team will put its 21-match winning streak to the test this weekend at the 2014 American Volleyball Coaches Association Collegiate Sand Volleyball National Championships in Gulf Shores, Ala. The event will start on Friday with preliminary action, followed by team and pair championships on Saturday and Sunday, respectively. Killin’ it · Sophomore Alexa Strange, a transfer from Nebraska, has won 31 of her 36 matches this year while paired with freshman Kelly Claes. – Tucker McWhirter | Daily Trojan

The Women of Troy (22-1) increased their school-record winning streak with a pair of 5-0 sweeps over Arizona and Boise State last Saturday. Neither the Wildcats (7-12) nor the Broncos (4-7) advanced to the AVCA tournament.

USC has now tallied five consecutive sweeps, and has dropped a pairs match only six times this season. The team’s one defeat came at the hands of No. 2 Pepperdine, a perennial powerhouse that was the nation’s top team at the time. The Waves (15-1) enter the AVCA tournament as the second seed. Seeded third is No. 3 Florida State, a team that the Women of Troy edged out by a 3-2 margin in March. No. 4 Hawai’i, No. 5 Florida International and No. 6 Stetson also qualified for the event. USC, which along with Pepperdine earned a first-round bye, will open up play against the winner of a first-round match between the Rainbow Warriors (18-3) and the Panthers (14-2).

Though the Women of Troy are a young team, they have shown depth and maturity beyond their years in 2014. Even on court five, the freshman pair of Nicolette Martin and Allie Wheeler has been an intimidating force. The duo has an overall record of 21-5, but has been especially dangerous in dual matches, where they are 20-1. Martin and Wheeler’s win over Samantha Cash and Taylor Racich of Pepperdine in late March helped seal USC’s rematch win over then-No. 1 Pepperdine. It will take this type of team effort to secure the Women of Troy’s first team national title.

A pairs’ championship will also be up for grabs this weekend, and USC should be competitive in that arena as well. Senior Kirby Burnham and freshman sensation Sarah Hughes have had an amazing season together, winning 36 of their 39 matches. Freshman Kelly Claes and sophomore Alexa Strange have also been nearly unstoppable, going 31-5. Interestingly, one of the duo’s losses came at the Pac-12 Pairs Invitational against Burnham and Hughes. Still, the road to a national title will not be easy for either pair. Both have lost to duos from potential opponents Florida State, Hawai’i or Pepperdine.

Last year, in only the program’s second season in existence, Burnham teamed with Stevi Robinson to produce a 25-4 overall record. The tandem won their last eight matches including four at the AVCA Championships on May 5 of last year to claim USC’s first-ever pairs championship in sand volleyball. They were each later named the first-ever sand volleyball All-Americans in USC history. Burnham, Hughes and the rest of the team will attempt to repeat history this weekend in Alabama.

The Women of Troy have a very unique group of players and coaches, including three-time Olympic Gold Medalist Misty May-Treanor. May-Treanor has been a guiding force at USC since leaving her alma mater Long Beach State to join head coach Anna Collier, one of her mentors, in Los Angeles. All three of the team’s coaches have experience at the professional level.

The Women of Troy should be well prepared as the head into the year’s final tournament, but must stay focused and disciplined during this next week. Though the team is undefeated both at home and neutral sites, it cannot take any of the tournament’s matches lightly. Revenge-minded Pepperdine will surely remember its 5-0 defeat of USC early in the season, while No. 3 Florida State will have local fan support.

The Women of Troy will begin their title chase this Friday at 12 a.m. against the winner of Hawai’i and Florida International. Matches will be broadcast on tape delay on CBS Sports starting Monday, May 26.