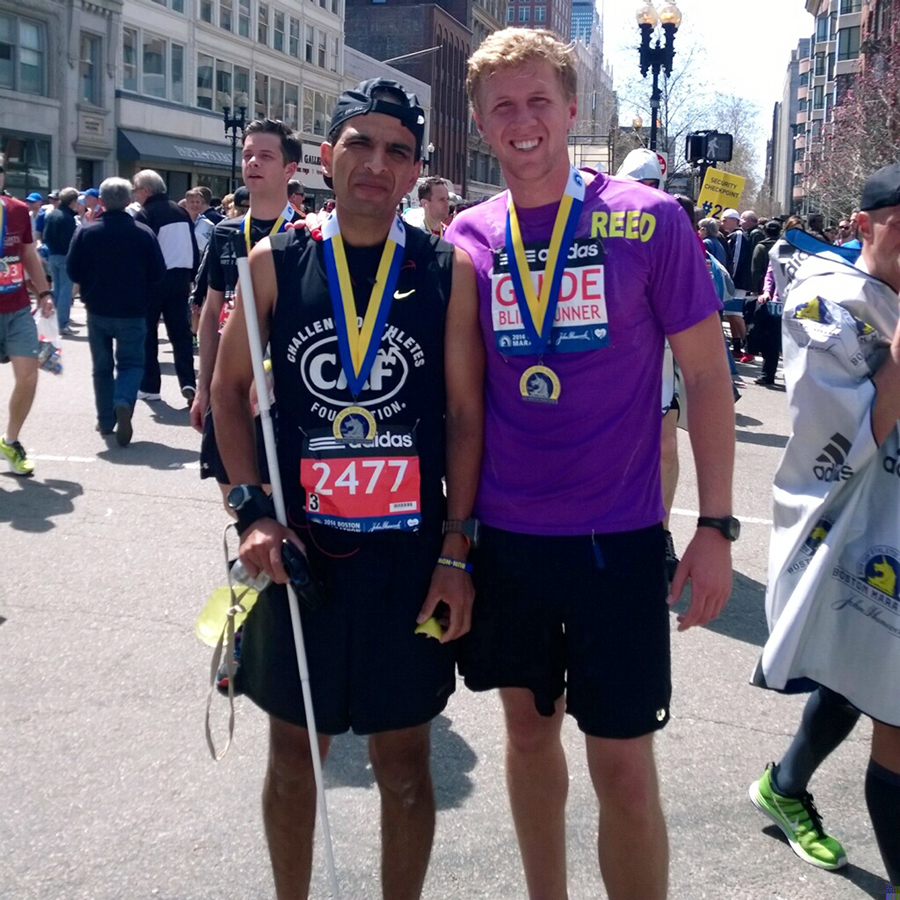 Reed Semcken, a senior majoring in business administration, never expected to line up with approximately 36,000 other runners for a marathon, and he certainly never expected to do so tethered to another runner, but that’s exactly what happened at the Boston Marathon earlier this month. Just keep running · Adrian Broca (left), a blind runner, and Reed Semcken (right), a senior majoring in business administration, pose for a picture after the 2014 Boston Marathon, which was held on Monday, April 21. – Photo courtesy of Reed Semcken

Even though Semcken’s parents both run marathons, he had never been much of a runner himself. This year, however, he made a New Year’s Resolution to run the L.A. Marathon, and it led him on an unconventional journey to run in Boston shortly after.

Semcken began training in early January for the March 9 Los Angeles race but admitted that there was not much structure to his training regimen.

“I just went out and ran until I got tired,” Semcken said.

“I got a team and a coach, and that gave me more support and knowledge going into the marathon,” Semcken said.

“My dad lives along the marathon route, so he got me to stop and take a Christmas card picture along the route,” Semcken said.

He noted that the 15 or so seconds it took to snap the photo cost him his Boston Marathon eligibility.

“My dad was devastated,” Semcken said. “In his frantic state, he started calling everybody from the Boston Marathon that he could.”

When Semcken’s father finally heard back from Boston Marathon officials, he learned that the 2014 race was full, but that Semcken could participate as a guide for a blind runner.

Semcken was paired with Adrian Broca, a Santa Monica resident and a two-time winner of the Boston Marathon Visually Impaired Division. Like Semcken, Broca had never been much of a runner growing up. When he was 18, however, he began to lose his eyesight and began running as a way to cope with this new disability.

“Seeing what running meant to [Broca] added so much excitement and so much anxiety -— if I got hurt or if I cramped on the route, his marathon was over,” Semcken said.

Semcken was one of four guides, each of whom ran with Broca for 10 kilometers of the marathon.

Running as a guide obviously changed some aspects of the running experience, Semcken noted.

“[Broca] literally takes a shoelace, and I take the front of the shoelace and he takes the back,” Semcken said. “It’s very awkward, especially for a marathon, because you’re twice as wide and twice as long.”

When running a marathon, size matters, especially at the beginning of the race. Semcken ran the first 10 kilometers of the marathon with Broca.

“The other three runners had guided before, and they all said they’d take any 10K but the first 10K,” Semcken said.

Though Semcken didn’t immediately understand the preference of the other guides, he definitely understood on the day of the marathon.

“You’re guiding a blind runner through 36,000 people — at the start of any marathon that’s where the crowd is,” Semcken said.

Nonetheless, Semcken and Broca managed to navigate through the crowd of runners for the first 10K of the race.

Semcken had been disappointed to learn upon arriving in Boston that guides were no longer permitted to run the whole marathon.

“It was devastating to me,” Semcken said. “I’d flown out to Boston and I’d been training for months.”

But at the end of his 10K shift, Semcken was met with unexpected leniency.

“There’s a police officer that’s supposed to intercept me, and he just said, go on man, keep running,” Semcken said.

“I got to be there with [Broca] at the finish line,” Semcken said. “I don’t want to call it life-changing and be dramatic, but it was an incredible experience … Every marathon that [Broca] runs is an unbelievable struggle, as he’s running in complete darkness.”

Semcken said he was just one of the many who had a remarkable experience at the marathon, especially in light of last year’s tragedy.

“Every person that I told I was doing the marathon had a story to tell about it,” he said. “It was a very humbling experience to participate in an event that has such significance to so many people, especially the year after such a huge tragedy.”