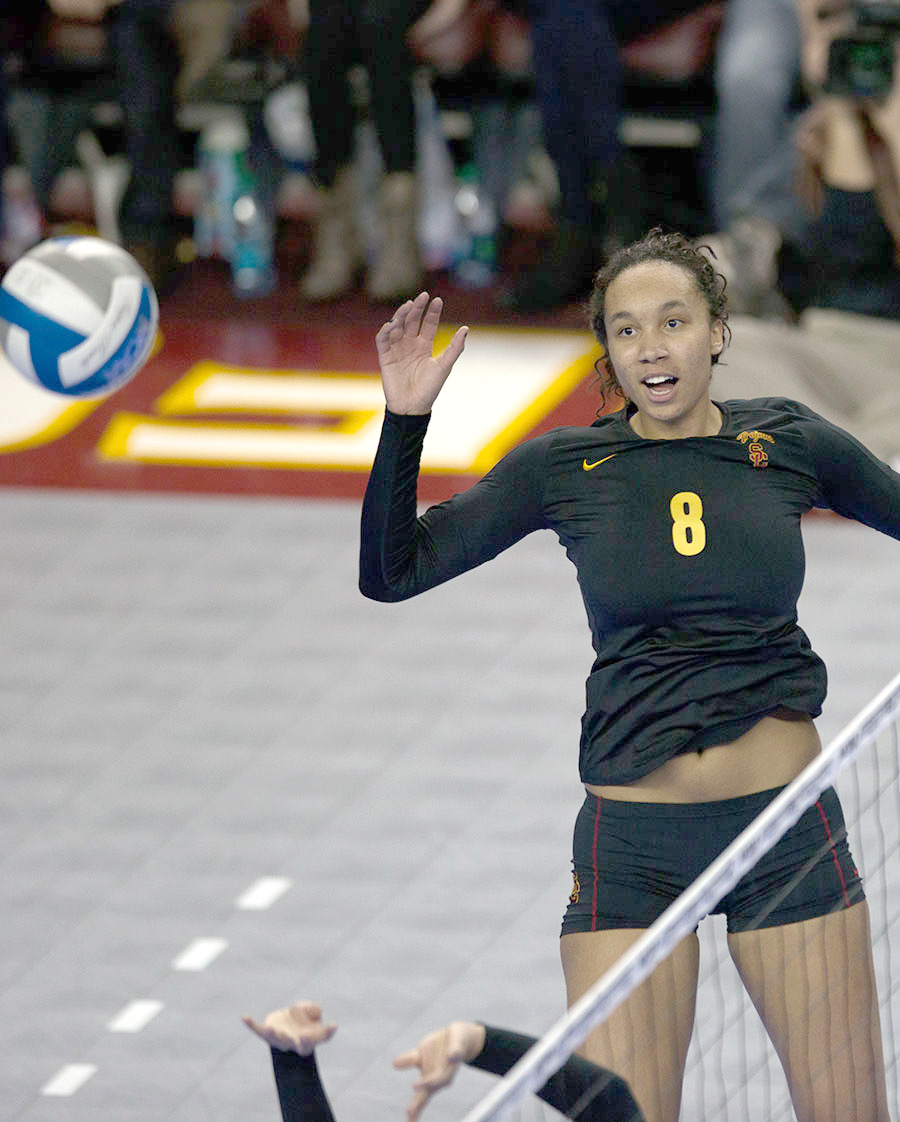 After a successful opening weekend, the USC women’s volleyball team is heading to their second straight road tournament, the Commonwealth Classic in Lexington, Kentucky. The No. 6 Women of Troy will face two tough foes on their weekend trip: Creighton and No. 16 Kentucky. Block trial · Junior middle blocker Alicia Ogoms helped lead USC to a school-record 21 blocks in their win over Pacific last Saturday. Ogoms started 27 matches as a freshman before missing most of last season due to injury. – Ralf Cheung | Daily Trojan

The squad opened up its season last weekend at the Community Bankers Volleyball Classic in Stockton, California. There the Women of Troy faced unranked opponents Rider, Arkansas-Little Rock and host Pacific. In their first two matches against Rider and Arkansas-Little Rock, the Women of Troy made quick work of their foes, winning in three and four sets, respectively.

USC’s final match against host Pacific was a grudge match of sorts for head coach Mick Haley. The Women of Troy had struggled against the Tigers in the past, with an 8-10 all-time record. With a very rowdy and intense crowd, the Trojans pulled out a victory in a five-set thriller to bring their record to 3-0 on the season.

Haley  admitted that the Pacific crowd caused his team some trouble.

“Pacific kept us from scoring and they played really scrappy defense,” Haley said. “They also served us smart in a couple of rotations and they had a powerful left hander that lit us up for a bit.”

After the tournament, it was announced that junior outside hitter Samantha Bricio was named Most Valuable Player. Bricio had 31 kills and 28 digs in only 12 games played over the three matches.  During the Pacific match, Bricio moved into third place in school history with 142 aces, passing USC great Alex Jupiter.

Haley praised Bricio’s performance over the course of the tournament.

“Sam has improved a bunch on her passing,” Haley said. “Once she gets consistent with her shorter arm swing, watch out, she’ll be tough to stop.”

Also recognized were freshman outside hitter Lauryn Gillis and junior middle blocker Alicia Ogoms, both of whom joined Bricio on the All-Tournament team. Ogoms helped the team match a 10-year-old single-game mark with 21 total blocks against Pacific.

Without sophomore outside hitter Ebony Nwanebu, who missed the tournament due to an undisclosed injury, the Women of Troy’s attack had to rely mainly on Bricio and Gillis.

In the first game against Rider, Gillis shined with 11 kills on only 14 swings, giving her a .714 hitting percentage. Though she had great hitting success, the New Castle, Indiana native felt that her passing and defense were most important to the team’s success.

“I love playing defense,” Gillis said. “I like making the momentum plays, like a big block or a great defensive play.”

This coming weekend, the Women of Troy will face off against the 16th ranked Wildcats on Friday before taking on Creighton and Northern Iowa the next day. The Bluejays, though currently unranked, are a perennial contender who came into the season ranked 23rd. This tournament will be yet another early test for this young team.

Going into Lexington, USC is ranked sixth according to the American Volleyball Coaches Association poll and the NCAA top-25, and are looking to improve upon those rankings with a win against Kentucky. This game figures to be a tough test, especially considering the Wildcats’ multiple schemes.

Senior Hannah Schraer knows that the hosts will be a tough team to beat.

“They are bigger than the teams last weekend,” Schraer said. “They are very athletic and they have a very strong defense, especially in serve-receive.”

The Trojans will get a huge boost this weekend from Nwanebu, who will see her first action with the team after a record-setting freshman season. The Lucas, Texas native was 2013’s AVCA National Freshman of the Year.

Nwanebu’s return will give the Women of Troy a one-two punch with Bricio and Nwanebu hitting up front. Gillis will also continue to mix into the lineup.

In the back row, there will still be an open competition for the libero position. Sophomores Anne Marie Schmidt and Taylor Whittingham both saw action during the Bankers Classic.

This weekend will be a homecoming of sorts for Gillis, whose family home is not far from Kentucky.

“My family is going to be there,” Gillis said. “Maybe even my whole town.”

The Women of Troy will look to come home with an undefeated 6-0 record going into their first home tournament, the USC Classic.