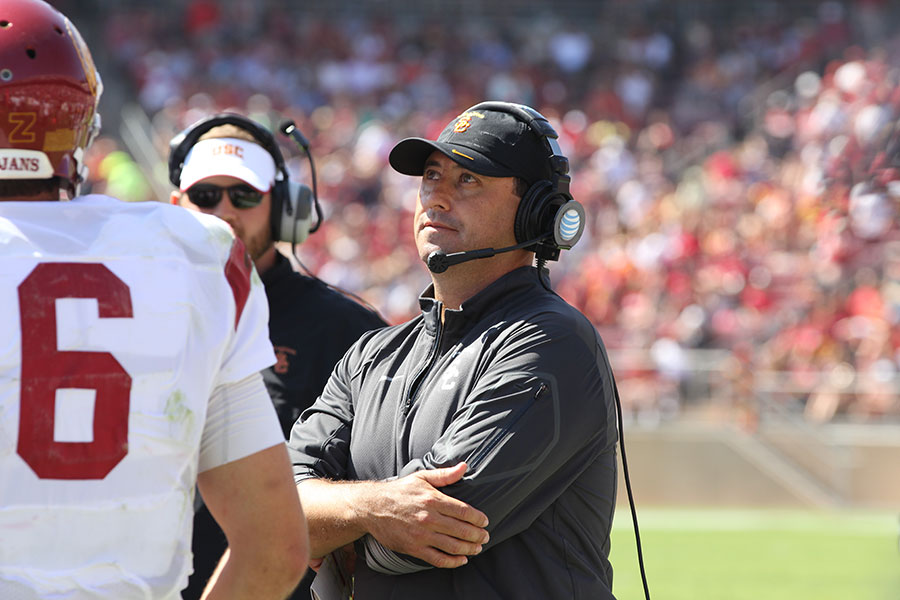 Saturday’s loss to Boston College marked a big bump in the road for the Trojans’ national championship hopes. Daily Trojan columnists Luke Holthouse and Jake Davidson join Daily Trojan sports editors Aubrey Kragen and Will Hanley to discuss the implications of the Trojans’ unexpected defeat at the hands of the Eagles. What went wrong for the Trojans in Boston?

WH: It’s really easy to look at this loss and say it was just meant to happen. USC was playing 3,000 miles from home, 12 hours after its normal practice time on a slippery artificial surface. BC fans were slow to arrive but eventually packed the stadium, and the building was about as loud as it could get. The school honored two heroes —  Welles Crowther, “the man in the red bandana,” and Pete Frates, a former Eagles’ baseball player fighting ALS. It did make for quite the upset narrative that I’m sure BC fans will remember for decades to come. But there are realities here. USC could not move the ball on the ground. At all. Ever. Not once. This is a team that kept itself alive last week against the vaunted Stanford defense with a strong running game.

The Trojan defense looked mentally and physically slow, and eventually tired by the end of the contest. Cody Kessler, whose numbers looked great, had his moments, but for the most part was slow on his reads and checked down far too often. Even on special teams, USC looked utterly confounded by two consecutive squib kickoffs that pinned the team inside its own 20. To take nothing away from BC, it was a disastrous performance from the Trojans.

USC head coach Steve Sarkisian himself took the blame for the loss in a postgame press conference. How much of this game was affected by Sarkisian’s playcalling?

LH: I would not place that much blame on the play calling of Steve Sarkisian. Plenty on Twitter were asking for more pass plays given the feeble ground attack, but Sarkisian did call for 46 pass plays and only 29 rush attempts. Sarkisian needed to try to establish the running game to keep BC’s defense honest on potential deep balls. Not only that, but even when Sarkisian called for passes on big third downs, so many of them ended in sacks. Of the five sacks USC surrendered, all five came on third down, and four came in the second half. Add on the 37 points surrendered on defense, and I don’t think there’s that much else Sarkisian could have done.

JD: Sarkisian blew the game. Kessler could have torched that defense and vaulted himself into the Heisman conversation with a ruthlessly efficient 42-for-50, 450 yard and 6 TD game. As it is he completed close to 75 percent of his passes for three TD’s and 300 yards playing with a proverbial hand tied behind his back for three and a half quarters.

The Trojans were absolutely torched on defense, surrendering the most rushing yards in a single game in more than 26 years. Where did the defense falter specifically for the Trojans?

AK: First, I must say that BC quarterback Tyler Murphy was on another level on Saturday. Some of the best defenses in the country might not have been able to stop him — he was that fast. I also think BC just drew up a great gameplan. They were consistently able to get outside on us, which sophomore safety Su’a Cravens chalked up to miscommunication on the defense. Again, I don’t quite understand how the team didn’t fix that issue at halftime, but what do I know about reading an offensive scheme on defense?

WH: I never expected this to be a low-scoring game. Most teams struggle with the read-option, especially when they face it for the first time. If someone had told me before the game that the Eagles’ would score between 20 and 30 points and that Murphy would pick up over 100 yards on the ground, I would’ve been disappointed, but not surprised.

The basic goal of a spread offense amounts to a two-step process: First, spread the defense out with screen passes and read-option/sweep runs, and secondly, exploit the holes in the middle of the newly stretched out defense with inside runs and deeper passes.

That’s how Oregon has pummeled USC — and most of the country — in the past few years. The funny thing about this game, however, was that BC never had to get past step one. Murphy and his backs ran horizontally to stretch out the Trojan defense, and then just ran right around that defense when it couldn’t contain anyone. It was just a game of “beat me to the edge” that Murphy won literally every time.

It might be a little too early to say, but what are your projections for this team moving forward?

AK: As we saw at Stanford, USC has the stuff to hang with some of the best teams in the country. But we also showed our weaknesses this weekend. We might have a bit of a Jekyll and Hyde team this year, showing up in big games and losing seemingly easy ones. I think how the squad comes out against Oregon State will tell us what kind of team this is going to be.

LH: I think the loss is more indicative of problems to come than significant in and of itself. It’s out of conference so USC could still finish the year undefeated and guarantee a spot in the Pac-12 championship game. If the Trojans could beat an unbeaten Oregon team in that game along with wins at Notre Dame and UCLA along the way, I would be shocked if the team didn’t make the four-team national championship playoff. But that scenario looks particularly unlikely after this week. No one besides Oregon has really impressed me in the conference so far, so I wouldn’t be surprised if USC still won the South division, but that’s totally up in the air. Even if USC got there, it looks like the Ducks would run all over the USC defense in a potential Pac-12 title game. The most interesting stat of the night I think is that USC won the turnover margin — the Trojan defense forced one interception but the Trojan offense had neither a fumble or a pick — and still lost. This wasn’t some fluke performance; USC straight up got outplayed by a team that I didn’t think belonged on the same field.