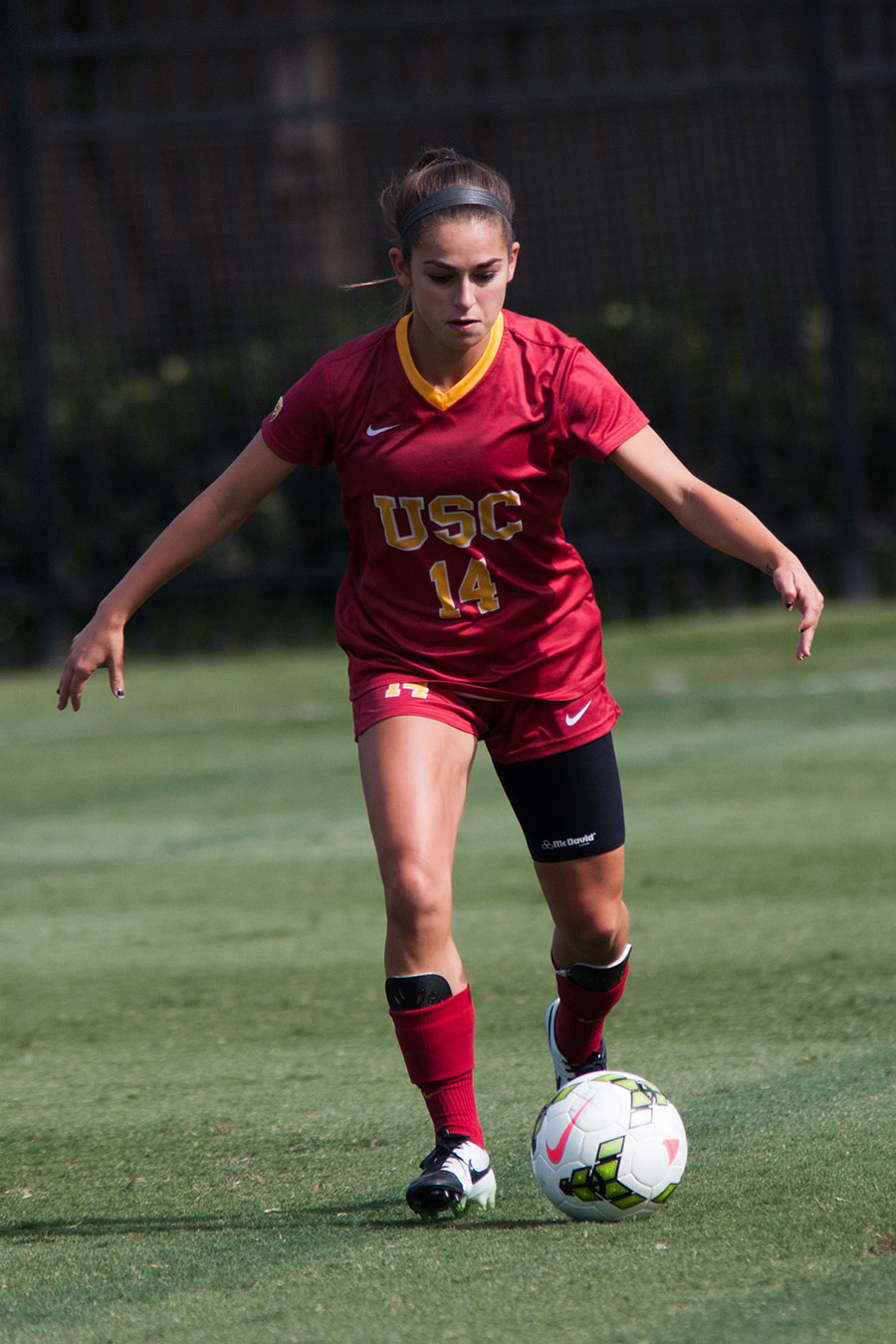 After defeating Arizona 3-0 on the road in their Pac-12 Conference opener on Sept. 26, the USC women’s soccer team returned home this weekend looking to keep the ball rolling against Colorado and Utah. Setting the table · Junior midfielder Reilly Parker set up one of the Women of Troy’s two goals against Utah with a beautiful corner kick. – Brian Ji | Daily Trojan

The lone goal of the Friday’s game came off a surprising counterattack in the fifth minute initiated by a goal kick from Colorado’s Kate Scheele directly to forward Madison Krauser, who beat the defense and angled a shot perfectly past leaping USC senior goalkeeper Caroline Stanley. The early goal proved to be the difference, as the Women of Troy were unable to equalize during the next 85 minutes, despite four shots on goal and multiple attempts that just barely missed the crossbar.

As the first conference loss of the season for the Women of Troy, the defeat was disappointing, especially considering that the chances to win were certainly there.

“Friday was a bummer, not only because we lost and conceded a goal, but also because we gave up the goal early,” Stanley said. “After that game, we wanted to wash out the game and refocus our mentality.”

“All in all I actually thought we played pretty well,” McAlpine said. “We were just a half step off and didn’t quite find that extra gear when we needed it. Give credit to Colorado, they learned their lesson from their first conference loss and gritted their way through this game.”

With another matchup looming, there wasn’t much time to dwell on the loss. Clad in pink headbands and wristbands to raise breast cancer awareness, the Women of Troy put together 90 minutes of solid soccer and got past Utah on Sunday.

“We came out today and had an awesome game, especially defensively,” Stanley said. “We switched some things up and we played really solid. Today was a good win and a good shutout for the defense. Our forwards finished their chances as well. Overall, we took care of business … you can’t ask for much more than that.”

McAlpine was also pleased with his team’s performance.

“There was a definite difference between Friday’s game and [Sunday]’s game,” the first-year coach said. “In both games we were aggressive early, which I like to see, but today we were able to stick them in neck. We played with a ton of energy today and that is something this team is built to do. Utah wanted to play slow today but we wanted to speed the game up, and ultimately, we were able to do that.”

The defense was stout the entire game, as evidenced by the shutout, but even more comforting for USC fans were the team’s two goals. Senior midfielder Alex Quincey, who now has a team-leading nine on the season, scored both. She was close to putting a third away in the second half on a one-on-one with Utah goalkeeper Lindsey Luke, but her shot sailed just wide to the right.

“Obviously you need someone on the team to score in order to win, and today it just happened to be me,” Quincey said. “We were kinda bummed from losing against Colorado on Friday so it was great to come out today and get a win.”

Junior midfielder Reilly Parker, who soundly struck a first-half corner kick into the box that found Quincey’s head for the score, set one of Quincey’s goals up beautifully.

“Reilly [Parker] was great, she kicked the corner kick right to me, almost like she was serving it to me on a silver platter,” Quincey said. “All I had to do was just get a head on it, and luckily I did and finished the goal.”

McAlpine was also pleased to see the offense find its way once again, especially after the team made a point to spend time working on some offensive situations in between the two games.

“We didn’t capitalize Friday, so we spent a little time Saturday making sure we were in the right places and being a little more hungry in terms of our scoring attitude,” he said. “And even though there was a lot of offensive pressure, there are still a few places in which we need to improve.”

Even with improvements yet to be made, the team is confident that they are headed in the right direction. The win Sunday helps to numb the sting of defeat inflicted after the Colorado game and has the Women of Troy back on the right foot heading into a critical week of their season.

This Friday, they will square off against No. 12 Cal, followed by a matchup against No. 3-ranked Stanford on Sunday. Both games will be played at McAlister Field, and each will provide the Women of Troy with a huge opportunity to prove themselves against top-end competition. The team will look to build off of their bounce-back performance Sunday in order to prepare.

“Everybody is doing great right now, and the defense is making my life easy,” Stanley said. “The offense needed to focus on putting away some chances after Friday, and they did that. Both collectively and individually we focused on starting fast and applying pressure, because we knew that would be a key to winning the game. All 11 players did that today, and as you can see, we got it done.”