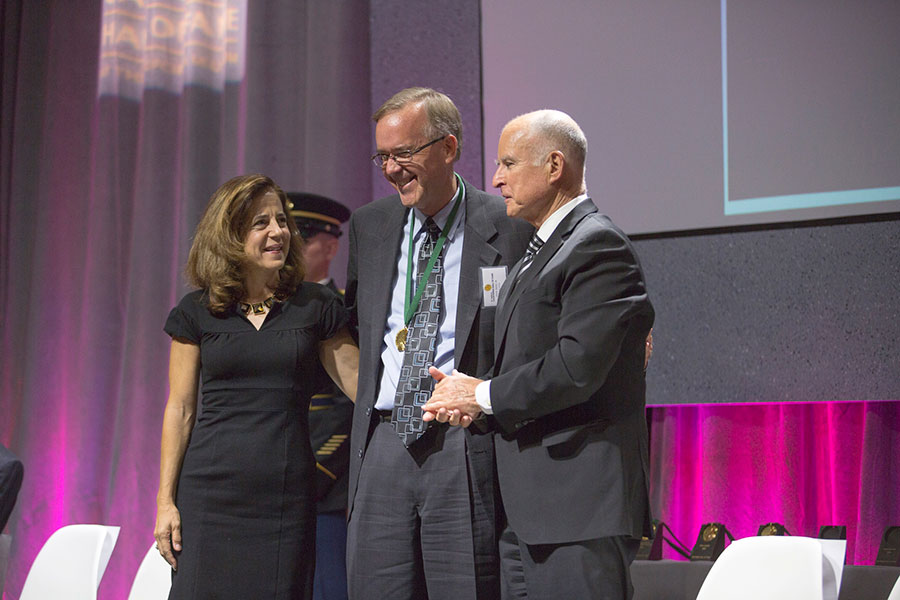 The late Fred Ross Sr., a USC alumnus and social justice advocate, was inducted into the California Hall of Fame at the California Museum in Sacramento on Oct. 1. Other honorees at the ceremony, which was the eighth such induction, included director Francis Ford Coppola, basketball player Kareem Abdul-Jabbar and musician and producer Andre “Dr. Dre” Young.

A less famous, yet equally impressive inductee, Fred Ross Sr., who passed away in 1992, was also recognized by California Gov. Jerry Brown. A grassroots organizer and champion of social justice, Ross dedicated his life to being in the background of more prominent activists.

Friends and family say that Ross’s humility kept him out of the press, but this lack of recognition does not reflect his influence on the world.

For him it wasn’t about glory or recognition,” said his son, Fred Ross Jr. “It’s extraordinary that Gov. Brown recognized him. He was probably one of the least known members of his class. He was behind the scenes. He was all about developing and he got tremendous satisfaction from doing it.”

After graduation, he took a job managing a California labor camp, where he took unprecedented initiative to organize workers in order to attain a higher degree of self-governance.

Voter registration and civic engagement became a cornerstone of Ross’ endeavors. In his later attempts to gain the trust of a skeptical César Chavez, Fred Ross Sr. would have to prove his passion and commitment. Ross painted a picture of hope for Chavez, citing his triumph with the Los Angeles City Council campaign in 1947. In organizing a massive voter registration operation and training thousands of grassroots organizers, Ross managed to register over 15,000 constituents. These efforts led to the election of Ed Roybal, the first Hispanic councilmember.

“It was his calling to devote himself to fighting injustice,” Ross Jr. said. “He believed the best way to do that was to organize people in underrepresented communities.”

Chavez eventually found confidence in Ross, whom he later called upon in founding the United Farm Workers Association. After he trained 2,000 community organizers, the group would go on to catalyze the 1975 California Agricultural Labor Relations Act by utilizing Ross’s strategies for successful activism.

These efforts faced myriad impediments because, though he flew under the radar, people could recognize that Ross Sr. was a force to be reckoned with. When spearheading the Civic Unity Leagues in the Citrus Belt around 1947, the activist was followed by the FBI, as he was confronting issues like police brutality and segregation, which profoundly plagued southern California. Despite opposition, reforms were enacted, and the movement managed to get the first Latino school board representative elected.

“In the aftermath of the Proposition 187, I remembered my father’s advice, No hay mal que por bien no venga,” Ross Jr. said. The phrase is a Spanish rendition of every cloud has a silver lining.

“I took that saying to heart,” Ross Jr. said. “As we did research, we found that in Los Angeles County alone, in 1994 there were a million legal residents. They were eligible to become voters and citizens. We came up with the Active Citizenship Campaign that taught people how to become citizens and become engaged in the community.”

Their patience and dedication achieved significant results. These new U.S. citizens were consequently able to vote in the 1996 elections and, being trained by Ross Sr., subsequently organized a march protesting the bureaucracy of Immigration and Naturalization Services.

Their endeavors were so successful that, after meeting with then Vice President Al Gore, the wait of citizenship applications got reduced from three years to six months — a standard still extant today. Ross Jr. continues to be inspired by his father’s actions in his own life.

“The fight for social and economic justice is a lifetime fight, and multigenerational fight,” he said. “You’re going to have setbacks.”

When asked about the greatest challenge his father faced, Ross Jr. asserted that it was inspiring a new generation of leaders to stay with it for the long haul.

”There are no shortcuts because they lead to dead ends,” he said.