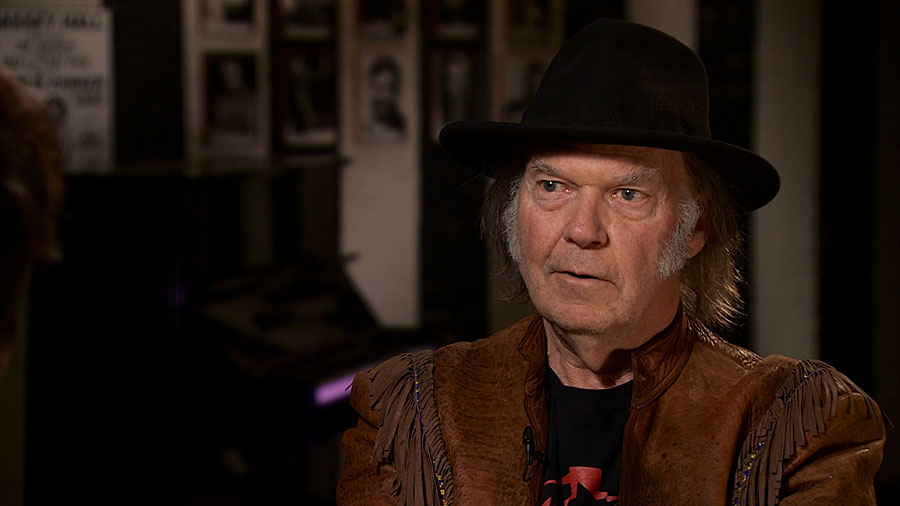 Neil Young is a legend of folk music, with a career that has spanned generations and a collection of hits unmatched in his field, and the singer and environmentalist has showed no signs of stopping — even at the age of 68. His newest album, Storytone, was recorded with a live orchestra accompanying each track, and the high-concept album is both beautiful and heartbreaking. Fighting on · Neil Young has been through a lot over the last year. He divorced Pegi, his wife of 36 years, he started a music company and finished his latest book. Through all this, he still managed to record his 35th album. – Photo courtesy of CBC

Some of the most well-known folk bands of all time included Neil Young in their ranks, and it is no coincidence that he is still making hits. From Buffalo Springfield to Crazy Horse to Crosby, Stills, Nash & Young, the artist has left an indelible mark on folk music, and he has kept up his blistering pace. Young just put out an album in the spring, entitled A Letter Home, and in addition to his own work, the folk singer has also worked on other artists’ albums, lending his guitar to a song on Chrissie Hynde’s Stockholm. Storytone is his 35th studio album, a number few artists will ever achieve, and although it has its flaws, it is still a benchmark of lasting musical talent.

His sound may have mellowed since the early days of Buffalo Springfield, but Young still has a lot of music left to create. On Storytone, the native Canadian opens up about his recent divorce and other poignant moments in his life thus far.

There are a couple tracks on the album that are seemingly about his divorce from wife Pegi, and they are all heartbreaking reminders of the pain that lost love evokes. “Like You Used To Do” is a ballad on how things used to be, and it could bring a tear to anyone’s eye, a common theme with Young’s songs.

In the last year, Young has been through a lot. He has successfully started a music company, Pono, which is dedicated to allowing listeners to experience their favorite songs in higher quality, finished his second book and begun the process of divorcing his wife of 36 years. Through all this, he has still managed to put out new music — something that is a feat in itself. On top of that, he recorded the whole thing both solo and with a live orchestra and big band, adding some backing instrumentals never heard before in Neil Young tracks. There are big band moments in songs and low violins in others, but all seem a little out of the blue for a veteran of the folk scene.

Storytone is certainly not Young’s best album, but he experiments with his sound in new ways, giving listeners a new take on the old, brooding vocals that made him famous. Unfortunately, his work with the big band simply falls flat. “Say Hello to Chicago” is a jazzy piece that sounds like a poor imitation of Sinatra rather than a bona fide Young original. It starts with trumpets that could’ve been directly stolen from “Theme from New York, New York,” and dives into a Chicago-style piece that works until Young lends his vocals to the track. Young’s iconic voice has been the center of a great deal of hits over the years, from solo tracks “Old Man” and “Heart of Gold” to Buffalo Springfield originals like “For What It’s Worth,” but they don’t fit the jazzy backings laid down in “Say Hello To Chicago.”

The orchestra too has issues, despite being arranged by Michael Bearden and Chris Walden, industry veterans who have worked with Lady Gaga and Michael Buble respectively, among others. One critic from Pitchfork called the arrangement “hollow, gilding the songs without adding any thoughtful counterpoint.” The orchestra plays, but adds nothing to Young’s music, and overall, it subtracts from his iconic voice.

It is refreshing though, to hear the deluxe version of the album, which features solo renditions of each song. They are slow, soft and heartfelt and feel much more in line with Young’s musical stylings. Armed only with a piano or guitar, each track is quiet and earnest, throwing back to an earlier sound listeners of Neil Young will be much more inclined to love. Suddenly “Say Hello to Chicago” feels much more familiar through Young’s voice. The big jazzy tune is now a soft, reflective piece on Young’s last visit to Chicago. The stripping of the orchestra forces a much more intimate interpretation of each song, and it truly brings out the best in Neil Young. There is something comforting in the dark, beaten voice Young has presented throughout the years, and it feels good to still hear him creating music in the same way.

Neil Young will always be a legend of folk music, but his experiments in composition on Storytone do not accent his vocal style and ultimately subtract from his work.

Matt Burke is a sophomore majoring in film production. His column, “Notes on Notes,” runs Thursdays.

Nootbaar uses baseball ability to give back