Orgeron still has a place at USC 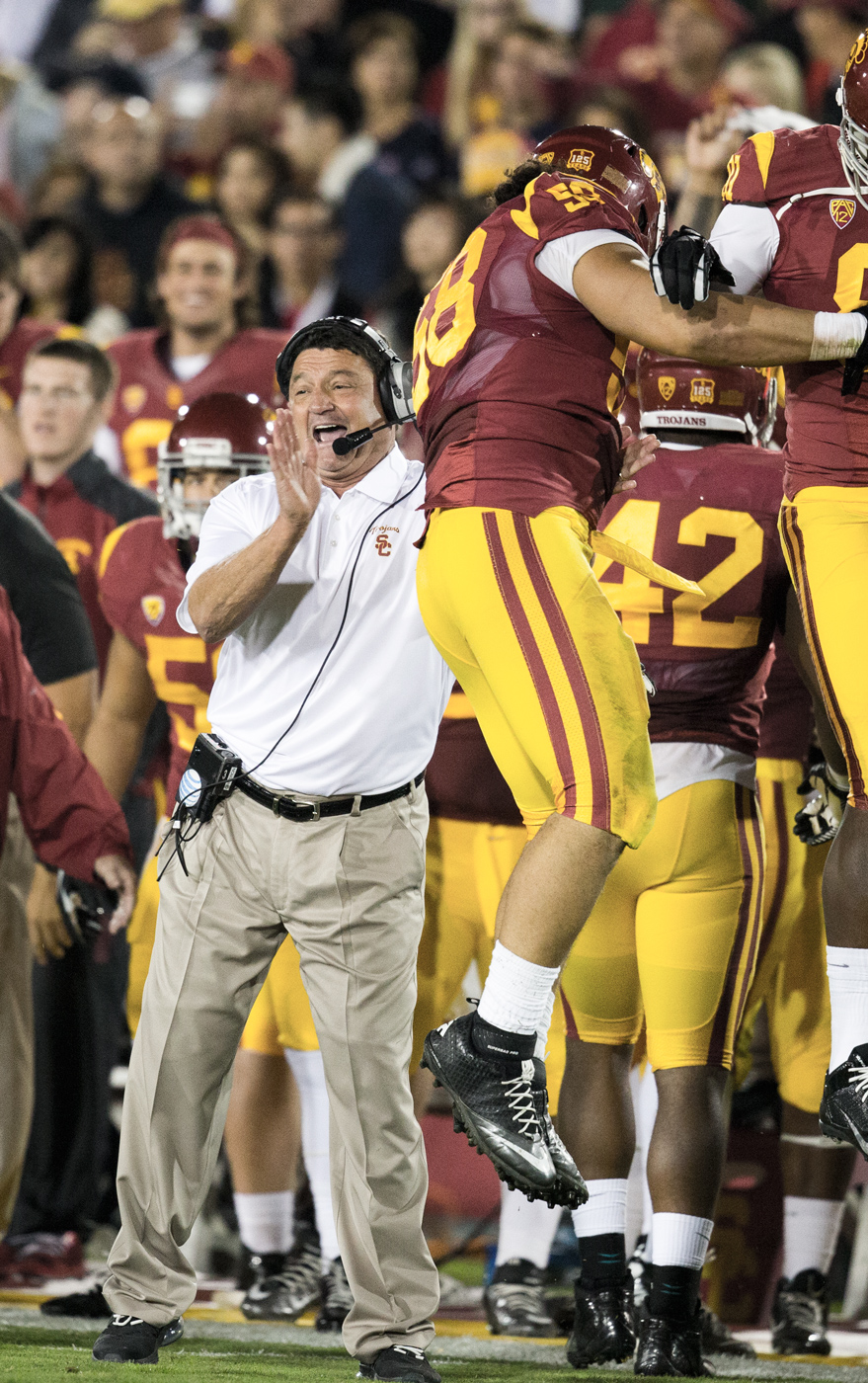 Ed Orgeron wants to come back. After spending what felt like an eternity off the grid with his family in his Mandeville, Louisiana, home, the former interim head coach of USC football expressed to Bill Plaschke of the L.A. Times that he was open to the prospect of rejoining the Trojan family. O-face · Ed Orgeron led USC to a 6-2 record, including an upset win over then-No. 5 Stanford, while serving as interim head coach in 2013. – Ralf Cheung | Daily Trojan

In a column that was absolutely worth all 1,760 words of reading, Plaschke described Orgeron’s chicken and Cajun boudin sausage gumbo in painstaking detail while recapping the beloved coach’s eight-game tenure as the gravelly voiced general of the USC football team. I’m sure most Trojan fans know by now: “Coach O,” as fans affectionately took to calling him, went 6-2 with an unforgettable win over Stanford, but two forgettable showings against USC’s two most important opponents.

In the interest of full disclosure, Bill Plaschke is one of the reasons I’m even writing about sports right now. My favorite Around the Horn analyst was also incredibly charitable to Orgeron in his piece. The possibility of Orgeron’s return sounds great on paper, but it’s difficult to envision a Trojan squad that would remain undivided after bringing back a former head coach. Installing Orgeron as an assistant, however, could prove far more beneficial than not. The former coach’s value as a potential recruiter and all-around chemistry builder is undeniable.

Italian Renaissance political philosopher Niccolo Machiavelli once pondered if it was better for a leader to be feared or loved. With a combination of Sarkisian and Orgeron, the USC coaching staff can be both. One of the main issues with Sarkisian’s players this semester has been a lack of discipline — USC’s aggressive play has come with a significant amount of penalties, many of the committed by the team’s youngest players.

The 2013 squad, largely under Orgeron, committed 6.8 penalties a game. This year’s team is committing 8.7 penalties per game, a full on two penalty-per-game increase. This is due in part to the younger players getting significant playing time, but also a general lack of discipline across the field. Orgeron’s fatherly persona off the field belies a disciplinarian approach in practices — something that can serve to reinforce Sarkisian’s current regime. But it’s not just the penalties: it’s the lack of emotion from the players this season. As coaching styles go, Sarkisian seems far more like Lane Kiffin than the emotional Orgeron.

This football team needs an emotional shot in the arm, it needs guidance at the underclassman level, and it needs stronger discipline. Ed Orgeron can bring those things and reinforce these concepts, and having Sarkisian and Orgeron bounce off each other as head coach and assistant will be the closest thing to piecing the old Pete Carroll era back together.

Plaschke’s column will reflect the sentiments of most of the Trojan faithful because, despite the losses to Notre Dame and UCLA, Orgeron captured the spirit and the heart of USC. No coach better encapsulated the feeling of unity and family, those all-important Trojan values that seem to fade slightly with each effort to improve the school’s U.S. News and & World Report ranking.

Last season was a magical ride, but there was something to it that was very real. That thinned-out Trojan roster played out of its mind, that’s what made the victory over Stanford so special. For the people who came out to that game, there was a feeling of real, collective solidarity. There were all classes represented, different nationalities, different majors, different student organizations, but one USC football team. Rushing the field was one of the truest manifestations of what it meant to be a part of the Trojan Family.

Pragmatists and pundits will point to any number of reasons as to why Orgeron shouldn’t be allowed back. The biggest bone to pick will be that Orgeron failed to beat Notre Dame or UCLA. I understand that part of being a Trojan is having high expectations. More important than that, though, is having high standards for ourselves in our respective fields of work — to represent this great university by playing our hearts out and buying into the concept of the Trojan Family.

To rephrase Machiavelli’s dilemma, is it more important for a coach to get his team to beat UCLA every year or to play the game like true Trojans? I’d argue that though both are nice, the latter is far more important. If there’s even a chance of bringing that passion and “one Team, one Heartbeat” mindset back to USC’s players, then Ed Orgeron is worth more than a look for an assistant coaching role.

Ed Orgeron told Plaschke that USC is his “family forever.” I couldn’t be more proud that he’s a part of it. Coach O’s coaching philosophy embodied one line from another prominent sportswriter, Grantland Rice:

“For when the One Great Scorer comes

To mark against your name,

He writes – not that you won or lost –

But How you played the Game.”

Euno Lee is a senior majoring in English literature. He is also the editor-in-chief of the Daily Trojan. His column, “Euno What Time It Is,” runs Tuesdays.