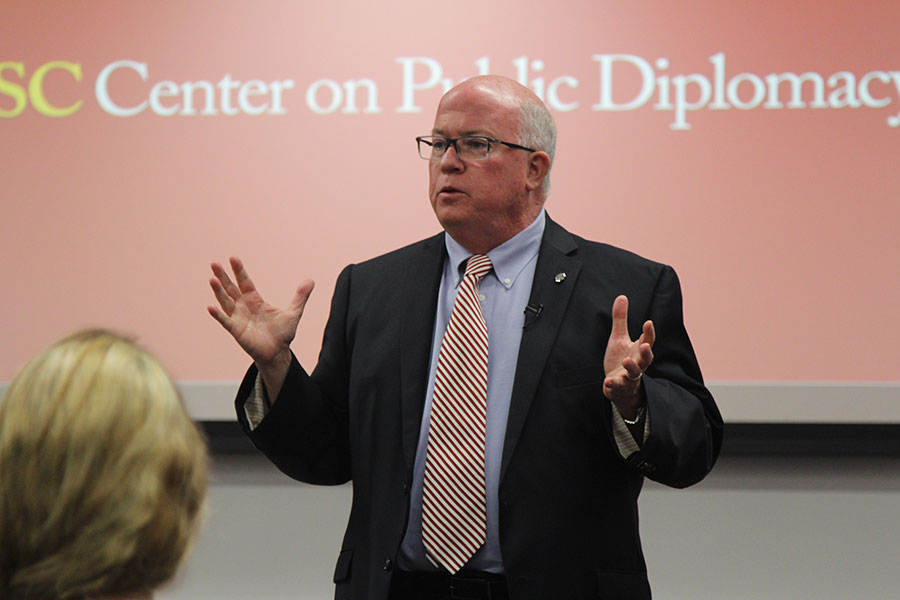 On Thursday night, the USC Center on Public Diplomacy hosted “Out Abroad: LGBT, Public Diplomacy and Global Rights,” a reception and discussion on the complex and evolving discourse of homosexuality in diplomatic relations.

The event, which was held in Wallis Annenberg Hall from 5 p.m. to 7 p.m., was co-sponsored by the USC LGBT Resource Center. It consisted of speeches from three guest speakers that preceded a panel moderated by the center’s director, Rev. Kelby Harrison. Patrick J. Linehan, CPD Public Diplomat in Residence and Former Consul General at the U.S. Consulate General in Osaka-Kobe, Japan, spoke of his early experiences working for the state department as a gay man.

“When I joined the state department in 1984, the commissioner there said, ‘There’s no room for homos in the department. If you’re queer, you’re out,’” Linehan said. “There were no gays and by that I mean no one talked about it because you would lose your job.”

Linehan affirms the United States has made remarkable progress in recent years; when he met his husband, Emerson, in 2002, no state permitted gay marriage. The nation, however, remains somewhere in the middle on the spectrum of countries in support and resistance of LGBT rights.

“We recognize on the one hand there are countries way ahead of us, like Sweden and the Netherlands,” Linehan said. “On the other extreme in places like Uganda and Russia, we have people who could be put to death or imprisoned simply for being gay. Nationally, and with the world as a whole, we still have a long, long way to go.”

Douglas Janoff, Senior, Canadian diplomat and diplomat in residence at the University of Kentucky, presented his findings on homophobic violence across the world and how organizations like the United Nations and the Council of Europe are responding.

“My research focuses on how LGBT discourse has arisen in these human rights forums and what that tells us about attitudes around the world,” Janoff said.

Janoff cited various countries’ support or rejection of resolution 17/19 “Human rights, sexual orientation, and gender identity” of the Human Rights Council and how they reflected regional trends. While almost all European states supported the resolution, hardly any African nations or predominantly Muslim states were in favor of it.

Janoff described how individuals around the world find it difficult to reach out to others and advocate for their rights, particularly in countries where human rights are so severely suppressed.

“It can be a lonely life, very isolating, when everyone around you is in a social pattern not accustomed to homosexuality,” Janoff said. “You have to be strong within yourself.”

Monica Trasandes, director of Spanish-Language and Latino Media for GLAAD, addressed the issue of LGBT rights in Latin America as it is portrayed in the media.

“There’s been a real problem acknowledging LGBT rights in Latin America since many parts are very evangelical and religious,” Trasandes said.

In the final panel, all three speakers made remarks about LGBT rights in the international community moving forward.

Trasandes hopes to instill the idea of coexistence between faith and support for LGBT rights in Latin America.

“Whenever I speak to people who insist to me their faith really tells them homosexuality is a sin, I just tell them that I know lots of people who are devoutly Catholic who do not see faith and supporting homosexuality as an either-or situation,” Trasandes said.

From the perspective of the role of the United States, Linehan emphasizes equality as a whole in any diplomatic activity.

“As a diplomat, it is my job to advocate on U.S. policy,” Linehan said. “Our government advocates for human rights and that everyone should be treated equally.”