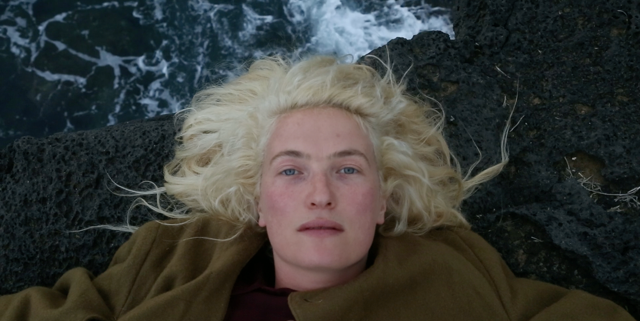 Experiencing Lita Albuquerque’s 20/20: Accelerando is like swallowing the vastness of the universe. 20/20: Accelerando, now on display at the USC Fisher Museum of Art, is a 26-minute video projection accompanied by a score and narration. Performers who dance and vocalize alongside the projection are interspersed among attendees, who find themselves meeting each other’s awestruck eyes as they scan between the performers and video projection.

The video follows an astronaut wrecked on an uncanny world as she journeys to learn the sacred wisdom of its indigenous people and unravels the secret geometry of the earth. The film is rich with astounding images of the natural world, a staple of Albuquerque’s style, augmented by a thundering soundtrack and narration in both English and a (subtitled) alien language, presumably of the artist’s creation. At climactic moments, the performers, two or three to a room, join in chorus to punctuate the soundtrack or break out in emotionally-charged laments in the unknown language. Their carefully choreographed motions allow the drama on-screen to penetrate the audience. That, combined with the deep, rolling bass of the film’s score, generates a hyper-lucid sensation akin to seeing a new color or acquiring a new sense.

The principle artist, Lita Albuquerque, is a Los Angeles-based creator known most recently for ephemeral works in the extreme parts of the world, including both the North and South Poles. She is on faculty at the Art Center College of Design in Pasadena. In an interview with Art Forum, Albuquerque noted that the installation is based on a 2003 piece she wrote in which a 25th century female astronaut lands in 6000 BCE Mali. Though the scenes displayed in 20/20: Accelerando appear to be real images of Earth, visitors to the installation are not offered a straightforward explanation of the actual site of the astronaut’s crash. Rather, in this exhibition, the artist invites viewers to witness the protagonist as an intrepid explorer of an uncanny almost-Earth who is to restore a forgotten memory of its ideal state, a mission cast as one of both heroism and personal enlightenment.

20/20: Accelerando imagines time and space in elliptical fragments; viewers are forced to surrender to an alternate geometry of reality in order to comprehend this new world. Rather than indict conventional spatial reckoning, Albuquerque’s installation transcends it. She invites viewers to turn not their world views but themselves upside down in order to make sense of a chaos that confounds intuition. Watching 20/20: Accelerando is like discovering how to close one’s eyes in order to better hear. The projection consumes a full, double-high wall of the gallery and the soundtrack is almost overwhelmingly loud, providing the senses with a cleansing inundation that recalls the first bite of cool water when swimming in the summer.

Though its artistic merit receives priority over its political significance, the installation’s use of generic native cultural tropes to encourage an enlightened return to nature might generate controversy. The protagonist learns indigenous wisdom from a local “medicine man” who instructs her by drawing in the sand and on the soles of her feet. (Both characters are white.) The performers’ voices begin as incantational whispers and rise to cathartic wails that recall the Na’vi war cries of the 2009 film Avatar. Attendees might register occasional discomfort during scenes when the idiosyncrasies of the fictional culture constructed by the exhibition eclipse its narrative.

Perhaps a more central thrust of 20/20: Accelerando is its conservationist message. The film collapses the history of Earth and the universe in order to pointedly portray the exceptionality of the present historical moment. Albuquerque presents modernity as a departure from, rather than a welcome outgrowth of, a past era in which humans lived harmoniously with all matter on Earth. Her installation challenges the modern insistence on technological “acceleration” beyond the natural pace of the evolution of life. Rather, the exhibition suggests, humans should allow the pre-technological elegance and brilliance of nature to guide social progress. In this light, 20/20: Accelerando is a delightful continuation of the Fisher Museum’s environmentalist tenor that began with last fall’s Gyre: The Plastic Ocean.

20/20: Accelerando is on display at the USC Fisher Museum of Art until April 10. The gallery is free to all patrons and open on all afternoons except Sunday and Monday. The installation’s relatively loud volume and mild on-screen nudity might make it unsuitable for children.