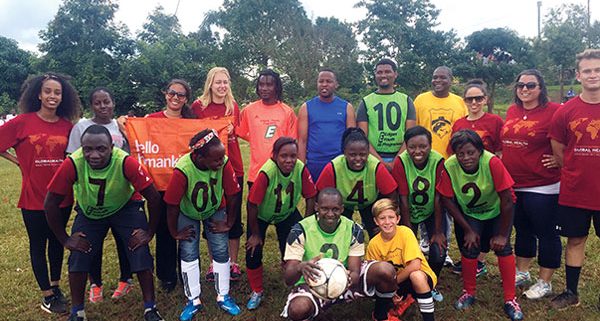 Approximately eight USC graduate and undergraduate students traveled to a Ugandan camp for a week this summer to educate children living in rural areas about health and well-being through the universal language of soccer.

The camp was located outside of the capital city of Kampala in a small farming town called Mpigi. Heather Wipfli, associate director of the USC Institute for Global Health, has been running operations there for the past several years with the help of her 13-year-old son, who decided to start the nonprofit Ray United FC foundation to fund a soccer tournament for the children.

USC students partnered with medical students at Makerere University in Uganda to teach wellness to 1,200 children aged 9 to 15 from 40 different schools in the Mpigi area. They also put packets together for teachers to continue their wellness education after the conclusion of the camp.

The children spent half of their time in the classroom and the other half of their time on the soccer field competing with each other. Ray United FC brought in professional soccer coaches to train the children, provided the equipment for the games and hosted a tournament throughout the week.

In the classroom, USC and Makerere students taught children about non-communicable diseases, prevention of malaria, social issues, environmental health, tobacco and alcohol and HIV and sexual health, among other topics.

Kristin Bessie, who taught at the camp in 2015 to complete her Masters of Public Health, said that combining teaching with a sport that everyone loves is productive and helps the children stay focused.

“The kids are all really excited to be able to get out on the field and play,” Bessie said. “They’re also really engaged in the classroom.”

The partnership with Makerere University made acclimating to the culture at Mpigi easier for USC students.

“Their English is not the same English as ours, they look different and feel very foreign to the [USC] kids and the community,” Wipfli said. “I felt like we needed a way to gain better access to the community, and that’s why I reached out to the local university in Uganda.”

After the camp, students enjoyed a typical African safari. They also stayed for a second week to tour clinics and the national referral hospital in the Ugandan health system.

Wipfli said that volunteers and participants alike benefitted from attending the camp. The Ugandan children left with tools they could use to maintain their health and the USC students were immersed in their field of interest.

“Students have the ability to form relationships and partnerships with communities and gain access to communities in a way that they couldn’t through vacation or other volunteer opportunities,” Wipfli said.

Bessie said that participating in this summer program was worthwhile, especially in her area of expertise.

“It was a really rewarding experience,” Bessie said. “It was a great application of all the skills that you acquire during the Masters of Public Health Program.”

In addition to continuing and strengthening the volunteer opportunities at the Mpigi location, Wipfli is working on expanding to Mozambique and offering the program as an alternative spring break to USC students.