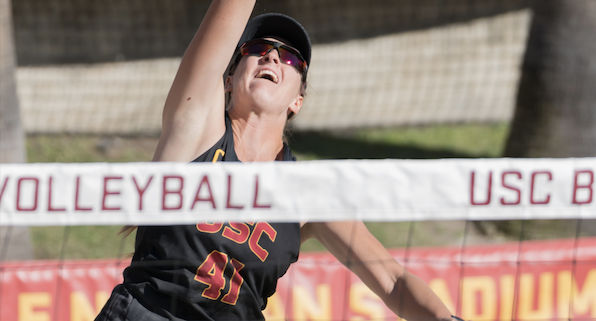 No. 2 USC is preparing to host the Pac-12 Tournament beginning Thursday. USC trails behind only UCLA in the Pac-12 and will face off against Washington at home in the first round.

The Trojans concluded their regular season last Thursday with two victories over Grand Canyon University and Cal Poly on Senior Day. The team showcased strong play in these final matchups, winning both by a score of 4-1. With these victories, the Trojans completed an eight-game winning streak to cap off another strong regular season record of 24-4.

Senior Abril Bustamante and sophomore Tina Graudina were both steady forces for the Trojans at the top court as they finished with a commanding 26-2 match record for the season. Graduate student Alexandra Poletto and sophomore Haley Hallgren matched them with a 26-2 record of their own. Both of these duos are trending upward at the right time as well, having won their last eight matches.

“We all changed our mindset [toward the end of the season],” Hallgren said. “We each focused on our own individual court, which eventually led to team wins.”

The Trojans last played the Huskies in the Pac-12 North Invitational and defeated them 5-0. Many of the sets were decided by large margins, and USC was especially successful at the top two positions. The Huskies finished their season with an 8-14 record and earned the seventh seed in the tournament. They are 2-4 in their last six games, and the Trojans hope to capitalize on this favorable matchup.

“The beginning of the season matters, but it is all about the end,” Hallgren said. “[We] want to be the last team to get the win.”

If USC defeats Washington, it  will then face the winner of the Cal-Arizona State game Thursday. Cal is currently the higher ranked seed, and they defeated the Sun Devils 5-0 in their only matchup this season.

USC will take on the Huskies to kick off the Pac-12 Tournament  at Merle Norman Stadium at 3 p.m. Thursday.