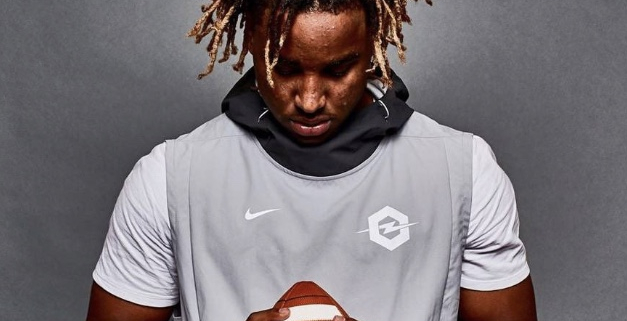 USC got its man — and then some.

Saturday’s All-American Bowl Declaration Show on NBC was filled with good news for the Trojans: Five-star defensive end Korey Foreman, the nation’s top overall recruit in the Class of 2021, announced his commitment to USC, and four-star Ceyair Wright, the No. 6 cornerback and No. 77 overall 2021 recruit, joins him in USC’s incoming class. The Trojans’ class entered the day ranked No. 14 in the country and shot up to No. 8 after the two announcements.

Foreman had long been USC’s top target. The Corona, Calif. native initially committed to Clemson in January 2020, but USC kept up its recruiting efforts while instituting significant turnover of the defensive coaching staff. Foreman decommitted in April, a decision that reportedly stemmed from Clemson’s policy prohibiting players from taking official visits to other schools once they’d already committed to the Tigers.

The five-star’s top five included Arizona State, LSU and Georgia along with USC and Clemson, but it was believed a two-team race between the latter two, with the Trojans taking the majority of 247Sports’ Crystal Ball projections.

Foreman, who 247Sports pegs as its No. 12 all-time recruit, initially signed with the Trojans on Dec. 16 but kept his commitment under wraps until Saturday’s broadcast.

“I weighed everything possible, I dotted all my I’s and crossed my T’s,” Foreman said on NBC’s declaration show. “The coaching staff at ’SC, I’m blessed to be under them and I’m thankful for everything else that they have brought to me. And I’m blessed to see what journey has to come with this. And, yeah, it’s Fight On. It’s Fight On.”

The 6-foot-4, 265-pound edge rusher is known for his athleticism and explosiveness, with his elite agility helping him pick up five sacks through eight games in his junior year of high school. Foreman trained with Winner Circle Athletics after his senior season was canceled by the coronavirus pandemic.

Wright, a two-sport standout athlete in high school who ran a blazing 10.84 in the 100-meter dash, brings top-notch speed to the Coliseum. Wright has earned high praise for his long frame, awareness and ability in press coverage. He’s also known for his ability to close on the ball, though his 6-foot-1, 175-pound build has created questions about his physicality at the next level.

“[Philadelphia Eagles cornerback] Darius Slay is somebody that I can model myself after,” Wright said on the broadcast Saturday. “We have the same build, he’s around the same height as me, same weight — stuff like that. He’s great with technique and I think that I try to emulate myself after him.”

His top seven consisted of Arizona State, Michigan, Nebraska, Notre Dame, Oregon and Stanford along with USC, but the Trojans were squarely at the top of the L.A. native’s Crystal Ball prediction.

Off the football field, Wright has a strong interest in acting, which offered another incentive for him to stay in the bright lights of L.A. Wright, who cited Will Smith as his role model on the screen, starred in “Space Jam 2” as LeBron James’ son and has previously worked on television shows as well.

“Acting is something I’ve been doing for a long time,” Wright said. “I feel like L.A. is the best place to do it, so staying home is the move for me.”

Wright will help recharge a secondary that has already lost NFL Draft declarees in safety Talanoa Hufanga and cornerback Olaijah Griffin, who may be joined soon by redshirt junior safety Isaiah Pola-Mao. Wright, along with recent transfer and former four-star safety Xavion Alford, will play a significant role in reinvigorating the unit.

The work is not done for USC in rounding out its 2021 class. The Trojans are seen as the favorites to land the nation’s No. 45 recruit and No. 4 outside linebacker Raesjon Davis, a former LSU commit who went to Mater Dei High School in Santa Ana, Calif.

With or without Davis, though, the Trojans’ future undoubtedly got brighter Saturday.

“Me and Ceyair, we talk from time to time. He’s my guy. I’ll call him after this,” Foreman said. “Go Trojans.”