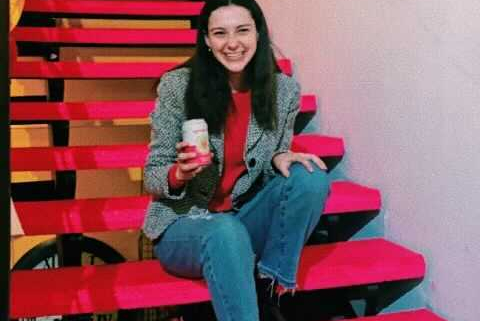 Last year, Alex Zarchy found herself stressed out from running the social media accounts of two organizations. She was spreading herself thin by writing and strategizing social posts and asking favors from friends to assist her with graphics.

Zarchy, a sophomore majoring in public relations and nongovernmental organizations and social change, realized she could turn her self-described “one-woman PR firm” into an organization of her own, and she did just that. Two Cents Public Relations, a firm dedicated to helping socially conscious businesses, nonprofits and artists, was launched February 6.

According to Zarchy, what makes Two Cents different from other PR firms is that it is run solely by 15 USC students with different majors and talents brought on by Zarchy herself.

“None of us have graduated college or gone to grad school, so we’re creating content that we’re not being taught,” Zarchy said. “We are kind of coming up with it ourselves and reinventing what public relations looks like.”

One of the peers Zarchy invited onto the Two Cents team is Trinity Lee, a sophomore majoring in art history and law, history and culture. While originally set to be a writer for the organization, as time progressed, Lee found herself in the graphic design and event planning teams as well.

Though Lee never thought she would find herself writing press releases or designing graphics for organizations, Two Cents pushed her out of her comfort zone and gave her the confidence to try her hand at new things.

“Something that [Zarchy] wanted was for us to experience different things, and if there’s something we were interested in that we wanted to try, to try it,” Lee said. “We’ve been kind of dabbling in a lot of different areas of what we do.”

The team’s work focuses on the change they believe their generation, Gen Z, wants to see. Before working with the socially conscious organization or a person of their choosing, criteria must be met.

“Our mission is pretty much formed by all of us. We’re all taking part in putting together what we want to do and what we want to accomplish,” Lee said. “A big part of that is uplifting, empowering and broadcasting really important work; the things that we believe should be seen and should be exalted, that isn’t as of right now.”

The term “socially conscious” has become a buzzword of sorts that has been slapped onto many brand identities but, in most cases, isn’t actively defined. For Zarchy, it was important to define that term and create something that reflected everyone’s values at the organization.

“Socially conscious businesses for us promote your creative expression, contribute to a social cause — monetarily or through direct action — lift up community voices fighting for social justice [and] have sustainable output and ethically sourced materials,” Zarchy said.

These different entities that are uplifted through Two Cents are represented in the traditional sense with promotion including social media graphics, but Zarchy also made it a priority to foster collaboration within their partnerships.

Zarchy said she wants Two Cents to bridge the gap between different entities depending on what their goals are. For example, if a restaurant is looking to garner more attention, the Two Cents team could connect them to an artist and commission a mural; if a nonprofit needed a place to hold a banquet, Two Cents could point them toward a small restaurant they are working with.

While social consciousness is a factor in the selection process for Two Cents, fitting the criteria doesn’t give businesses the firm’s stamp of approval right away. The organization has weekly Monday meetings dedicated to deeply understanding their potential clients and how their missions would be complementary.

Before getting into the nitty-gritty of each meeting, though, the team goes around sharing their “happy crappies,” where each person shares something great and something not-so-great about their day. Once the ice is broken, it’s on to business.

When potential representees come into a meeting, the team seeks to become more knowledgeable on who they may represent, so they ask questions about what goals the business may have or what their priorities are. This is then often followed by a pitch put together by the collective.

“[We want to know] why do you want our services? What are your goals?” Lee said. “And that’s followed up with a pitch … [we] give you based on what each of our teams has identified as ways that we can provide our services for each of your goals and what our signature Two Cents touch would look like for your organization.”

Currently, there are three organizations that have made it through this selection process. They act as case studies for the student-run organization to make sure that Two Cents is equipped to continue and further expand their future ventures.

In the beginning, each case study would get three months of free services from Two Cents in exchange for access to their analytics and the income that came into their business. The first business to sign on to Zarchy’s ambitious proposal was the Black-owned Hot & Cool Cafe, which serves healthy food options and acts as a community hub in Leimert Park, a Los Angeles neighborhood.

Last year, Zarchy worked with a formerly incarcerated man named Tobias, whose sentence was commuted from a life without parole sentence and was later hired by the only place that would hire him — Hot and Cool Cafe. Zarchy and Tobias would meet at the cafe every Monday at 2:30 p.m. without fail.

After discussing her idea of a student-run PR organization with Tobias at one of their weekly coffee meetings, he suggested that she propose the idea to the cafe’s owner, Tony Jolly. As soon as Jolly heard Zarchy’s plan, he was all in.

In the short time Two Cents has been around, the firm was able to completely reinvent the way Hot & Cool was presented on social media platforms such as Instagram.

“Our digital footprint increased dramatically. We were able to put strong content on our social media pages,” Jolly said. “That was well-received by all ages. [Two Cents] went above and beyond by adding certain videography to the content by interviewing me and interviewing employees.”

All of the posts on Hot & Cool Cafe’s Instagram are now more cohesive and give audiences a sneak peek into the lives of those who make the cafe what it is. Other than the addition of interview snippets and photos of food on the cafe’s Instagram page, Two Cents also connected a local artist to Hot & Cool to have merchandise designed.

It implemented changes that have given the cafe the step up that Jolly had never imagined, all done by a group of college students.

“They set a precedent [for] our image, and I couldn’t duplicate it. It’s like our image belongs to Two Cents now,” Jolly said. “So, I gotta do whatever it takes to keep them around. I forget they’re college students. I thought I was working with a marketing agency at one point.”

Other than Hot & Cool, Zarchy is in the process of integrating two more case studies in her team’s workflow. One of them is with artist Willie Baronet, who has a nonprofit called “We Are All Homeless,” where he buys homeless signs from people on the streets and uses them for large art installations.

The last case study Zarchy is really pushing for is to represent someone pro bono and find someone that fits their mission.

As time progresses, Zarchy wants to make sure that Two Cents remains authentic to its mission and doesn’t become the stereotypical dishonest mega-corporation that many on the outside view public relations as.

“There is so much mistrust with PR firms. There’s such a reputation of over-exaggerating the truth,” Zarchy said. “I want people from all walks of life to be able to come in and [know] the story that’s going to be put out there is [their] narrative. [I want them to say], ‘I am paying this person to be as authentically true to myself and the story that I want to share.’”

While Zarchy has crafted fun photoshoots and created events for socially conscious businesses, Two Cents is much more to her than what some would see as a college project. She hopes that the work she has begun expands and lasts a lifetime.

“I’ve been telling every single person that entered [our] space [that] this is not just a fun college startup for me,” Zarchy said. “If I get to tell stories about people who I care about, and people who I believe in for the rest of my life, … then that’s what I get to do with my life.”