Getty Center recovers and redefines the past and present 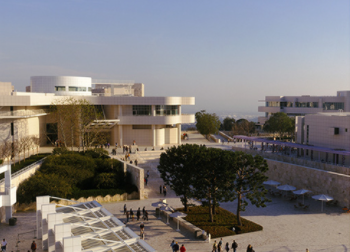 The Getty Museum is home to a collection of Roman, Greek, Etruscan and European art including paintings, sculptures, drawings, manuscripts, decorative arts and photography dating from as early as the Middle Ages to modern day.

The “Artists as Collectors” exhibit allowed museum attendees to step into the shoes of famous European painters such as Jonathan Richardson, Sir Thomas Lawrence and Joshua Reynolds who cherished a number of extraordinary drafts from Agostino Caracci, Girolamo Muziano, Delacroix, Raphael, Rembrandt and other prominent artists.

The collection consisted of the featured painters’ favorite pieces, varying from landscapes and depictions of biblical scenes to human profiles in mediums of ink, graphite, watercolor and chalk.

One illustration titled “A Group of Shepherds, and Other Studies” was an example of the artist practicing sketches — seen in the amount of side profiles of faces without bodies. The former owner, English painter Sir Thomas Lawrence, revered drawings as a great example to develop technical skills.

To these artists, their collections “were valued as intellectual property, powerful status symbols and works of art in their own right,” according to the exhibition’s web page. Preserving these copies was a sign of good taste, a way to study individual inspiration and simple appreciation of their work.

Overall, the exhibit was a testament to the artists’ love of their craft. It revealed some artists’ humanity and passion that are easy to forget in the face of their overwhelming talent; however, the lack of color could have come across as either intriguing or dull to visitors.

“Paolo Veneziano: Art and Devotion in 14th-Century Venice” showcases the Venetian painter’s works, varying in panels of altarpiece ensembles, triptychs and frames. During one of the most historically prosperous times in his country, Paolo Veneziano was known as a prominent personality.

Experts intentionally rearranged the panels in the exhibition to set the energy of a late medieval Venice against Los Angeles’ modern visual culture — a decision that made the exhibition all the more striking.

The piece to pay the closest attention to besides the “Triptych” is “The Coronation of the Virgin.” The piece, which Veneziano created along with his son, Giovanni, is considered a cornerstone of the exhibition as it came from the Frick Collection in New York. Although less elaborate in construction, its key accent is the detailed portrayal of Jesus Christ as the sun and Mary the Virgin as the moon (placed under their feet), a detail you could miss without careful examination.

It is Paolo Veneziano’s last known work, but it is somewhat the most sentimental in the gallery as the colors and tone give off a calming, luminous tone.

The exhibition of Veneziano’s gold-leafed, sophisticated production from the 14th century offers a good glimpse of the crucial attention to detail his clientele entrusted to his skill in creating priceless, devotional pieces that would stand the test of time.

“Unshuttering LA” is a collection of pieces from numerous artists breaking the stereotypes placed on people of color.

“Photography, historically, has been used to pin people of color in a particular location to a particular identity or stereotype, and the artists in this exhibition works to unpin that,” said Getty guest curator Jill Moniz in the New Narratives by LA Photographers of All Ages podcast. “And, to create work as cultural production that speaks to the diversity of their stories.”

A large eye-catcher is the piece “Support Systems” by photographer Todd Gray, which depicts sports as a means of freedom in a society that has suffocated Black men. According to Moniz, the idea of the piece was to invoke the daily confrontations and challenges of character that Black people face. Moniz also said the work was inspired by the anti-Black racism protests during Los Angeles’ 1984 Olympics.

The gallery serves to express each photographer’s “own aesthetics, identities and narratives,” said Jim Cuno, president of J. Paul Getty Trust. This can also be seen in “May Flowers and After Manet” by Carrie Mae Weems. It depicts an ordinary girl’s profile as a rebellion against portraits traditionally being a sign of wealth and high status in the 19th century. The piece creates a simple, yet, powerful intention: not to primarily criticize society and its former convention, but to demand “an understanding that she is here.”

If the goal was to “shake the core of photography” as Moniz said, the exhibition’s undisguised spirit clearly granted a refreshing take on who gets to tell your story and why humanity is beautiful since every individual is unique.

Overall, there’s little to complain or frown about the exhibitions; the Getty Center accumulated a variety of rooms, themes and art styles that could appeal to every sort of visitor — whether first-time guest or veteran.

Give credit where it is due