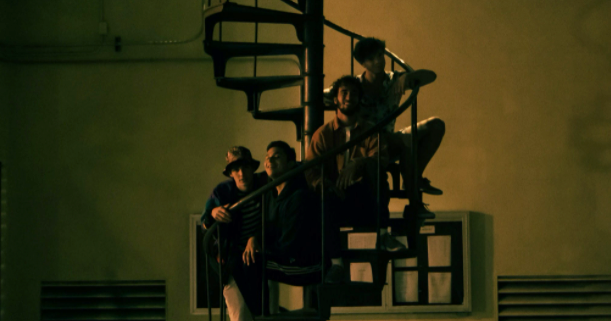 What do you get when you put a musical theater fanatic, long-time soccer player, fitness enthusiast and extreme sports traveler together in an apartment building off USC’s campus? A production company.

When the pandemic first hit, students had to adjust to a new way of learning. For classes rooted in lectures and exams, this transition seemed easier. Students in more artistic and creation-based pathways, however, were hit with unprecedented challenges.

For Kaleb Manske, a sophomore majoring in psychology and film and television production, he knew he wanted to move to Los Angeles in Spring 2021. He was looking for artistic roommates, specifically in music or film.

One night, they met Maximus Jenkins, a sophomore majoring in narrative studies and cognitive science, and after a casual conversation while hanging out later, the three roommates said “Do you want to make films with us?” to Jenkins; 4085 Productions had its training wheels on.

Making films during a global pandemic would seem like rocket science to many, but to these four, who always approach all of their work with an extreme passion for the craft and willingness to do absolutely anything, the constraints of the virus became a gift.

“It was basically [Kaleb’s] homework to make films for this class,” said Alex Nimrod. “It was this sort of thing where Kaleb was given a week or two weeks to make a film, but one of the parameters were, you can only work with whoever you’re living with and you cannot leave your living space.”

Evidently, the coronavirus put restrictions on the students at SCA, yet with roommates Rice and Nimrod, Manske had his winning cast right on the living room sofa.

“So, people are coming to this film festival, acting in these films with their parents or in their house, because it’s COVID,” Nimrod said. “Yet, we are in an apartment in L.A. with two actors that are literally dying to act and just do work, and so it became a thing that we were throwing 20 hours a week because we’re doing nothing, into these films trying to make them as good as possible. And then when we’d showcase them to the class, I mean, they got good responses.”

From a few views to now hundreds, 4085 was able to take the training wheels off and move exponentially toward building the corporate foundation of their company.  From delegating more defined roles on the executive team to roping in more students, and now working on film festivals and grant submissions, 4085 Productions is ready to cement themselves as the next big thing in Hollywood.

“It doesn’t matter if you have experience with any film before,” Manske said. “If you are interested in just being on set and watching what’s going on, if you want to be a writer and have never written a script before, that’s what we’re trying to do with this expansion.”

Their upcoming short film, “Ouch,” which will be released on Oct. 8 on 4085’s YouTube channel, is a story that touches on concepts such as addiction, mental health and other heavily stigmatized issues not only prevalent in the L. A. community but also in communities all around the world.

All of the proceeds from the fundraiser tied to this project will  go to To Write Love On Her Arms , a nonprofit organization that aims to provide hope and resources to those struggling with depression, addiction, self-injury and suicide.

4085’s role doesn’t just stop there — despite having little to no funding — for every view that “Ouch” gets in the first 24 hours, 4085 will be matching it to $1 and donating it entirely to TWLOHA.

So what’s next for 4085 Productions? Manske, Nimrod, Rice and Jenkins have the next seasons booked and in pre-production. Ideally, they’d like to take 4085 to the bigger stage and mirror successful production companies such as A24 while also developing their own niche or lack thereof.

“I think what’s really cool about being a new production company is that we are not tied to any image … our first film was an action film, our second one explored sexual identity and then our third one did human connection,” Rice said. “Those things don’t have this underlying ‘We’re doing this type of film’ and that is what we love — that we’re telling these meaningful stories in whatever way we’re doing it, but the thing that does connect them together is that they’re meaningful stories that we just feel like need to be told.”

The company aims to highlight the stories of people who don’t feel they are capable of working in the film industry, according to Manske. For these people without much experience, 4085 productions attempts to make a process as “huge” and “daunting” as filmmaking inviting and meaningful.

Considering that this company has its foundation in friendship and innate passion for filmmaking, it’s clear that 4085 Productions has more than 4,085 days of diverse and creative storytelling in store for the future.

“This is a pivotal moment for 4085, and if this is the first time you’ve heard about us, that’s wonderful. We want you,” Nimrod said.

USC bounces back with 37-14 victory over Colorado