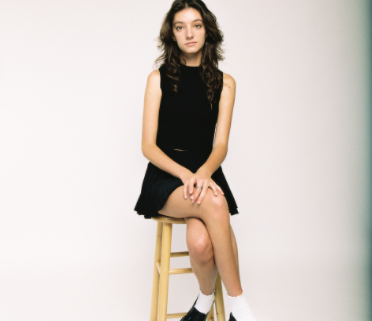 In 2013, sixth grader Alix Page nervously stood to the side of her middle school stage, anxiously awaiting her big talent show debut. After 10 years of humming around the house and a childhood filled with “The Cure” and “Depeche Mode” on repeat, she had music coursing through her veins.

Page, now a sophomore majoring in popular music, has watched her stage fright quickly dissipate as she plays originals for a myriad of audiences in venues across the country. Page crafts music for the melodramatic masses and gets the recognition she deserves.

Page has already garnered more than 18,000 Spotify monthly listeners. She has worked tirelessly to create a tracklist that oozes with palpable emotion and unforgettably sweet and airy vocals. If you are in the midst of a quest for a new anthem that perfectly encapsulates the feeling of heartbreak, she’s your girl.

Although Page has fashioned a raw discography that attracts listeners across the globe, music has not always been at the forefront of her life.

“I didn’t grow up with a musical family at all,” Page said. “My immediate family just watched ‘American Idol’ once in a while and listened to the radio, basically.”

Although, Page may not have been raised to conform to a musical standard, her passion for music is intrinsic and personal. After a few talent shows and a short theater stint, Page and her family recognized the bounds of her talent, and she attended an arts high school.

Page’s natural inclination toward music and sonic individuality is even more evident in her songwriting process. Most of her writing derives from instances of raw emotion that overflow from her brain into a verse or chorus. Page believes this spontaneous and impassioned method of songwriting served her well on her recent collection of releases.

For instance, her most popular song, “Stripes,” is poignant. She fosters relatability among listeners who struggle with heartbreak in her lyrics: “I still have the T-shirt I bought you / Never found the right time to give it away.”

“I started listening to ‘Stripes,’ and, then, a few seconds later, my eyes were pouring water,” said Cole Silberman, Alix’s manager. “When she creates something, she is really writing from an authentic story that she’s lived through.”

Silberman said he was distinctly moved by Page’s lyricism. He reached out to her shortly after this cathartic listening experience, and they eventually decided to work together. Silberman noted that Page’s music is so special and unique because of its gritty honesty. From the start, he felt a connection to her as an artist and person because of her ability to transform candid sentiments into melodies.

Page puts a copious amount of effort into echoing this sensation within her songs. She is supported by a team that wholeheartedly backs her projects and aligns with her values. Her drummer, Caleb Tischbern, a junior majoring in popular music, finds himself consistently blown away by the songs that Page presents them. He is eager to continue their collaboration along her journey and remarked that he foresees a very bright future for her career.

Page has curated a distinctive career thus far but anticipates far more excitement and new opportunities in the near future, she said. In November, she released a new single entitled, “Radiohead,” and has her first ever EP prepared for release soon. Additionally, Page will join Claud and Gracie Abrams as an opener on their respective tours in the beginning of 2022.

Page believes her work is so memorable because of the soul-stirring reactions that it engenders in listeners. She has studied the way that her preferred artists craft their preeminent tracks and synthesized these techniques into her own art.

“My favorite songs are my favorite songs because I relate to them,” Page said. “I’m always like, ‘Oh, God, that is exactly how I was feeling, and I feel like that is always just the goal: relating to people and just making something that sits well in their ears.”