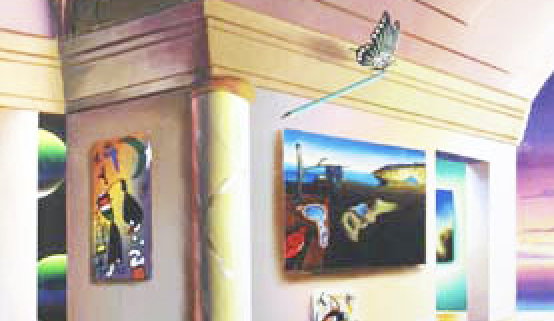 The hallmark of a great artist is the ability to directly connect the past with the present. One of the leading artists exhibiting such a connection today is Ferjo.

Born Fernando de Jesus Oliveira in 1946, the Brazilian artist has become a leading figure in the modern American art scene through his unique art style.

Ferjo takes inspiration from great masters of the past, such as Vermeer, Van Gogh, Renoir, Picasso, Dali, Miro, Da Vinci and Michelangelo. His style combines cubism, abstract expressionism, realism and surrealism. Ferjo directly recreates pre-existing artwork in his own paintings, highlighting his understanding of the past. Rather than completely departing from old techniques in favor of new styles, he continues to mold painting in a new way by combining the old with the new.

In “Persistence of Time with Miro,” Ferjo’s eclectic style is revealed through his references to Dali and Miro. Dali’s painting, “The Persistence of Memory,”is fully recreated in the center of the painting. The surrounding artwork depicted is stylistically similar to those of Miro, fully paying homage to the Abstract Expressionism movement.

In addition to directly recreating past artwork, Ferjo adds his own touch by creating a new space altogether in which the other artwork is present. The room depicted in the painting feels like a snapshot of a much larger space, creating a double viewing effect: The audience sees a painting of a painting. This layering helps Ferjo draw the viewer in.

Through Ferjo’s work, his viewer experiences a new relationship with the surreal, seeing its evolution from Dali and Miro to this piece. This feeling of spatial compression explains the revolutionary nature of Ferjo’s painting.

From a stylistic standpoint, Ferjo’s ability to recreate artwork shows his versatility. However, the most crucial part of Ferjo’s work is an innate emotional connection formed between the viewer and the work.

Through his paintings, Ferjo depicts a whole new take on reverie. Looking at “Persistence of Time with Miro,” the viewer is already transported to an different other-worldly space, through the vibrant colors and out-of-place figures in the foreground. After further interaction, the audience is lost in Dali’s painting.

As a singular entity, the painting seems to represent a much larger space, and the viewer wants to see beyond the edge of the canvas. There is something appealing about the idea of a world within worlds, and by connecting so many styles and artworks, Ferjo very clearly feeds on this paradox. However, the emotional appeal is effortless.

Looking at the image, clearly other-worldly, I cannot help but feel a strange sense of calmness. Whether this is because of a universal truth at the core of this painting or the desire to find truth in this image, I cannot say.

One of the beauties of abstract art is the instantaneous emotional reaction it evokes from the viewer. And this painting — an oscillation between complexity and simplicity — does a perfect job acting as a window for the viewer to stop and imagine something beyond the tangible world.

Ultimately, the viewer leaves anxious and hungry to see more.

Dali knew this. As well as Miro, Da Vinci, Michelangelo and all the rest, including Ferjo.

Jina Umakanthan is a freshman writing about the continuous relationship between present and past artwork. Her column, “The New Renaissance” runs every other Monday.