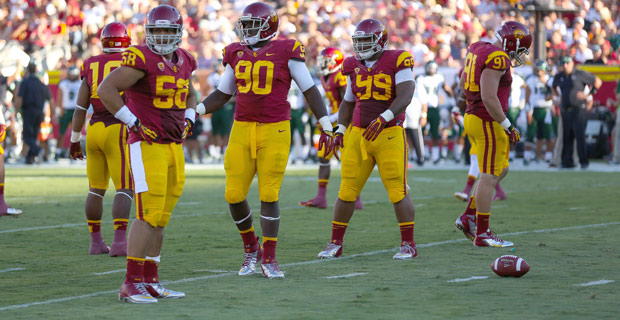 The depth behind them was even more tenuous, with three freshmen and junior defensive end Kevin Greene comprising the second rotation.

No one quite knew how five of the eight defensive linemen making their USC debuts would fare and many anticipated prolonged growing pains, much like the Trojans experienced last season when introducing three new starters to their offensive line.

“There were a lot of question marks [on the defensive line] coming in,” USC coach Lane Kiffin said. “It seems like they made a bunch of plays up front. The defensive linemen that played [Saturday] were a lot different than last year.”

USC’s defensive linemen performed well Saturday in its 49-10 win, combining for four of the team’s five sacks and rendering Hawai’i quarterback Sean Schroeder’s passing pocket virtually non-existent for most of the game.

“The whole [defensive line] got pressure, especially up the middle,” sophomore J.R. Tavai said, who converted from nose tackle to defensive end early in fall camp because of depth concerns at the position.

After playing in seven games at defensive tackle last season, Tavai, who recorded three tackles against Hawai’i, has found the transition to defensive end challenging, but more suited to his strengths and 260-pound frame.

“Rushing and more one-on-one [battles have been the biggest adjustments],” Tavai said. “There’s more responsibility to get to the quarterback.”

Senior defensive ends Wes Horton and Devon Kennard were slated to wreak havoc on opposing offensive tackles this fall, but Kennard tore his pectoral muscle lifting weights in July and Horton only participated in fall camp sparingly while rehabilitating for an undisclosed injury. Though Kiffin is not providing a timetable for Horton’s return, the general sentiment is that it’s not something that will sideline him long-term.

With their absences and the departures of defensive end Nick Perry and defensive tackles Christian Tupou and DaJohn Harris to the NFL, USC needs some of its younger talent to mature and contribute immediately.

Perhaps the defensive highlight of the night occurred when sophomore linebacker Hayes Pullard intercepted a pass and returned it for a 27-yard touchdown.

A closer review of the play revealed that Williams, a native of Daytona Beach, Fla., hit Schroeder during his follow-through to force the errant throw. Not merely satisfied with the interception, Williams continued the play and bulldozed a path for Pullard to follow into the end zone, finishing with a punishing block on a Warrior defender.

“The [defensive line] really stepped it up today,” Williams said. “I had a really good time playing with them.”

Not to be outdone, Breslin was often in the Hawai’i backfield pressuring Schroeder. He finished with five tackles — an impressive total for a defensive end — and one sack for a loss of two yards. Those figures fail to capture, however, the sheer number of times Breslin hurried the quarterback and forced off-balance throws.

“I was very proud of those guys,” Kiffin said. “I have to look at the film [to describe their play in more detail], but [Breslin] and [Williams] really flashed.”

USC’s young defensive line must create similar penetration against better future competition and still hold up against the run — the team gave up only 1.75 yards per rush against Hawai’i. If the Trojans can produce similar performances, the team defense might be the best it’s been since 2009, the last year USC won the Rose Bowl, which was a 38-24 victory over Penn State.

For now, the young defensive linemen are hoping their play will soon inspire more outside confidence in the unit.

“A lot of people, they look down on us, like they aren’t really encouraged about us,” Williams said. “We just have to get ready for the next game.”

Trojans impress in season debutTrojans fall to No. 2 in new Associated Press rankings
Scroll to top